On Saturday, the 19th our group of wargame buddies will run a table top game featuring the assault on the redoubts at Borodino.  We'll run from 11 am until it's done; there will be thousands ( as in more than 2,000) of 28mm troops on the table, which will include some custom built terrain.

As part of my contribution for the Russian force, I am bringing 4 grenadier battalions, 8 line battalions of infantry, four batteries of guns and six cavalry regiments. In the first photo we see the cavalry column which consists of a Cossack regiment, two Hussar and two Dragoon regiments.  If you've read the progress reports (posted from July through October) you seen most of these fellows- although now they sport spiffy basing!  The cavalry in this shot are Old Glory. 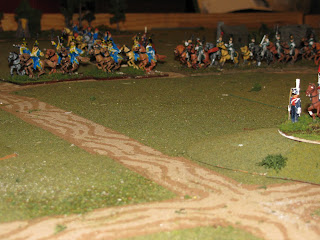 Next up, a view of the middle and rear of the column as it winds its way to the battle,  with two of the grenadier battalions following. There is also a horse artillery battery in there somewhere, with a better view in a later photo. The cavalry again, are old Glory, the Grenadiers in the background from Sash and Saber.  The flags are from Warflag, courtesy of my HP inkjet printer.  The out of focus generals and staff are Minifig, over twenty years old but still able to take the field. 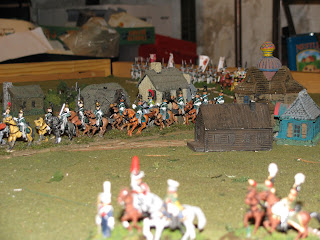 And to round things out, there is the infantry division, with the corps artillery on an adjacent road.  The Corps Commander and the Artillery Commander view from a convenient hilltop. 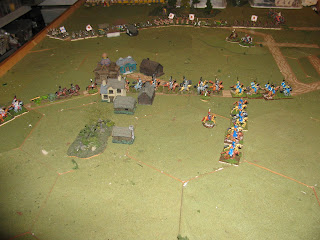 Oh, a close up of the horse gun.  Unlike some of our local gamers, I like to have a limber team at least for the horse batteries, for the very reason they don't like...the table space that the limbers and teams actually took up on the field!  Hmmmm, I may have to get more of these for the summer! 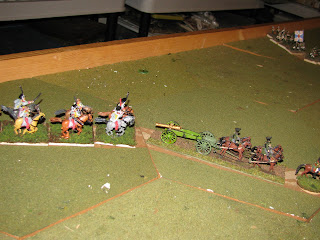 If you are from the CT or Eastern Mass area, consider coming to the con.  There is a surprisingly wide variety of games, the con is a fundraiser for the schools gaming club, there is always an interesting group of flea market items for sale.  Did I mention the food is onsite, very reasonable, and helps out the schools PTO? Google 'Ellis Con' for directions.  One day, the 19th, from 9am to 9 pm.
Posted by pancerni at 8:33 AM 1 comment: