With apologies to non campaign players, this post is mostly minutiae on how our imaginations campaign is going to work.

The question came up, how/when the first turn is accomplished.  Basically in my mind this will breakdown into two areas.

The first is economics.  Since I want to get away from drachma counting ( nothing more annoying than explaining my spreadsheets) I have decided to go with an activity based system.

Since everyone in the campaign is familiar with either FoB or Piquet, I am fashioning a set of tables for modifiers on revenue and what you do with it. I hope this allows you to be rulers and not bean counters. It should also give me leeway to adjust the tables without reworking balances.

Since the movement/deployment will work via the Theater of War system, and the rosters are all in, the revenue will work for the non land battle side of the action.

Each ruler starts with a shiny D20 as the first spending roll. The difficulty die is always a D8. Each additional role is 'down' a die type, so D12, D10, D8, D6, D4.  You only get one roll at each level. The astute players will notice there are 6 choices to make per turn, they can go to only one or up to six categories of use.  Oh, btw, I will be doing the rolling based on your instructions. You can list what order of the tables you want the die rolls.

Espionage: negate a spy in your territory, create a spy for another country, up 2; create a master spy (controls up to 5 spies) up 1; break up a known spy ring, no change; discover a previously unknown agent, down 1; major coup, down 2.

I will be making up charts for populace support and engineering, military.

I will also make a chart up for deleting 'dress' cards from the tactical deck, that will take me some time to put together. Imagine taking out  a 'dress' card and replacing with an extra officer check or melee resolution card. So: naval, espionage,national pride, populace support, engineering- military, and tactical deck adjustments.  Six tables.

A Chosen Men scenario: Capture the Flag (modified) at 350 points-ish.

Late fall 1799.  (within weeks of Incident between Daharra and S'Gotland) 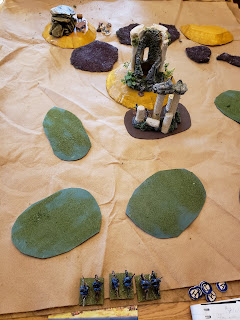 The lay of the land, sweeping plains, dotted by small areas of vegetation and an old ruin. A local sheperd and his flock while away the time at the top of the photo. 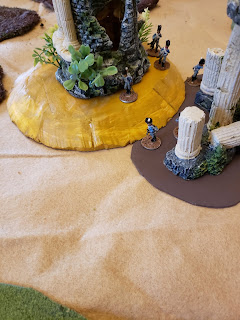 A small S'Gotland cavalry patrol, bereft of its horses, hiding in the ruins awaiting succor. 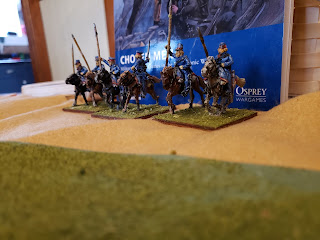 Lo, a unit of mighty Cossacks, who actually come into their own in these rules. 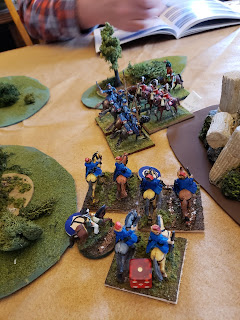 The game had both side field cavalry units, these  got stuck in quickly, as above a unit of S'Gotland Light Dragoons (in red) tangle with a unit of Cossacks. 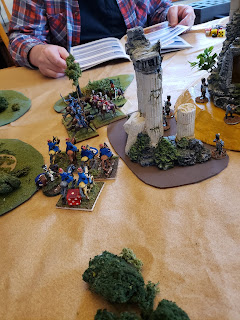 The Fuddland major leads a second Cossack unit to support the first. 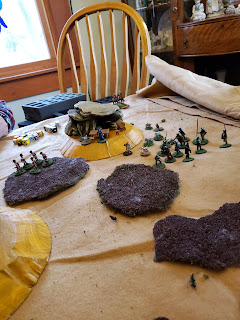 The remainder of the S'Gotland force decides to watch the mounted units battle. The shepherd takes his flock to the save for safety. Too much commotion is not good for them, anyway. 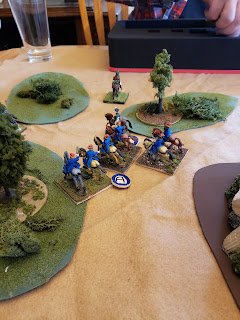 In the end, numbers prevail as the second unit of Cossacks defeat the light dragoons and eventually capture the commander of the S'Gotland force.

While less dramatic than events on other borders, the border clash underscores the fragility of peace on the continent. What will the year 1800 bring?

The report is from a Chosen Men game played on the last Friday in January. All the usual suspects were there. The forces were to be 300 points, or close to it.  The wagon was neutral, a moving objective, never got to move as the game was over by the start of turn three!


It was a nightmare. A simple mission to deliver a diplomatic letter, a message of peace, unraveled by a series of blunders. The Daharan government  sent Dame Lucretia with a small escort of light cavalry and light infantry 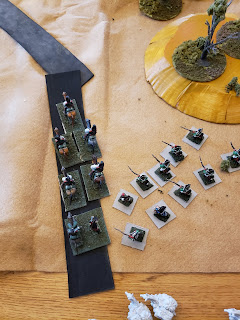 The escort was due to the countryside being in turmoil, with forces of S'Gottland, Daharra, the Dual Monarchy of K&K and Obajosa with claims to the area, all off which were disputed by the local Basque forces. 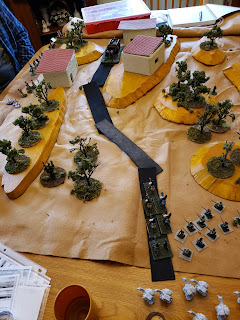 The situation did not look dire at first.  The road to the S'Gottland city ran through a small valley, a trade wagon approached in the opposite direction. The Light Cavalry moved ahead to scout. 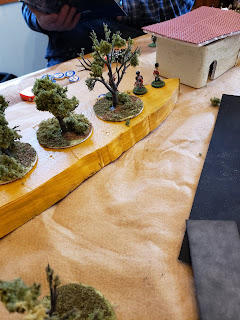 From over the left ridge came a group of S'Gottland (Highland) Light Infantry.  To this day the reason for them shooting at the Daharran cavalry is not known. 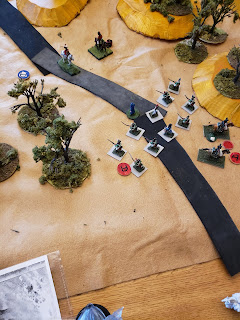 The fire downed two horseman. Worse still was the subsequent attack by a unit of S'Gottland Light Dragoons (evidently the thought was, if the rifles are shooting at them, we should charge them.) The Daharran mounted unit was savaged, retreat was covered by the rifle armed Daharran Light infantry.
Lady Lucretia wept for the lost opportunity.  The S'Gottland cavalry ensign  reported a glorious charge on the 'enemy' although vague who exactly it was he and his men dispatched.  The driver of the trade wagon was relieved of some of his cargo, which turned out to be illuminated Daharran religious tracts.

Having been talked into a series of games to try the Tribal/Primeval   rule sets, Greg & Roger were over the penultimate Friday in January for a shot at the co-operative 'Hunt' scenario. I am not sure how co-operative we were to one another, but the rules have held our interest over several Fridays now.

The tribes represented were the Cromagnon (me), the Neandertals (Greg), and the Denisovans (Roger).  The available game animals included Terror Birds, Gnus, a mastodon and a giant sloth.  Just visiting and also on the prowl for lunch was a saber-tooth tiger. 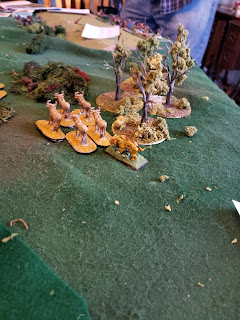 The tiger ate first (who were we to argue?)  As the rearmost gnu became first course. 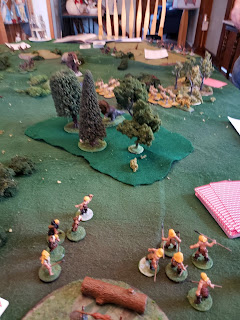 My fearless leader (Cookla), just off camera, saw the carnivore occupied.  Thus hatched his masterful plan of "let's go the other way." 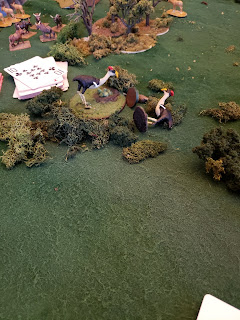 The Terror Birds, despite their name, seemed less a challenge. Several arrows polished off one large and the small bird.  the other large bird retreated, the eggs were left for the Cromagnon larder. 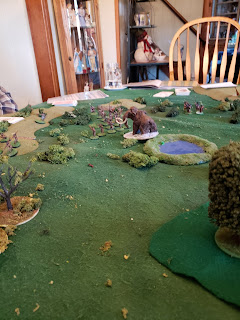 Ahlee, (Roger) leading the Denisovan, found the mammoth intimidating as it mistook his band for someone that the big fella had a grudge against. 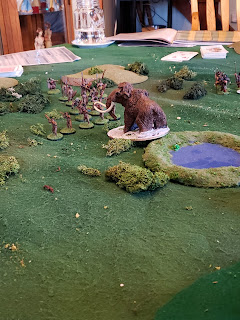 Luckily, pelting the Woolly Bully with a shower of sharp sticks and pebbles convinced the ivory tusk delivery system to look (and go) the other way. 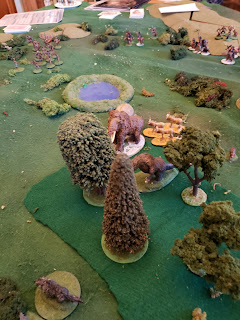 Now both the Giant Sloth and the weakened Mammoth became budding arborists.  To the top right of the photo the Neandertals, led by Phran ( Greg), wistfully watch the gnus flee both the the tiger an the Denisovans. Drat, roots and berries again.

Actually, with the 'honor points' system in the rules, the Denisovans came out ahead despite some casualties (they did get a gnu in late game.) I tried, but the Cromagnons did not get credit for inventing the omelet at this time.  Something about pottery, whatever that is.

Greg provided the various humans & animals with the exception of my gnus. Terrain was mine, it was easier to schlep form the cellar than anywhere else. Apologies to 1960's song writers and 1950's puppets. Mana Games (Australia) produces the rules.  Bad jokes were mine.

We  will play these rules again, and the Brutal supplement may allow us to port into other periods.
Posted by pancerni at 1:50 PM No comments: