Couldn't resist.    I thought I was all done with Russian infantry and artillery. Then I stumbled upon these heavy duty pieces by Eagle Figures.  One is listed as a 40 pound howitzer, the other a 18 pounder..I purchased them in the battery packs, you can get the guns or crew separately. 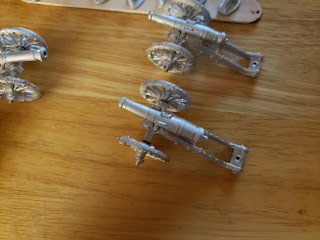 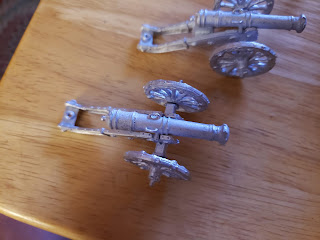 They come packaged two in a battery, with crew. Since I desired a few big pieces for sieges,these will fit the bill. Mounting them will be more involved than normal, as they will be be portrayed as in battery positions. 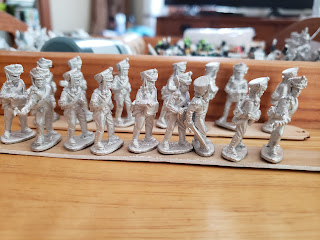 Crews for the pieces. Nice variety of poses. 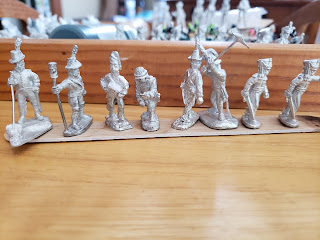 I also picked up a few Swedish sappers. Happy with those as well.


This was my first order from Eagle, the figures came well packed and flash free.  Photos show the quality, service was excellent.  Ian from Eagle cautioned that shipping could take up to 6 weeks, but I am happy to report it only took three weeks to arrive!

All this is to support future siege games in our imaginayion campaign. Great fun!
Posted by pancerni at 3:42 PM 4 comments:

Smaller can be better, poison is not good for you, fear the big guns.


We played a two player scenario as it was just Greg and I om the 19th.  The scenario was 'Get Freddy' or something like that, an attempted sweep up of a thief who has important information.  After the last, big 3 way game...a smaller scenario, fewer figures, but still an exciting prospect.

Greg used his favorites, the King's Musketeers, included Jean, Natalie and D'Artagnan.  I could not resist trying the 'Order of the Broken Cross' faction, bringing Sepp (leader) Klaus (poison gas thrown potions) and Sister Ada, (who carries whips & chains ) in a change from the ''Defenders of the Crown' I usually take. 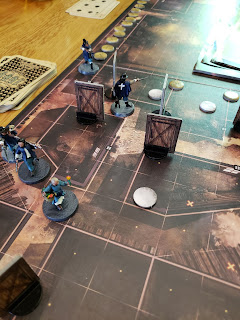 The Musketeer faction after Turn 1 moving.
D'Artagnan and a musketeer are on top of the photo, Jean, Natalie and a second musketeer are lower in the board. The white markers indicate possible 'Freddy' locations. 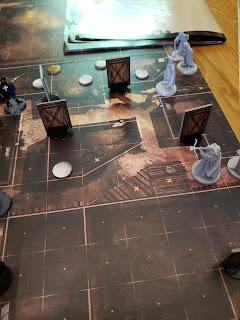 Two knechts work their way on the lower alley, Sepp, Ada and Klaus head down the upper alley. 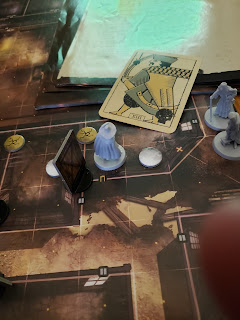 Sepp gets in a room to search for the thief, card shows the thief not present.

The game mechanic involves picking a card from the 'event' deck and checking card value against a chart. The first test, very hard to get a success. 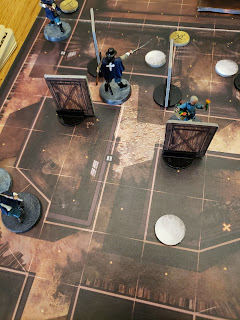 D'Artagnan  gets ready for the second room check.
Natalie is at the door for the third check. 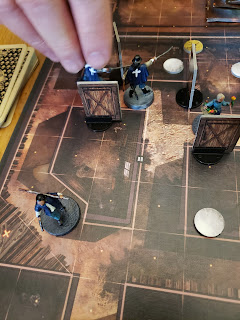 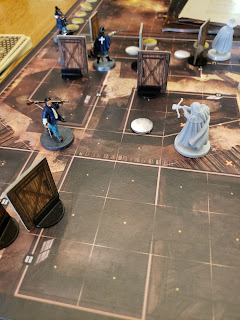 A knechte, the commoner type from the Broken Cross faction, advances and gives Jean two wounds from a crossbow hit. 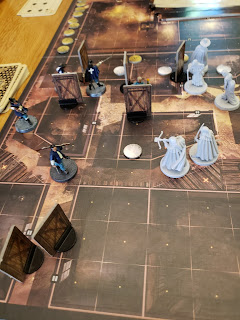 Jean Fires back, cripples the assailing knecht. The second knecht moves up. The two knechts advance to take Jean under fire. 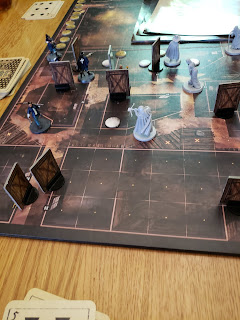 One knecht leaves the board due to a morale check failure, Sister Ada moves forward in the upper alley. 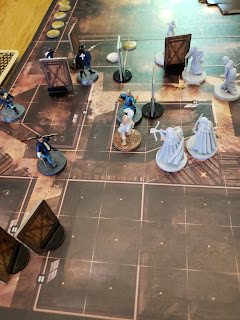 Natalie swoops into the room , finds the thief.  Jean does a 'quick reload' off camera.

Finding the thief is  the easy part of the instruction. Now the thief must be convinced to 'come along' with one faction or another.  This is accomplished near the end of a turn with a test based on character abilities; or not. No longer needed, the other counters are removed. 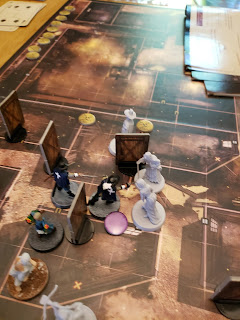 Here began a fierce encounter between Sister Ada and Klaus versus D'Artagnan. A thrown potion, signified by the purple counter, knocked down the young Musketeer. His clean living and the inability of Sister Ada to inflict much damage occurred over two rounds of melee. Such was the main reason that Natalie, trying fervently to convince the thief to come with the French finally succeeded on the third turn of trying!.

Meanwhile, the night was split by another great noise as Jean shot the second knecht , using his cavalry pistol to cripple his foe. 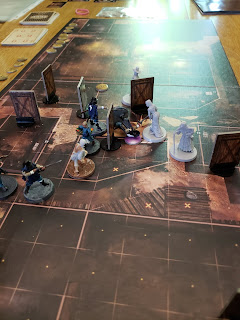 While the melee and talking go on. 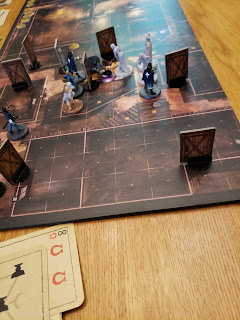 And on. And then D'Artagnan stood up!

I am sure the prone figure rules need to be reread, although, it was D'Artagnan after all!  Once the second knecht was out of the game...the final wounds delivered by the musketeer backing Jean up....and the thief firmly in tow by little Natalie, we called the game. The King's Musketeers could get the thief off board with at least a turn to spare, D'Artagan and two musketeers would hold off the other faction. 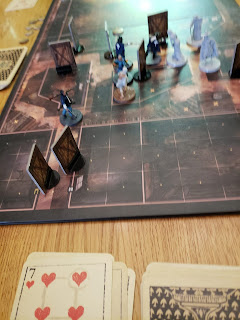 Where everyone is when we called it.  With D'Artagnan vertical,
Posted by pancerni at 5:28 AM 4 comments:

As part of the summer's painting, several projects partially done recently have been moved to the front of the line.


There is also an expansion of the dismounted British light dragoons in Talreton...love the uniform; 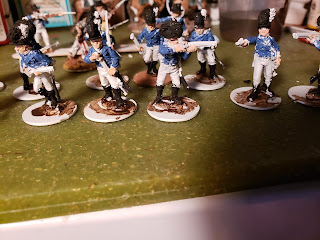 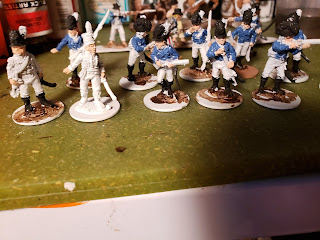 You can see a naval rating or two in the back rows.  They will be featured when they are done.

and some naval landing party and KGL/95th
Posted by pancerni at 10:57 AM No comments:

We have a few NPC countries in our imagination campaign, patterned mostly after smaller German states, Sweden and The Netherlands. Mostly I wanted to portray some Bavarian troops so in progress are some Bavarian light infantry.

The figures are from the Perry's Bavarian Napoleonics line. There are packs of lights skirmishing, light infantry command,and the rifle armed 'schutzen' figures. There is a decent amount of variety, even including two different musicians and a sapper. 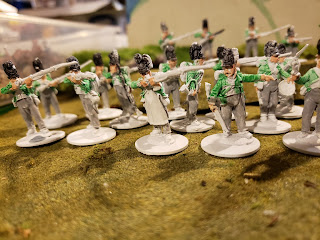 The front rank has a sapper with a white apron and NCO with rifle. 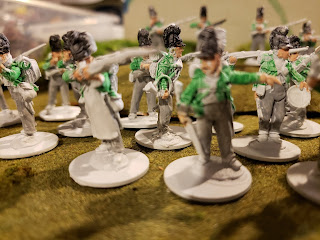 In the second rank, a drummer and hornist.

Obviously a WIP, the coats are delta ceramcoats 'Spring Green,' the pants Americana 'Slate Grey.'
Mounted on 7/8" fender washers, they will get a PVA & sand base with a dark brown base color and various flocking treatments.

Also, in the pipeline are my first figures from Front Rank, some Hanoverians mounted again singly, to provide a unit for 'Chosen Men.' 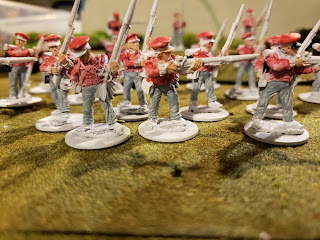 These do promise to paint up easily. So glad I stumbled upon the range.

The coats are in a delta ceramcoat 'bright Red' with trousers in the same company's 'Dolphin Grey.'

I finished a second battalion of Napoleonic era Russian Jagers from the Perry brothers miniature line. Differing from the earlier unit in that they are mounted individually to be used in games of 'Chosen Men' going forward.  The main color is delta ceramcoat "Black Green."  The blanket/great coat roll is done in "Hippo Grey" by the same company. 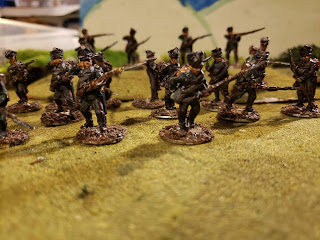 I did use a wash to cover any gaps in the painting, and to get some detail in  the hands and face.  The results are a little dark but please me.  The unit is made up from 3 packs of Russians in firing positions and as such have no musicians nor officers. 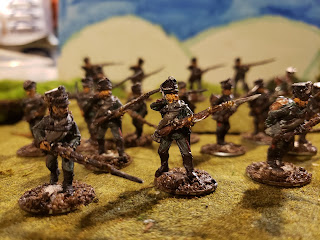 I have several units in the queue for 'Chosen Men' games as I found the optional Austrian and Russian pages on the author's website; these allow our imagination campaign to have some variety in troops as well for the smaller actions.