Just a few ogangsters and street toughs, and three ladies of Spain

The gangsters are from Brigade Games  and are part of about 15 or so I will eventually paint up as 1920's and 1930's denizen's of ill repute for my police to battle. From baseball bats to tommy guns, the range is a good mix of bad guys. 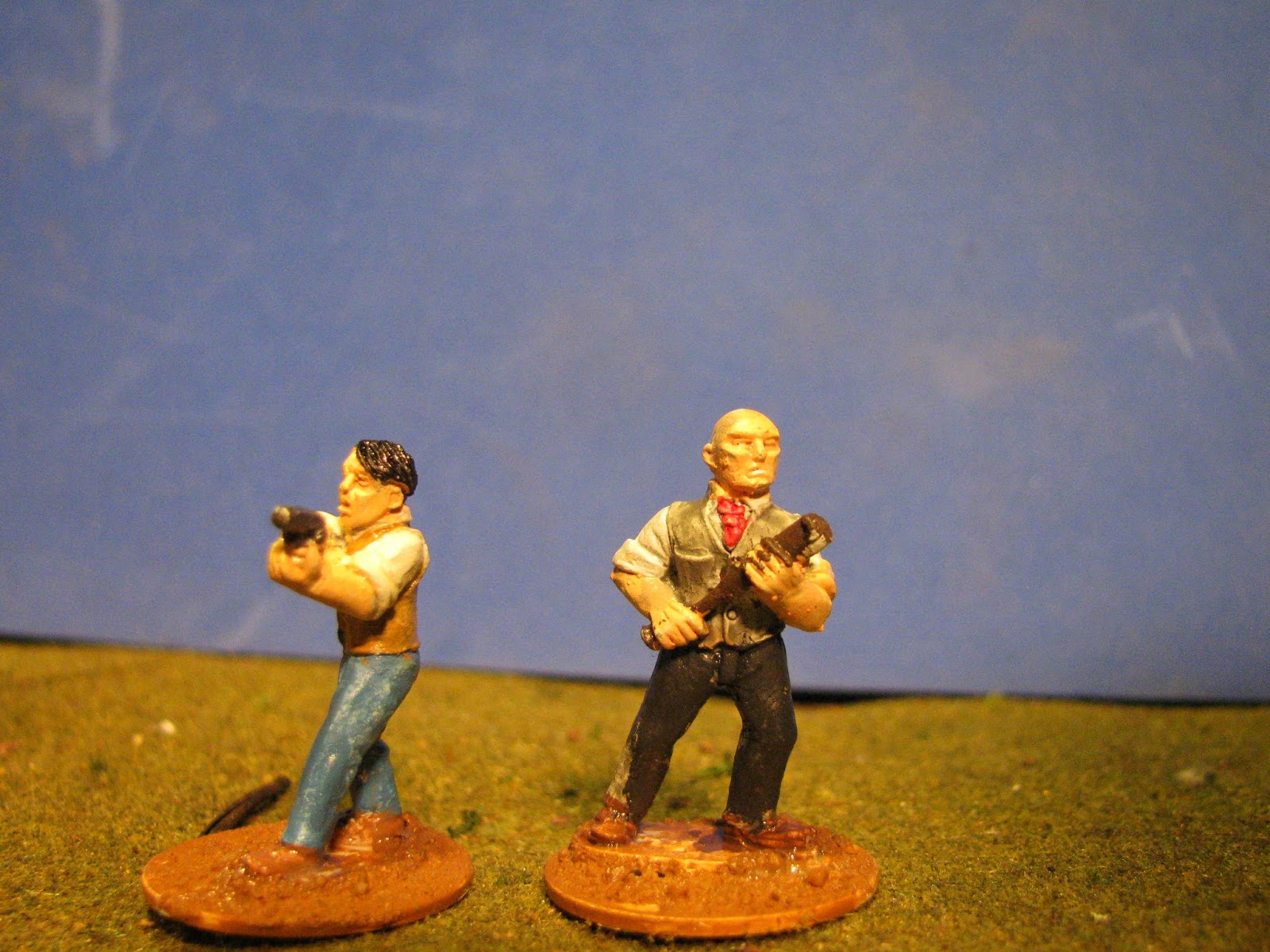 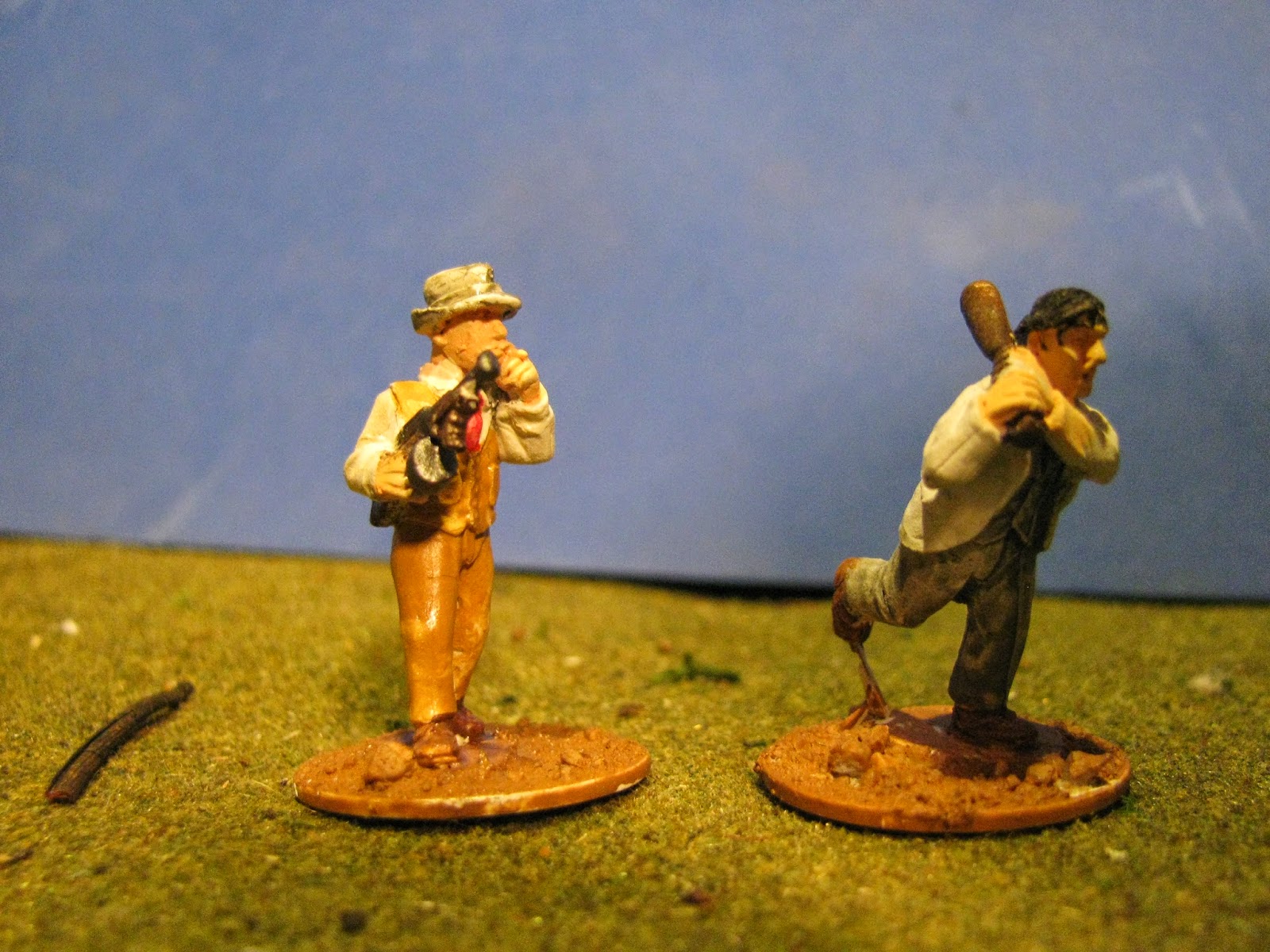 These are three milicianos from Empress Mini's Spanish Civil War line.... I have about a dozen or so other militia figures to paint up. 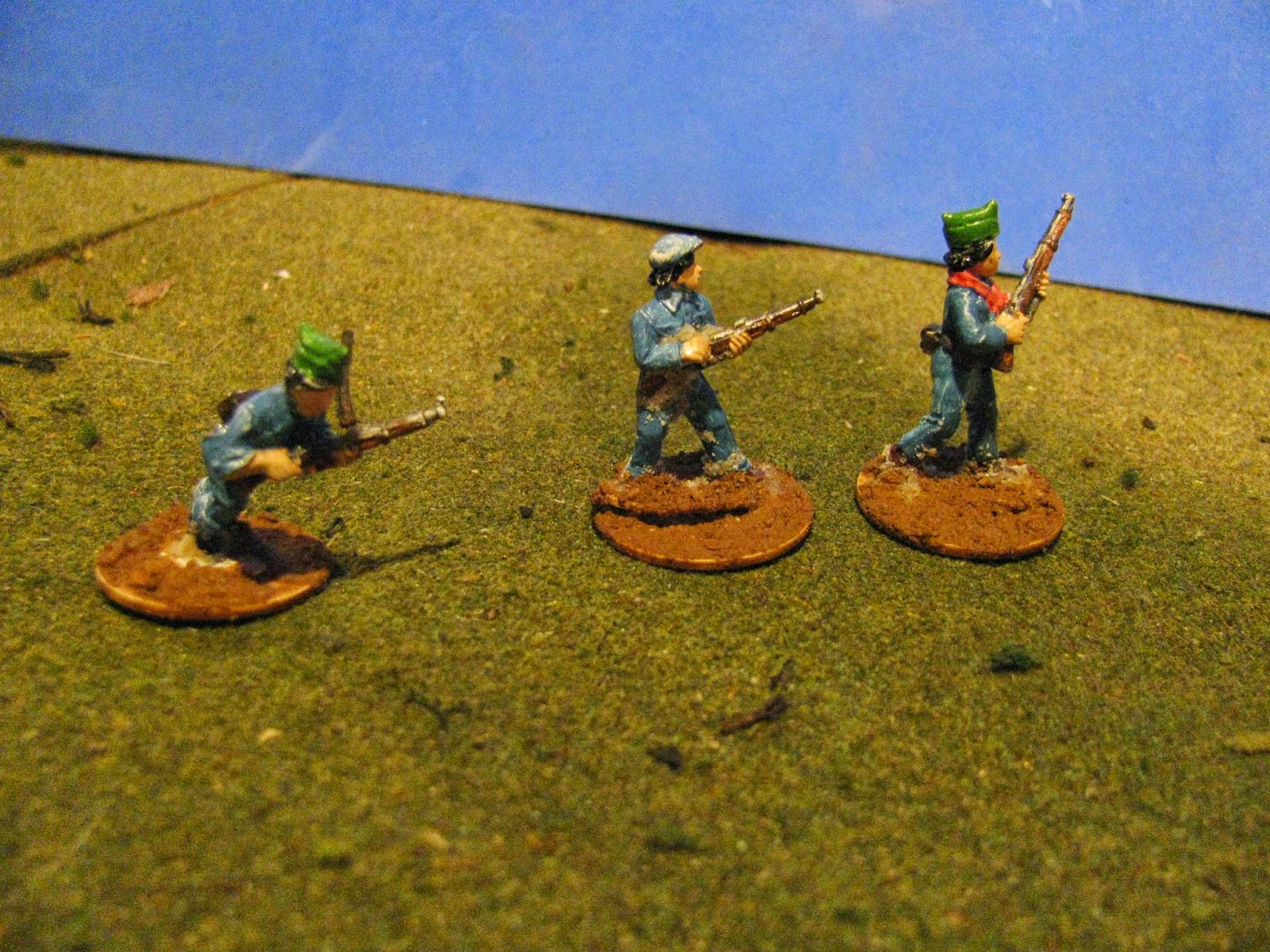 The last figure I've painted this week is an adventurer from Pulp Miniatures, one of a great pack including a pilot who looks to be from the AVG  as well as a fellow with a bullwhip, more on them later. 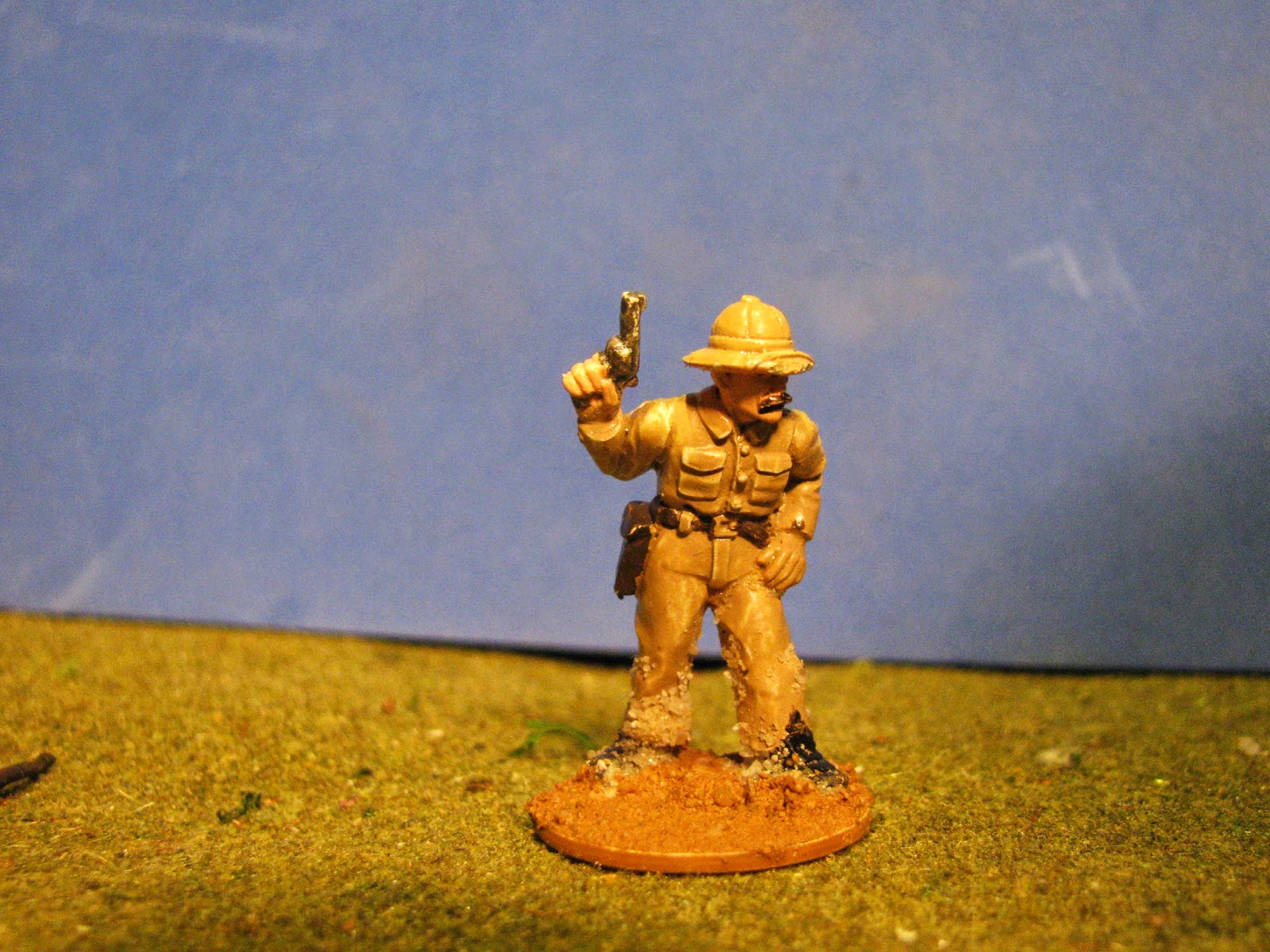 Posted by pancerni at 6:44 PM No comments:

Last unit readied for Hostile Realms game, the mounted Squires of the Realm

A unit of spear mounted cavalry, clad in leather armor whose main job it is to scout and hold flanks against infantry units, in a pinch they can support heavier armored units in a charge. 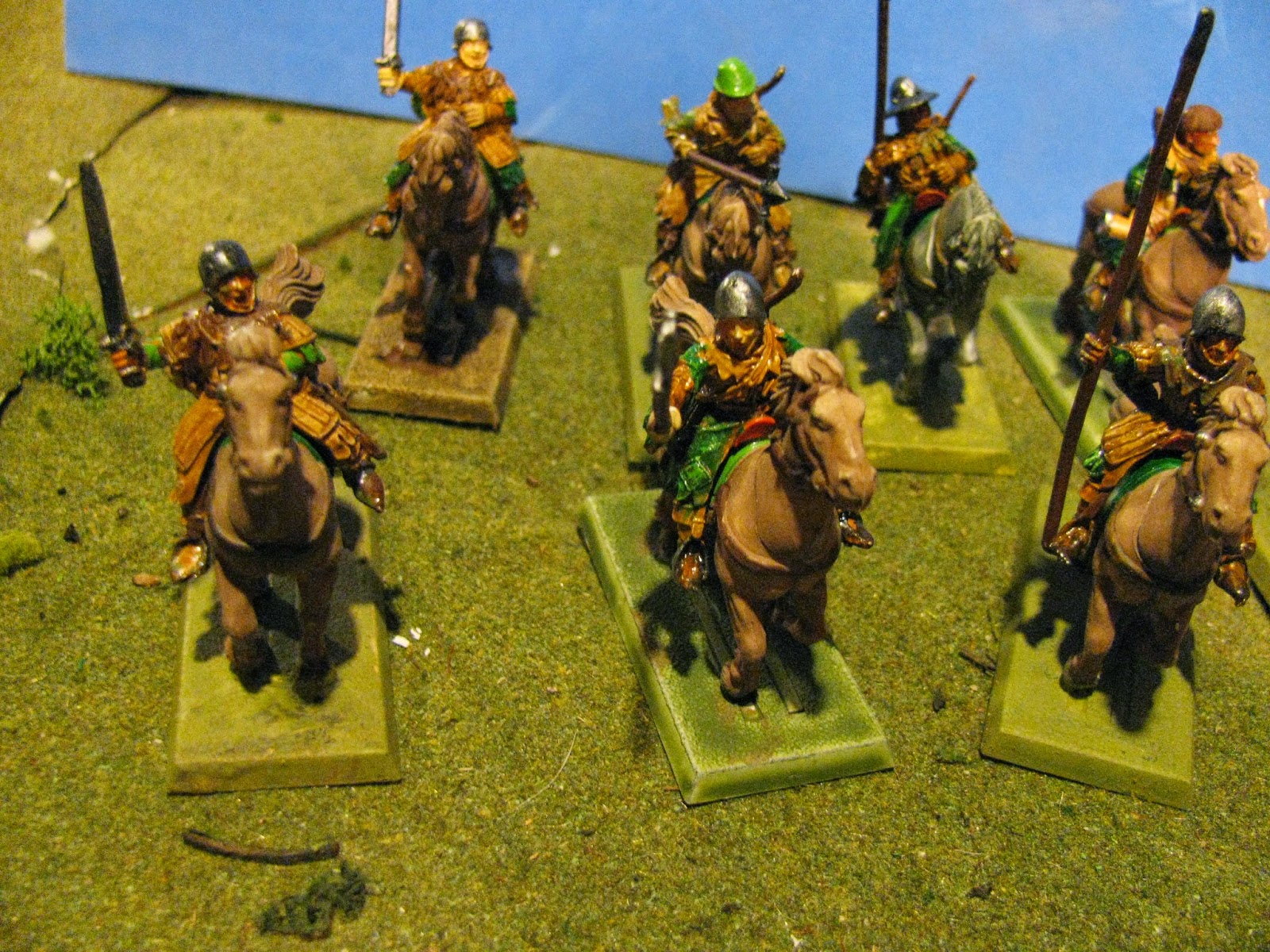 The figures are from the GW Bretonnian range circa 1996 and represent the last unit to be painted for the game, being finished up Friday.   I believe the figures are sculpted by the Perry twins, as many of the figures in the Bretonnia range were.


By reviewing the box of unpainted lead, I still have 4 Knights of the realm, four spear men, four archers four more of the mounted squires and 5 each Questing and Grail Knights which could conceivably be put into the filed when painted. Maybe someday, sigh, after all the other projects are done!

They'll be making their debut at the Time Machine next weekend, as part of a revised 'Middle Kingdom' army.

It would appear that no project ever truly dies. Next weekend I get to trot out the old GW fantasy army full of knights and archers, although to use in a different game system.

Hostile Realms is a set of rules for fantasy  armies which is aimed at large battles by Piquet..  Magic is present but less important than in some systems.  We've had a good result in the Lord Kalvan of Otherwhen era. So, with a week to go to gametime, let me make the rounds with the army of the Kingdom of the Middle Griddle.

The realm is dependent upon the call out of the knightly class, mounted on wonderful charging steeds and brave to the point of foolishness. One unit of the 'King's Household' and three units of the various Dukes, barons, Viscounts, etc, make up this portion of the list. 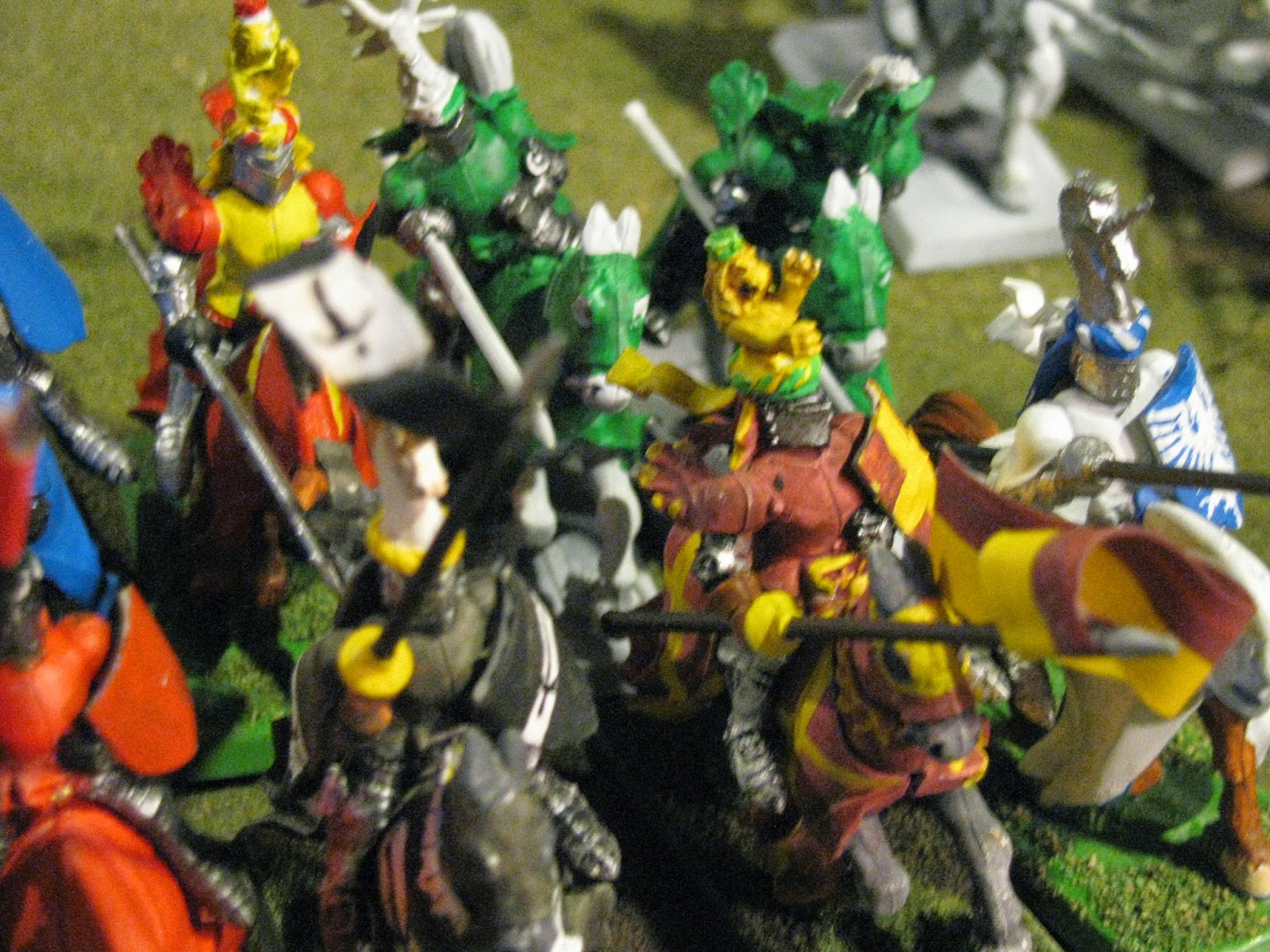 Some few of the knights must be completed, but you get the flavor from the photo. 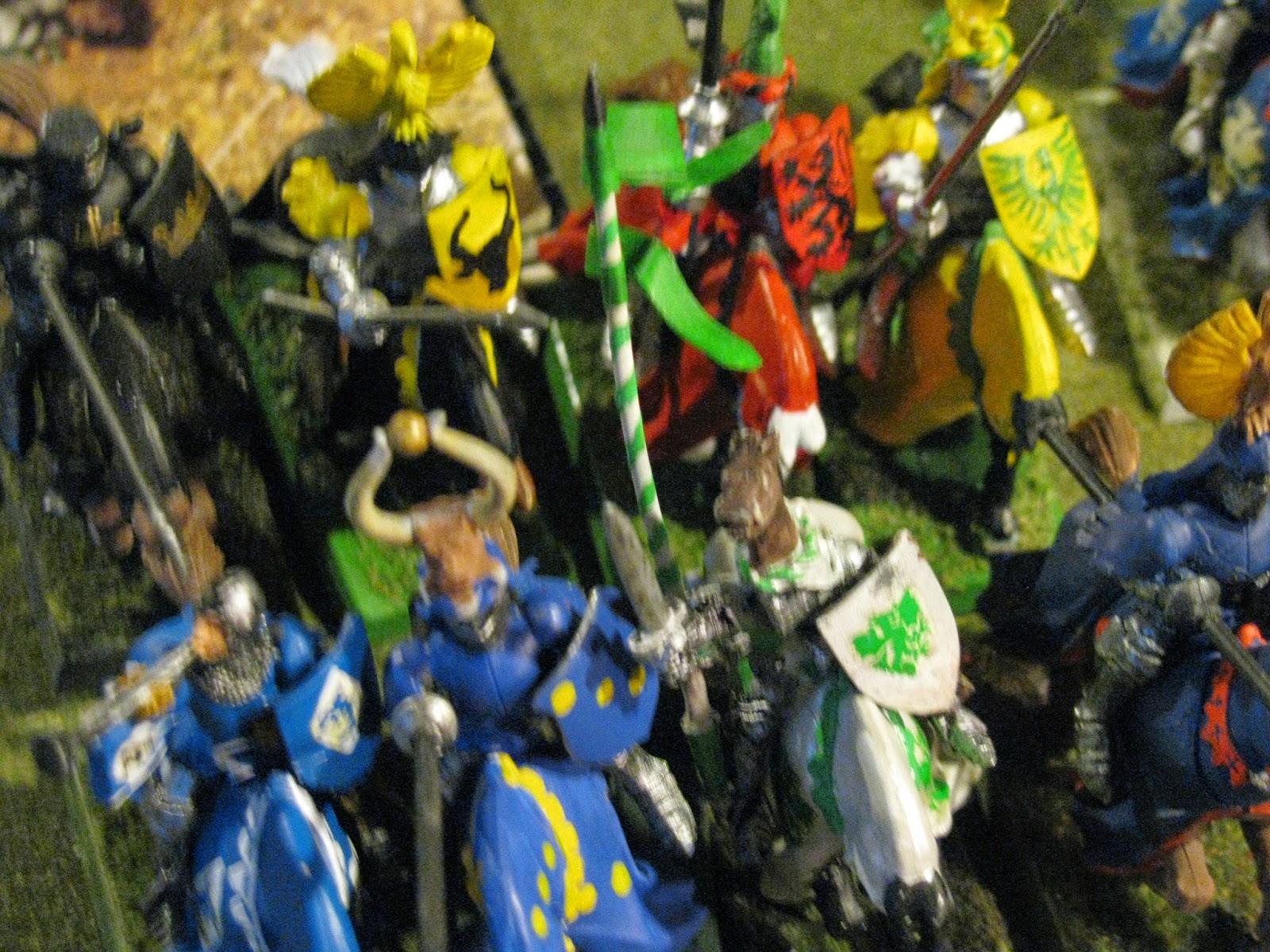 Now these fellows are properly accoutred. 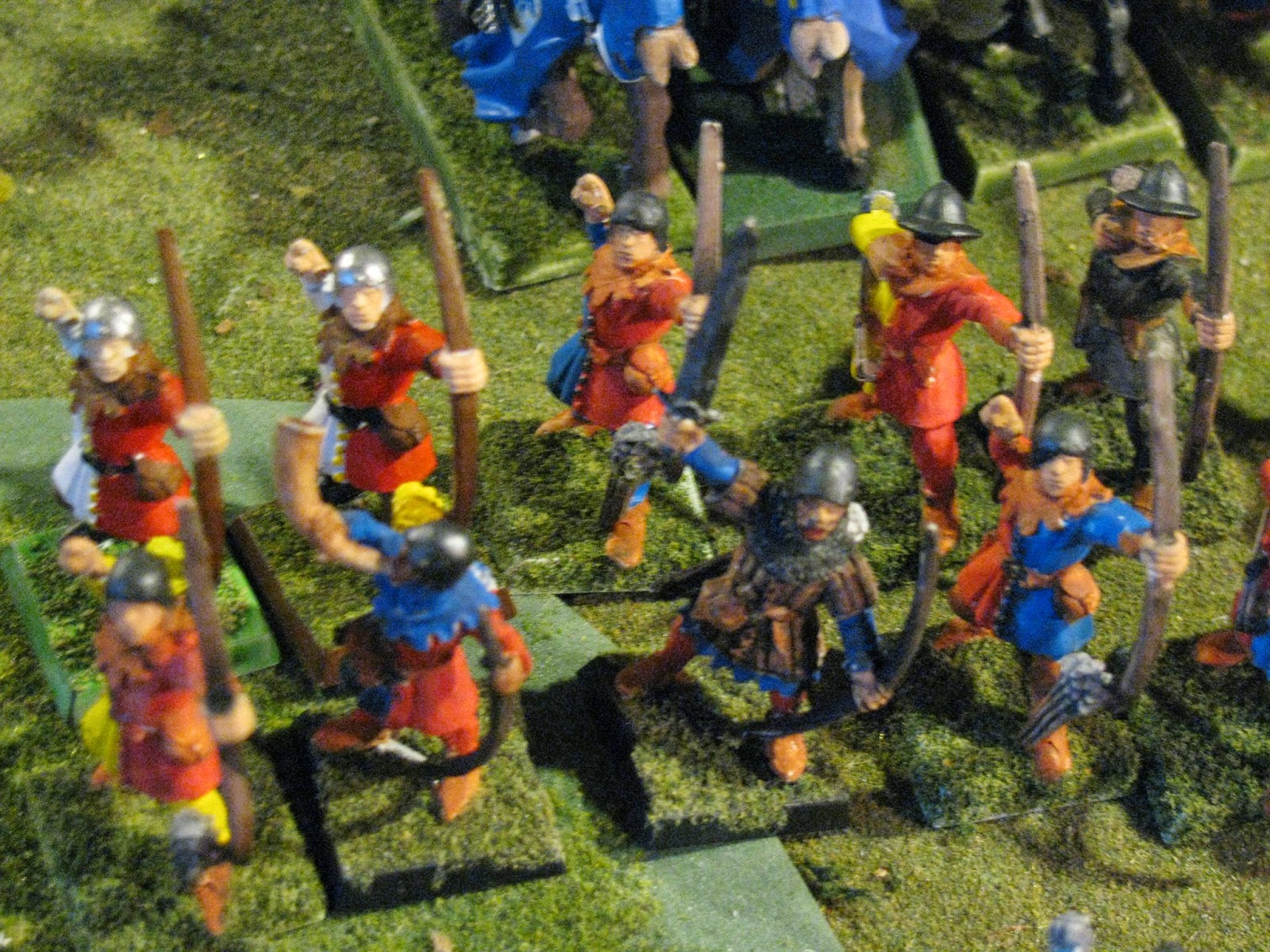 Of course, the bowmen are there to soften up the foe, and provide feet on the ground.

There are four units of bowmen, one of which can skirmish. There is also an unhappy group who flunked archery and are armed with spears, but they are expected only to hold ground.

The army is heavily dependent on its heroic leaders and the locally produced wizards.

The General, of course wields a magic sword....it must be magic to be used two handed on a horse without dire consequences to mobility. 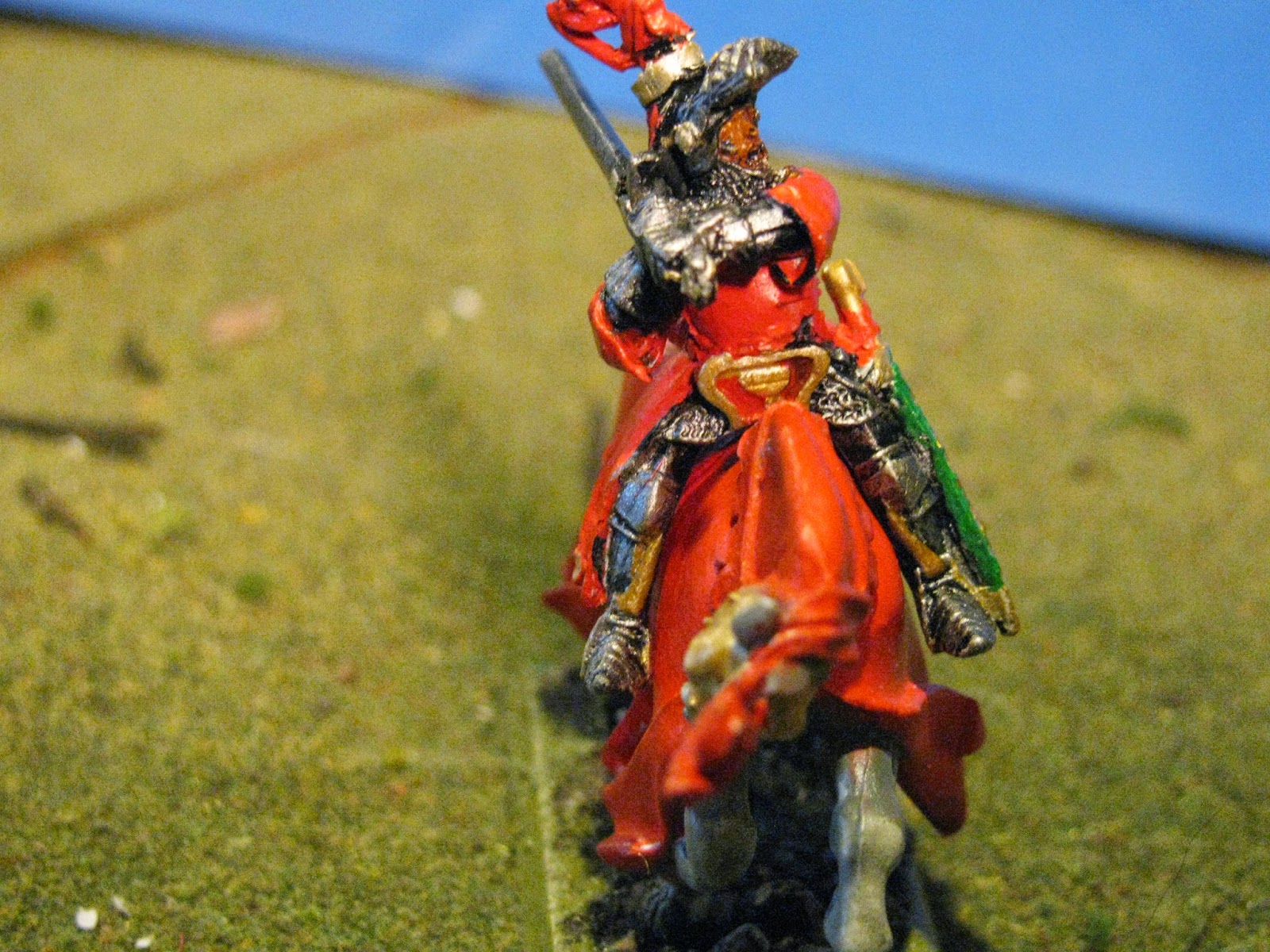 The battle standard of the Realm is carried by another heroic figure. 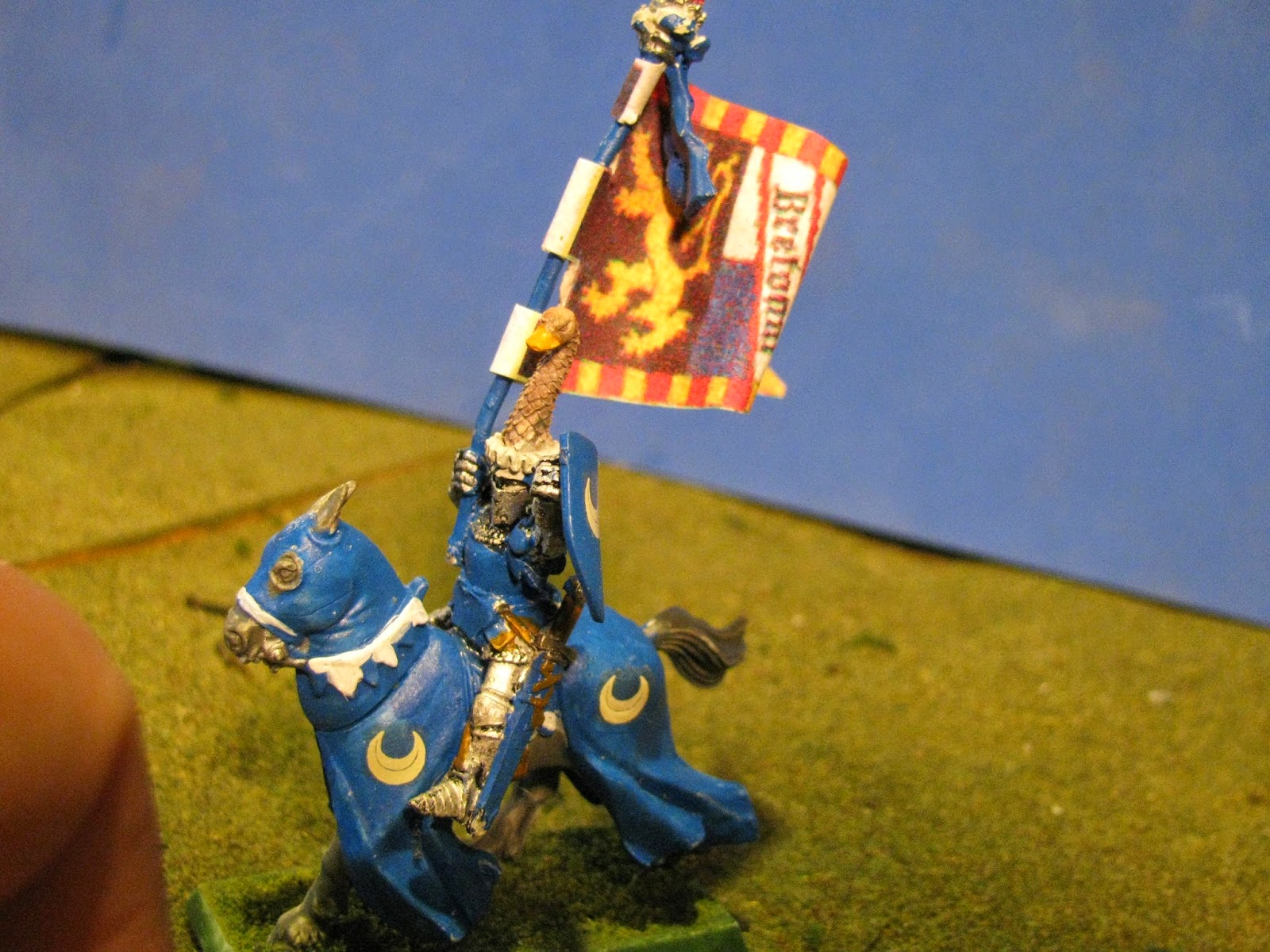 The magical backstopping is present in the presence of the Lady of the Lake.  Mounted on a unicorn, she can wilt even the most dangerous of foes with only a glance.  I am working out special spells for her, more in keeping with her role as Keeper of Nature.  One of the rules includes turning your opponent into a frog. See below.  I am glad to get this figure out for a game, the first in probably eight years.  Good thing lead does not go bad. 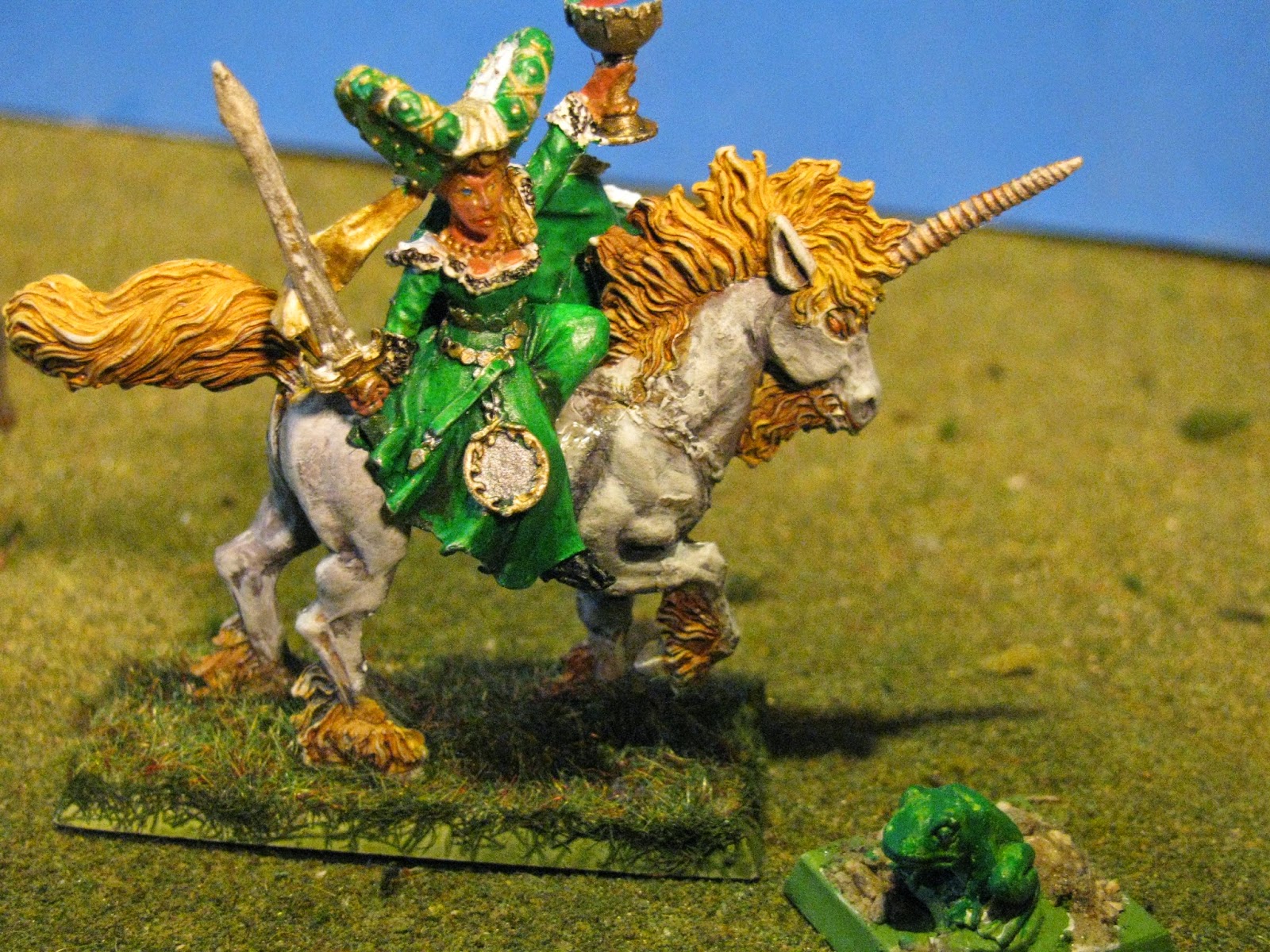 Probably not the Lady you  get upset on the wrong day.

The final entry in to the lists is 'The Greenwood Knight'  which is a single heroic figure who is primarily a defense of an arboreal area of the battlefield. I am working on the rules for the figure, as the original qualities of the hero don't translate easily from one rules set to another.  But it's just too cool a mini to pass up putting on the table. 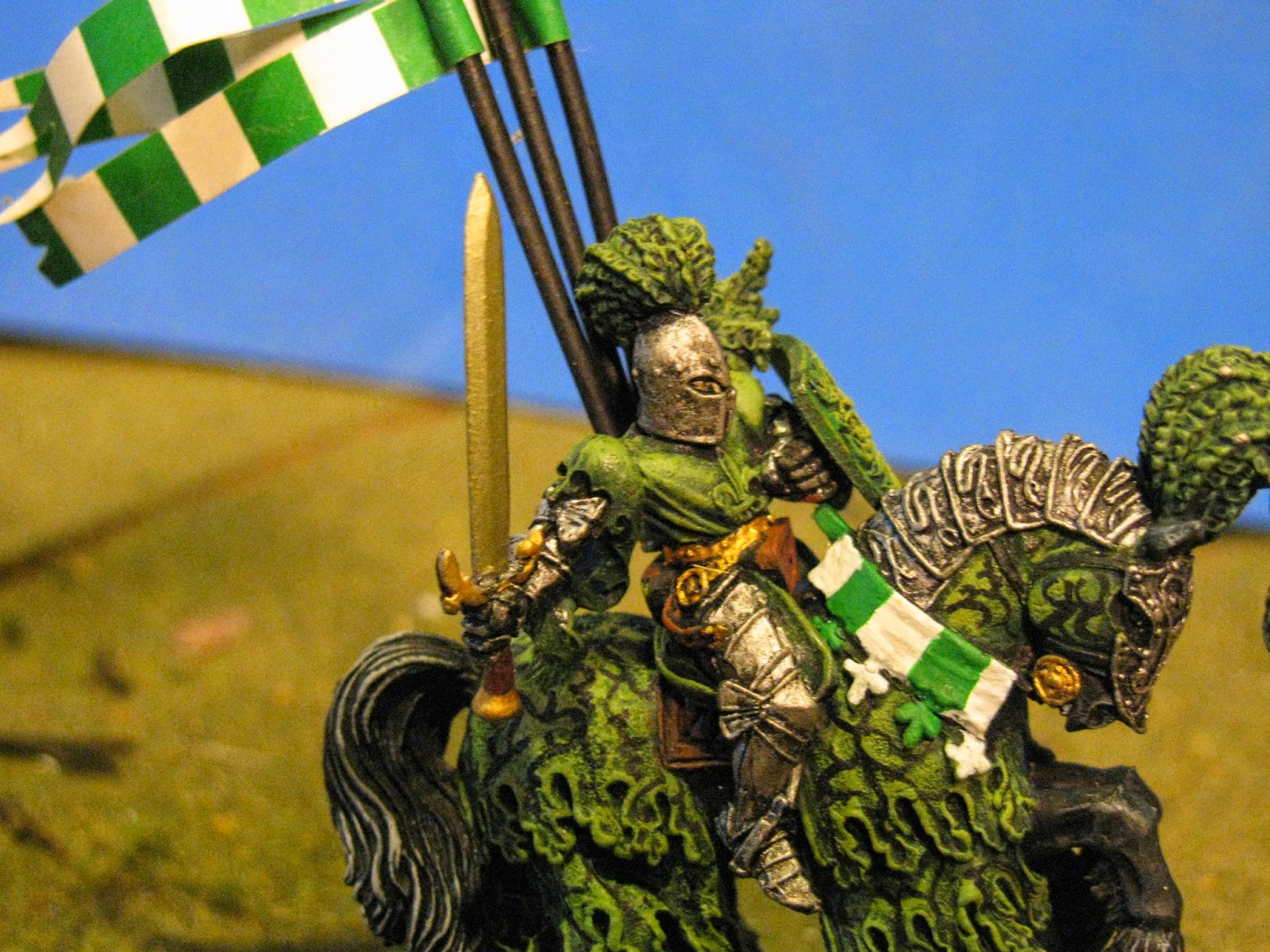 Oh, yes, there is a unit of 'Squires,' a sort of hobilar style unit, but they are not yet painted...as the opening paragraph says, no project ever truly dies!  Mounted on horses, armed with spears, they will provide some coverage when the knights are out thrashing all and sundry. As I get the Squires finished, I'll put up a photo.

So there you have it, a small but powerful force to happily waste a couple of hours with next weekend when I will be avoiding yard work!