Hostile Realms AAR the battle of the Cursed Helm

Yeah, just when I thought it was safe to play ancients. I brought my old figures out for a lark.  I 'shoulda' read the rules more closely.

The army I used was basically an 'Army of the Realmn'  list which I set out here:

My opponent, Jakob, presented a very nicely painted GW Ogre army modeled on the Dwarf list, of all things!  Jakob had a lot of heroes with his assault units and the heroes were 'high-strength' as befitted their combat role. 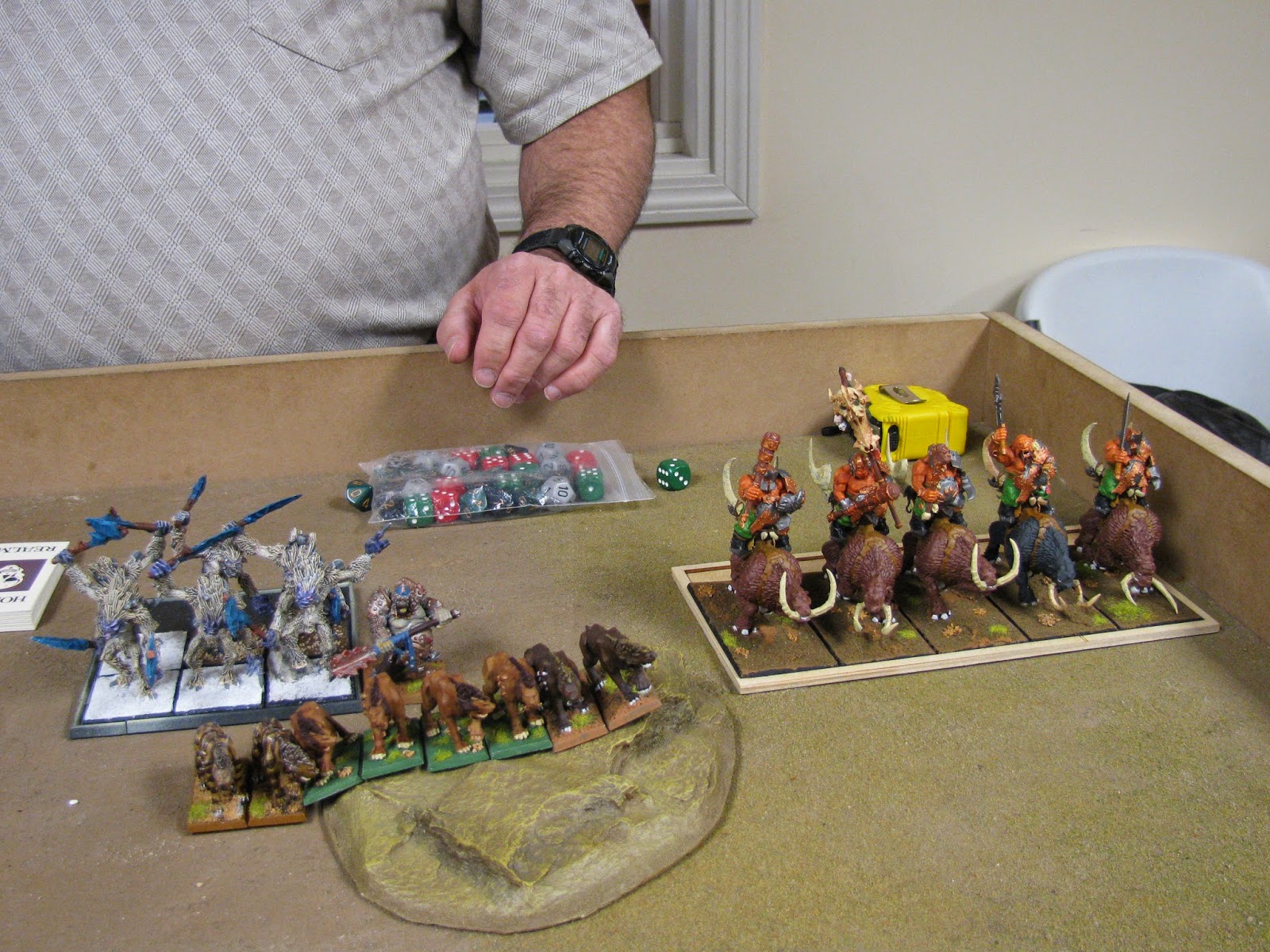 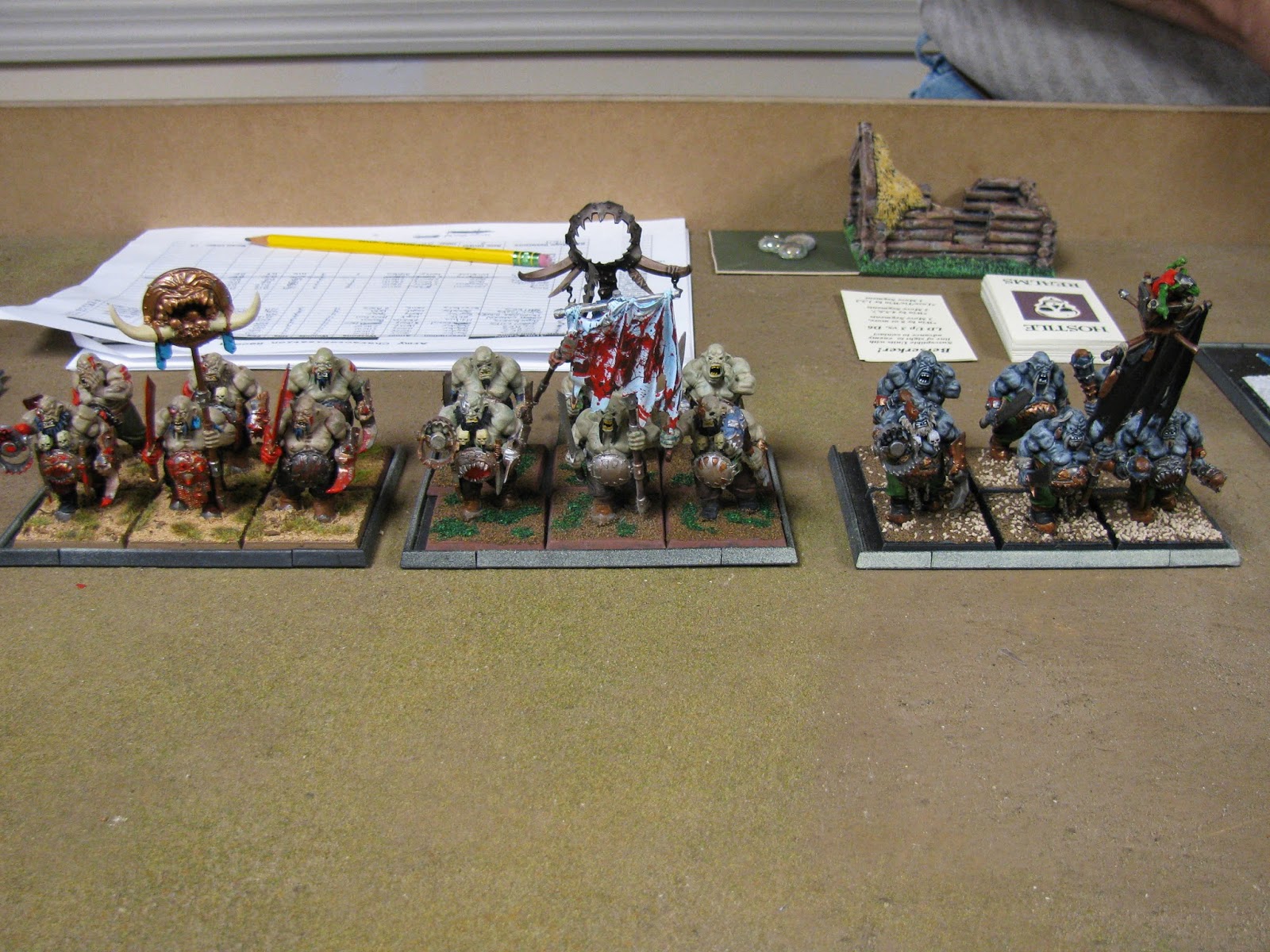 The other units were simply... really big dudes. 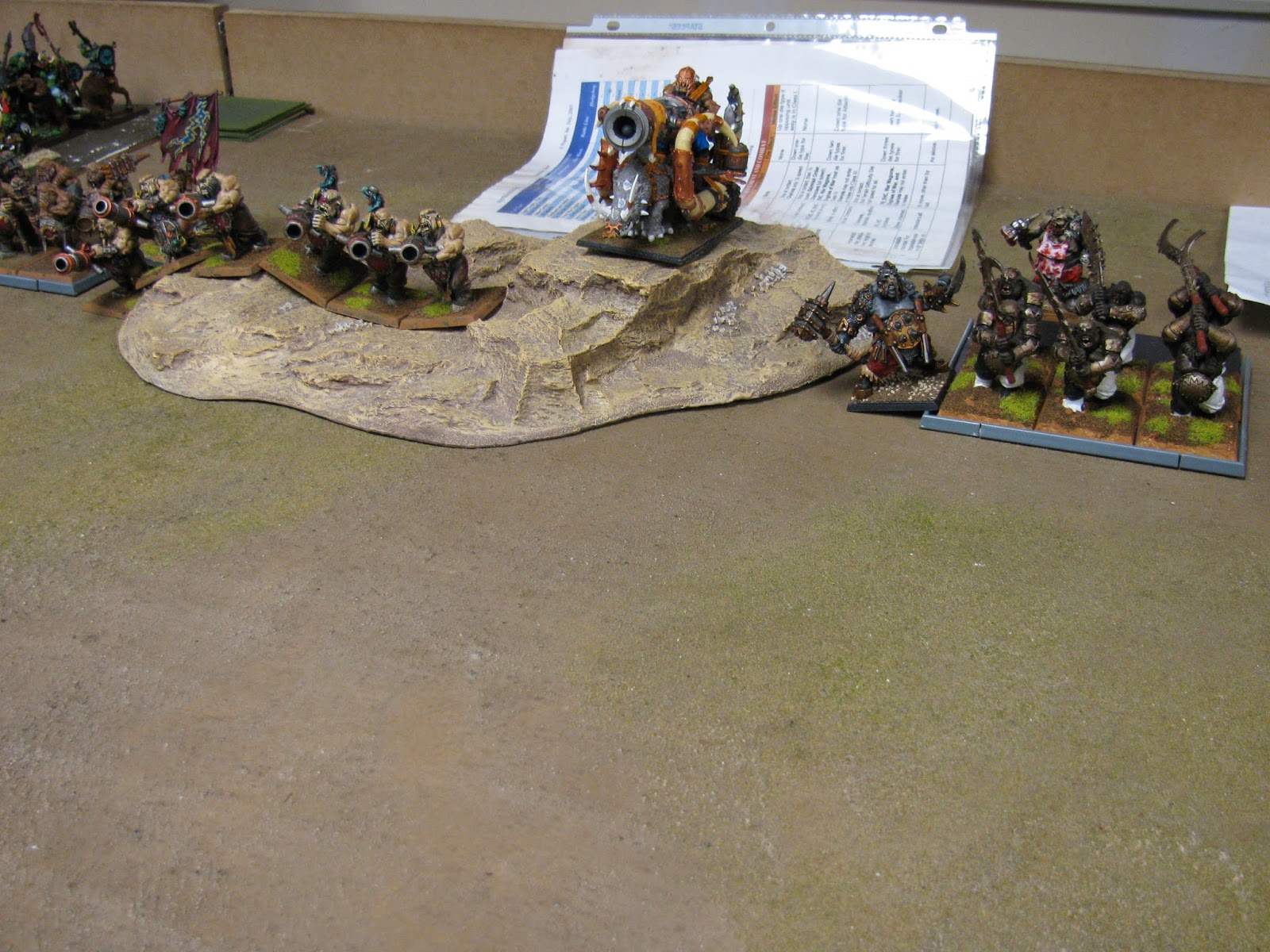 Even the Ogre artillery was extra intimidating.

I made the mistake of leaving all my leaders unattached early in the game. And misreading the EHC take not two but three hits.  This caused my cavalry units to vaporize even faster than my poor dice rolling should have allowed. And the magic users were not 'effective' as no manna cards came up, which it turns out I needed them for my clever, game turning spell.

And I kept rolling 1's and 2's for combats.  I did tie one melee, so that's something.

Best part of the game was Jakob, who was good enough to thrash me and better not to gloat as he did the deed.   So to the victor go the combat photos.

At the other end of the table, Greg and Peter C. were still going at it hammer and tongs...where Jakob and I had brought pretty elite armies, this goblin/orc vs northern barbarian slugfest brought to mind traffic on I-84 !  The barbarians were quite successful at first, but ran out of steam and were starting to get pushed back when I left.   Greg always does well when he 'goes green.' 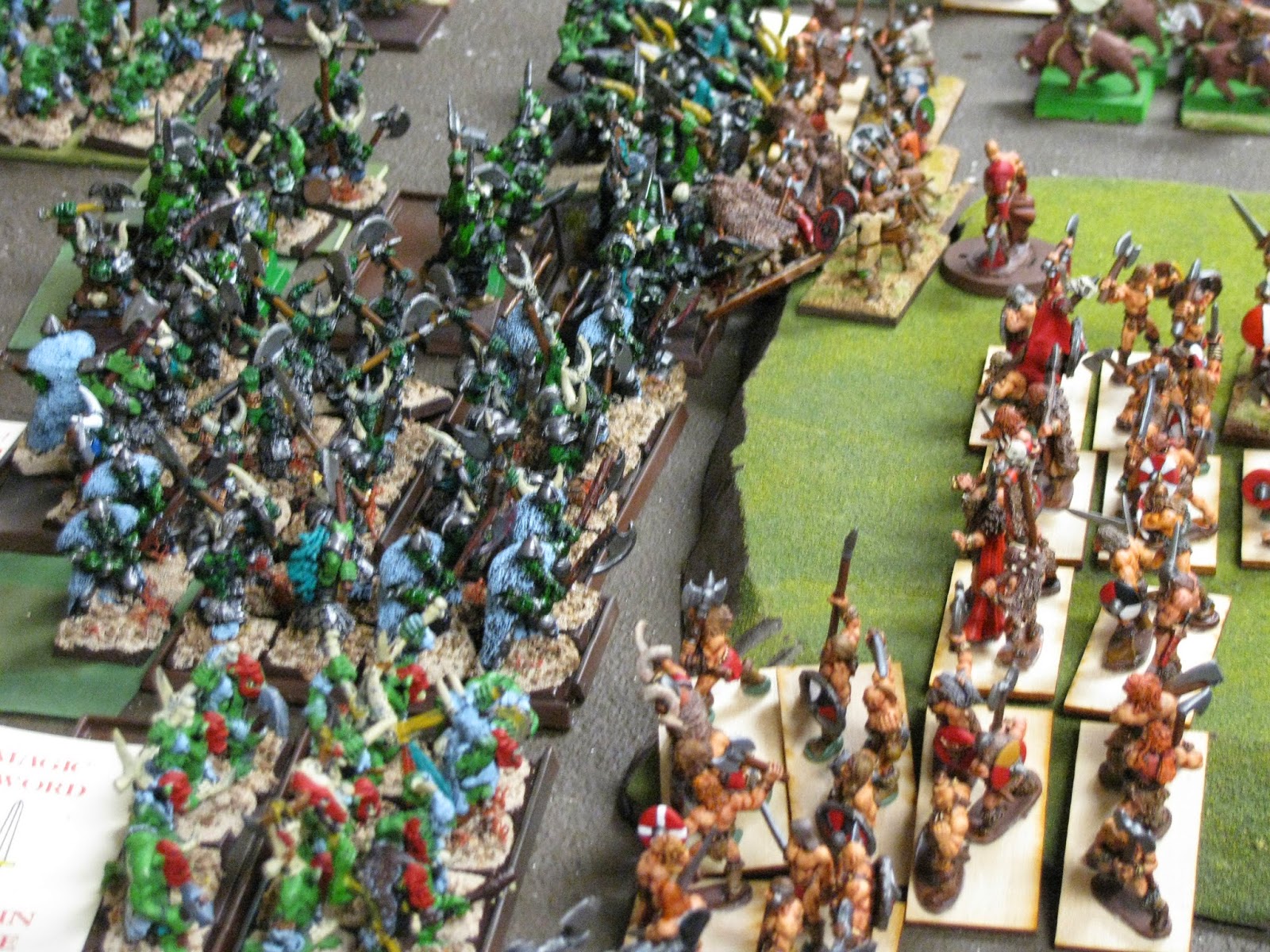 Even the mighty tusker did not turn the tide against the green horde!  So, there you have it, probably the most 'fantasy battle'  I'll play for a couple of years. 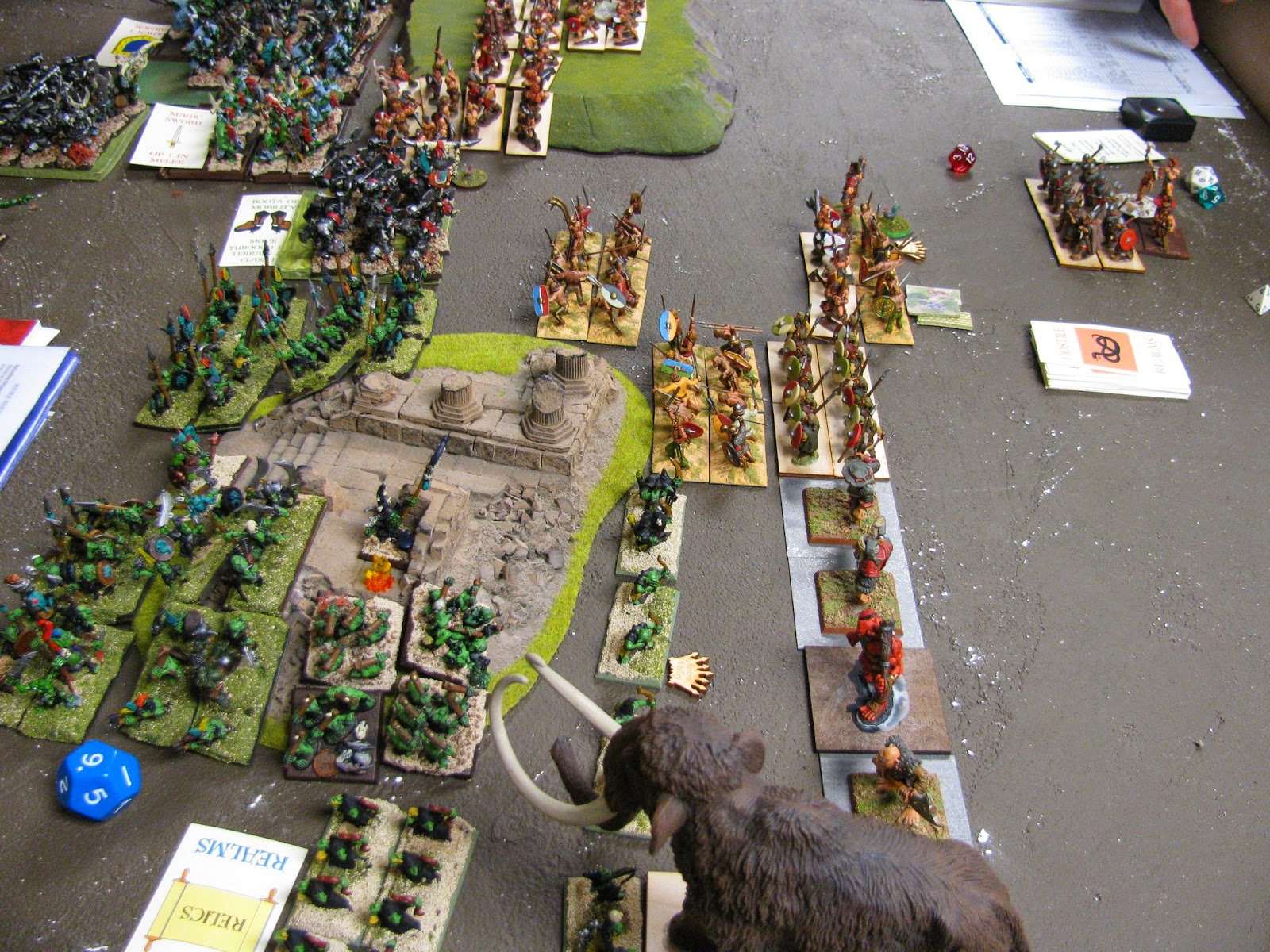