End of a project ( yeah, right) Bunswicker Uhlans of 1815

Back at Historicon 2000 or 2001 I was looking at the new Perry miniature releases at the  Age of Glory Booth.  One peek into the Jager command pack convinced me I needed to collect and paint the army.  Well, before websites with shopping carts were common for small companies and in between a lot of other projects, the Brunswickers slowly took shape.  For some reason, I did the cavalry last, and the Uhlans were the icing on the cake.   It was worth the wait, and they will see action this week in our imaginary campaign set in the same timeframe as the Napoleonic era. 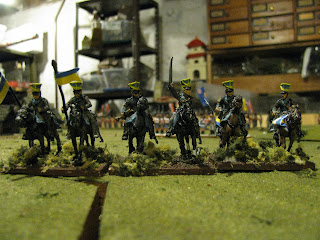 The poses are very animated, I love the fact the lancers are either at slope or held ready down for the ranks of the Uhlans.  It is actually one of the more colorful units in the Brunswick army in 1815, most units are dressed in black uniforms with only collar and cuffs in a facing color.  I created the pennons in 'Paint" which was a matter of two rectangles, one blue, one yellow.  The bases are from Litko, 2X2 inch squares, very neatly made. I have made my own bases for years out of various materials, but I think I'll reorder from them when this batch I have now empties out. 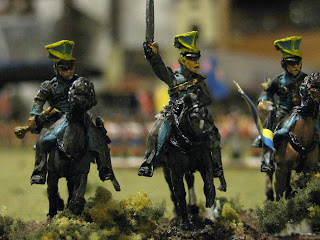 Perhaps there will be some 'action' shots later this week, although you know how fussy new units are about performing!

Okay, bending to convention I will list what I hope to get painted, assembled, put together.

I hear people complain of having a lead mountain. Sounds like a personal problem to me.  Paint the stuff, get rid of it or (shudder) play with it primed.

Personally, there are about 800 figures in 28 mm in the basement here as well as a couple hundred 20mm and 15mm figure. I'll get to them, hopefully before the cataracts get too thick to see.  No pledges of not getting more or getting a certain amount done by some arbitrary date.  That way lies madness.

I did just finish my first ever kilted Highland unit of the Napoleonic era. 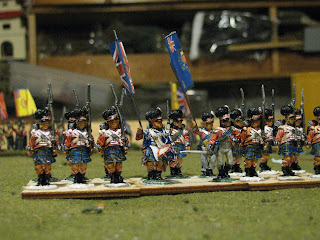 Some very nice Perry figures were subjected to my halting attempts at dicing on socks and bonnet bands, and a very basic government pattern tartan.  I am satisfied with the results.  The unit is 18 strong, a theme I am using for the units in the Quatre Bras project. So far, the 95th, the 42nd, and six line battalions are ready -or will be after a small matter of basing. 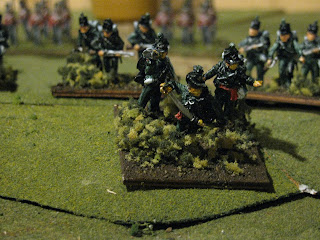 The Nassau, Dutch Belgian and Brunswickers stand ready,  veterans of one to a dozen battles on the table top. The French troops I look my several good friends, Roger and Greg and Peter to supply.

I am working out a table for the Quatre Bras scenario based on a map in the Hofschreder book on Ligny and Q-B.  In the ''Les Grognard " (PK) game scale of an inch equals 25 yards, it looks like the 10 foot by 5 foot table will cover the middle of the day area.  More on that later.

We are just about to start turn 5 of our imagination style campaign, set more nearly in 1800 than the 18th century as most imagination states are located.  The redcoats will represent some of the troops from the Grand Isle, a prosperous province of Ratlandia. The country of Ratlandia has troops suspiciously looking like Swedish, Brunswick, Russian and now British.  What can I say, after a couple hundred troops, my attention wanders.  Also, I have found that three hundred castings seems to be pretty near the limit in a game for a single player to use, especially if the game is to last for a reasonable (two to three hours) amount of time.

So I will expect to get some interesting (not balanced) scenarios from the movement orders of our erstwhile rulers, but that is next week or later.

Other games I hope to report here include some forge of battle scifi skirmish, some 'pulp era' skirmishes, some 17th Century Eastern Europe battles using Poles, Cossacks and Ottoman forces.  There are some very nice Turkish figures in the basement waiting patiently for me to stop this Napoleonic nonsense.  There could be some Colonial era skirmishes, some VSF games (yes, Barry).

There may  even be some WW2 action. Never can tell.  Rerun season has already started and March Madness is seven weeks away. So there is some time to paint, and play.