The task force was two days out from Zion 12. The relief would come after the hand off to the system defense forces. Commodore Wizor watched the monitors showing the freighter, carrier and escorts. Well, no pirates, no random space phenomena, no breakdowns. 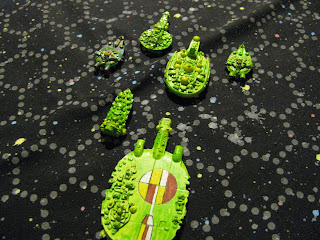 The scream of the threat sensor klaxon startled many on the bridge but simply focused the commodore and Captain Zwifell. As the seconds ticked off, the sensor technicians refined the threat assessment. Three Carnivore cruisers and three destroyers were performing the traditional Carnivorean 'bum's rush'
maneuver, a straight ahead high speed attempt to close with the Terran forces.

Launching fighters, escorts to front! Standard drill to slow the attacker, but one carrier against three cruisers looked bad. The few guns on the freighter were not much comfort, but would probably keep the first wave of those thrice damned cat missiles. Or so the Commodore hoped.

There's the background of our game this week, a lead in to the newest ships painted, the Attack Carrier, Freighter and Armored Pursuit Ship.

Here is the freighter, I am going to add some detail, probably accent the parts that appear to be derricks set flush to the deck in travel mode. Don't really know why you'd want to be trim in vacuum, but there they are, flat to the deck. 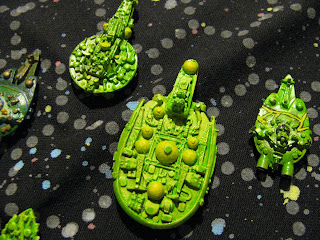 More interesting was the Armored Pursuit ship. I think the name serves this class of craft poorly, the short ranged weaponry say escort, not attack. The aft section has a definite bank of radar or other sensors, so 'eyes' seemed the best scheme there. 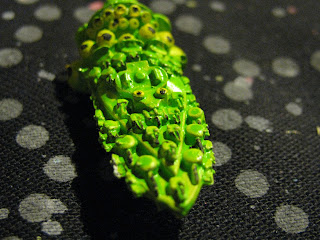 The destroyers were covered before, which leads us to the Attack Carrier. I 'cheated' and used a drafting pen to separate the colors on the landing areas. Looked pretty good to me, I offer it to you to peruse. 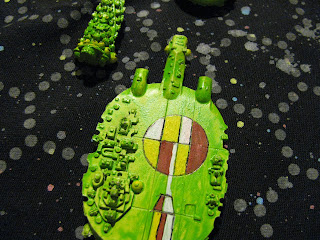 More later, we'll play Wednesday and hopefully I'll get a chance to do an after action report for you.
Posted by pancerni at 8:37 PM 2 comments:


Having decided on a color scheme stolen from nature's tree frogs for the Aquarians, I present to you some of the smaller ships of the fleet. I noticed today that the Aquarians are similarly shown on the GK website page at Monday Knight Productions.  What can I say, great minds thinking similarly, I guess. 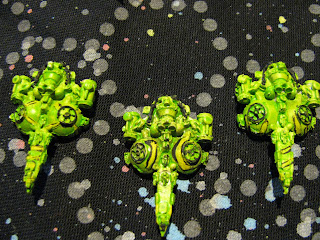 First up are the Star Bombers, these bad boys have  been responsible for at least three cruisers in our 'learning the ropes' games.  I now know if you see them, kill'em!  You  can see the yellow stripes on the fuselages.  The star bomber luckily cannot take a lot of damage, so get them quickly and they are no longer a threat. 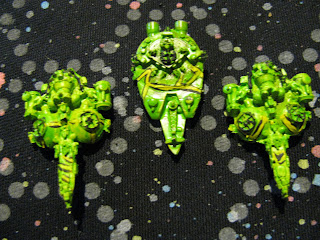 The second photo shows the first of the Destroyers using the tree frog design.  Each ship has a different layout and number of lines, which are yellow bordered black on the light green frogs.   The destroyers can damage Star Bombers, but must 'gang up' to completely neutralize the Star Bombers.

As  I decide on the schemes for the cruiser and attack carrier, I'll show them.  We are parallel playing some learning games and putting fleets together from scratch.  So far we enjoy the 'drift ' rule the interplay between the fighters, missile and ships, as well as the special weapons of the various races.

I have some more ships, a battle cruiser and a destroyer leader on order, oh.... and some fighters of various races.
Posted by pancerni at 6:33 PM 4 comments:

Email ThisBlogThis!Share to TwitterShare to FacebookShare to Pinterest
Labels: Aquarians

Back to Quatre Bras

Although I have not posted on the QB painting for awhile I have gotten a few figures done.  I have some Victrix line in the mill but can also share these- three generals and a battery of Royal Artillery.

First, Pack, Kempf, and Halkett, some more of the Perry figures from the British Napoleonics line. 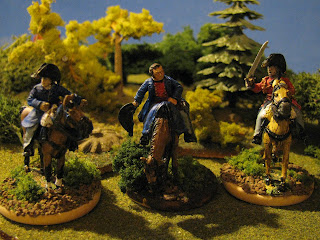 These fellows will officer three of the four British/Hanoverian brigades on the table.  Well, after the last two line and two Highland battalions are painted.

And the RA battery, some in shirtsleeve order.  Again, from the Perrys' line. 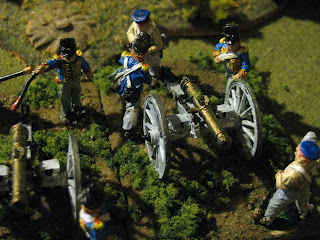 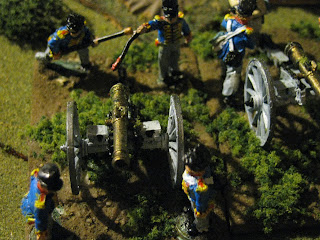 I'll soon add the Hanoverian battery in the basement to finish off the batteries in Picton's Division.  The photos are not the best, the crews want into a game, not pose, I surmise.

Paint color, that is!  I have decided to make the fleet dependent on a base coat and wash 'technology' because quite frankly there is no way I can do any justice to all the tiny detail on these ships.

In addition, after a couple of games, which admittedly had crude tactics used,  I can see an upper limit of ten or so ships in a scenario for the game length I like and have the availability to play.   So with that in mind, I an create a scheme for at least three fleet groups.

The first group is heavy on Star Bombers and star destroyer size hulls, with a cruiser as the big gun or flotilla leader.  So in this manner, I will have 5 star bombers in the 'green with stripes' pattern.  The pattern is loosely based on tree frog coloration, with the stripes serving as a method to identify individual ships. These are supposedly mostly amphibian based life forms, after all.

The basic color will be the hull color for the larger ships, but an oddly shared trait is the turtle head prow which calls out for a stylized face. Maybe, if I can get one I am pleased with the result. 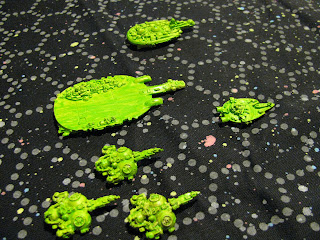 Here is the base coat, the Pelikan Plaka color is called  Hellgrun (light green) on a few of the ships. There are three star bombers at the bottom, the large ship is a fighter carrier, with a destroyer to the right and a cruiser at top of the group.