Well, second and third games of the Napoleonic skirmish (1 man per casting) have proven most enlightening. I suck at this game.

Right before our trip to Yellowstone Nat'l park, Greg, Roger and I had a smallish game using about 300-350 points.  All infantry, Brunswick troops against the French. 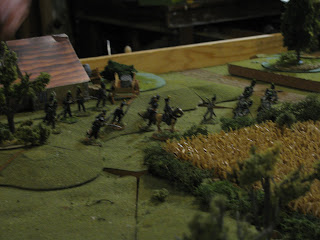 A fuzzy shot of part of the Bruswick Avante Garde jaegers backed up by muskets of the same unit. 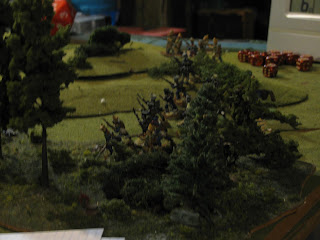 Our enemies the French, or  a part of the force.  Hmmm, looks like a lot. 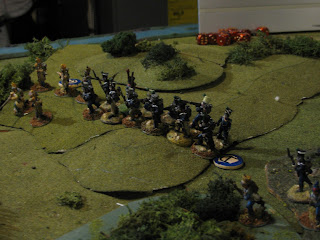 Egads, more of them! A unit of line troops, in line formation, no less. 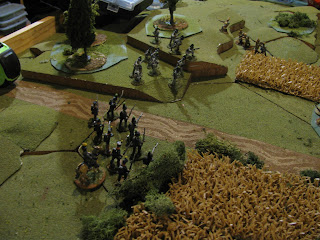 The Avante Garde spreads out as the drill book calls for. 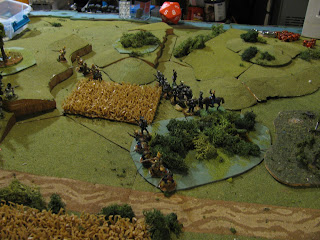 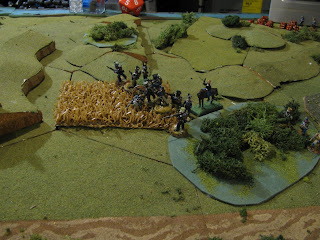 The shifty enemy shifts to the right. 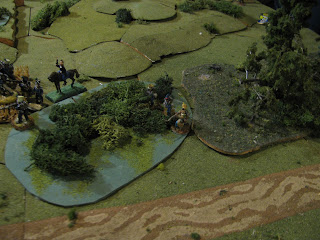 Egads, even more of the snail eaters! 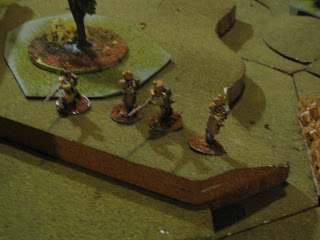 Slowly the French advance and start to take casualties. 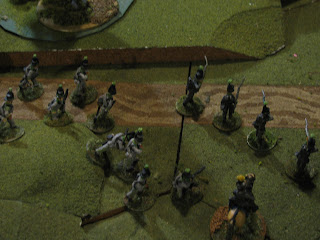 Somehow, my clever plan is dismantled by me placing units one in front of the other, robbing the Jaeger of targets.  This hurts as the rifles covered from firing are longer ranged and easier to hit with than the muskets! 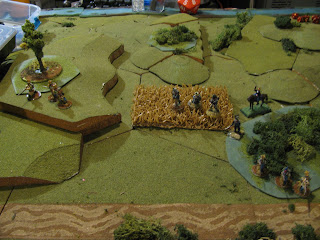 The clever plan of the French unfolds, dastardly they are sending in all their units so that they can fire! 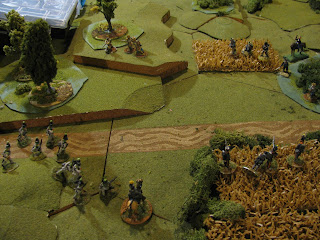 Trading shots as I finally get units sorted out. Note that I have placed the musket company in the corn. 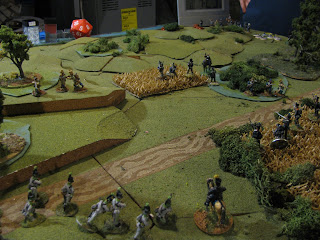 Just before the end, the French charge the cornfield. We fight our first melee in the two games played,
Greg takes the win and the game.

Shifting forward to yesterday, my grand-daughters, aged nine and twelve handed me a another shellacking. They played the Brunswickers, I the French.  We used six five man units and a CO per side, everyone counted as musket armed. The table was as indicated in the photos above.  The object was to get the majority of five wagons that were on the central road off the player baseline.  We played hard and long. I forgot the camera but must report getting two wagons to their three; losing three units to routing to their one.

Grandpa not only graciously conceded, but bought lunch. The ladies feasted on grinders and I had Philly cheese steak in my sandwich, so the day seemed a little brighter.

I do like the rules, I can see using them quite a bit for the 'scout and shoot' type games I like in this game scale. Oh, yeah....grand-daughter approved as well.
Posted by pancerni at 4:25 PM 2 comments: