Let's do a space scenario!  That was the choice made a couple weeks ago for the 'battle of the week.'  So dutifully setting out the star map cloth, counters and a small Aquarian fleet I awaited Roger's Carnivores to make an appearance.

We have been playing Monday Knights rules "Galactic Knights" for about a year, and the most recent expansion came out, the fourth race in the back story.  These are the Aquarians, subject of several painting posts but not actually played as their own style of fighting.  Naturally I had picked the fleet without the rules availability to do first, but that was now rectified!

Armed with the anti-gunnery missiles and 'paint peeling' technology of the space faring fishy fleet, I set out two cruisers, a destroyer and a patrol class ship against a squadron of Carnivores.  The Carnivores had one less ship, but the match was pretty equal in 'points' as they are rated by the ship templates supplied by the rules.

One furry destroyer and two Carnivore  cruisers (is there an overload of alliteration in this post?)  approached the Aquarian task force methodically.  The commander, Roger the Fang, had met Federation ships and triumphed easily, he felt sure to do the same with these minnows. 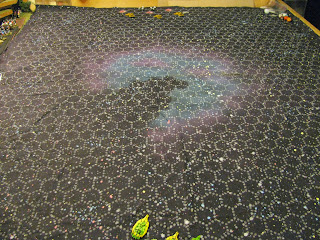 The fearless fish approach at bottom of the photo, most still steathily entering from beyond sensor range. The hairy, toothed Carnivores are 'way up yonder' both fleets well out of range...but that can change quickly in this game.  The Aquarians are from the "Screamin' Yellow Zonkers' squadron which has been patrolling the sector for some time now. 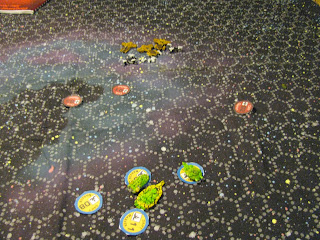 The situation after two turns, one of which has some long range sniping.  The Aquarians are equipped with missiles that degrade the ability of the enemy to hit target ships.  A clever way to simulate cloaking through sensor deprivation.  The Carnivore fleet at this point is actually coming out behind in gunnery, despite a larger number of guns bearing.  You can see the problem causing missiles near the Carnivore ships.  The counters on the map represent 'drift' a clever use of physics to remind the players this is not a surface ship warfare game. Go too fast, you'll fly right by an enemy and have to turn around! 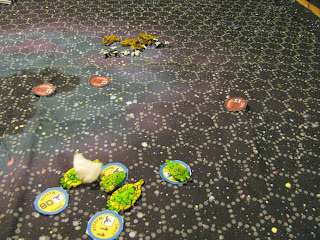 The Aquarian fleet moves into mid range, stripping off most of the armor of one of the Carnivore cruiser's.  Then disaster strikes.  A series of hits from the combined firepower of the three enemy ships reaches deep into the Aquarian leftmost cruiser, exposing a shocking Achilles' heel design flaw.  A rack of short range plasma torpedoes is hit, destroying the ships and its crew.  You can see the expanding plasma cloud in the photo. 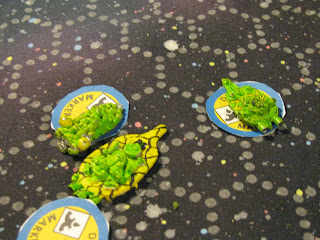 The remnants of the Aquarian fleet, mindful that its remaining cruiser is of the same ship class, hits their infinity drives and live to report the contact.  The Carnivore ships are all safe, although one of the cruisers will be in repair for some time to come. Good bye, Commander Pike and company!

The game went fast and once the decision to come into middle range was made (as the Aquarian, I thought to get the cruiser that was almost completely out of starboard armor severely damaged) the action became furious.  The Aquarian missiles caused problems for the Carnivore ships, the Carnivore anti shield missiles caused the shields on the one cruiser to go down, and the Aquarian armor is thin in most cases.

In all, as the Aquarian, my tactics were too hasty to close, another turn or two at long range may have caused enough gunnery damage to destroy the Carnivore cruiser, or at least draw the gunnery numbers into my favor. I am going to rework the standard ship design in both the cruiser and battlecruiser to replace the deathtrap plasma torpedoes with either a different weapon, or even just a cargo bay!

The game was better balanced than previous outings where when using the Federation ships I have yet to fall into tactics to defeat the heavy armor and large numbers of gunnery factors of the Carnivore ships.  Go scaly space farers!
Posted by pancerni at 11:26 AM 3 comments:

Yep, my last brigade for the allied side of the battle of  Quatre Bras.  The Luneberg battalion completes the brigade.  I will have Col. Best appear in the uniform of a British Light Infantry colonel soon.

The battalion was yet another of the Landwehr battalions that sported facings of blue.  I used Opaque blue for the facings, Cardinal Red for the coats, tube acrylics for the yellow (sashes) and white (belts).  I tried something a little different, I mixed up some watered down brown ink with the future wax concoction for a sort of 'dip' effect, but applied it only to the coat and sashes.

I'll let you judge whether it was effective!

A photo of the Luneberg battalion...honest, it's not the Munden Battalion from last week! 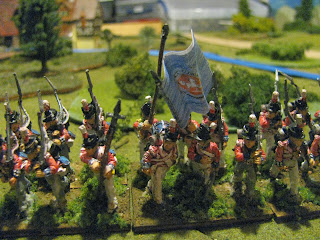 A photo of the entire brigade. Best and Kielmansegge, the brigade commanders for the Hanoverians, are 'in process'  and should be ready for table appearance about the time I have a scenario set up. 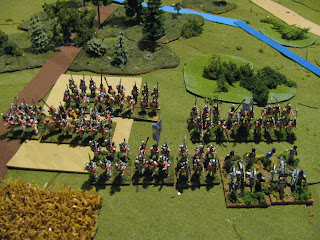 At least for the time being, I am providing some conjectural colors for the Landwehr flags.  Photo copied B&W from an old Osprey book on the Hanoverians, and hand colored with pencil shade by yours truly.  Two battalions now have at least one color!

With the main Allied forces at Quatre Bras now completed, I can vary my projects a little more (big deal....the next units in my queue are RA and RHA batteries for the 1815 campaign...not much branching out there) as far as army and period.

Also, I'm going to cover my adventures in 'space' and WW2 a bit more often.  But there will be posts on Quatre Bras as I try to nail down the scenario for the table top.  'Til next post.
Posted by pancerni at 10:45 PM 2 comments:

Well, coming to the end of a project is always interesting.  The painting has really slowed this last six weeks, as have the blog entries.  Only three games in the last two months, all WW2 Eastern front in 20mm, and none of these in the last two weeks.

Finally got back some painting mojo, so here is one of the last  two Hanoverian Landwehr battalions in Best's Brigade , the  Munden (there should be an umlaut over the 'u' in Munden, come to think about it, probably in Luneberg as well!)

Both units had blue facings, and I opted for the drum bodies to be in the facing color. The units saw a lot of action at Quatre Bras, fighting near the East-West road at first and later advancing toward the French in the mix with British and Brunswick units.

I cannot find anything on standards for the specific  Hanoverian Landwehr battalions, so I am contemplating putting out with cased colors for now.

And now the photo.  This time, all the Hanoverians in a group. 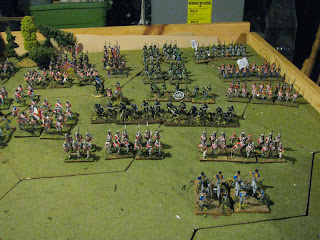 The militia are to the front.  Just behind the artillery.  Just the Luneberg Landwehr battalion to go, and Bet's Brigade will be done.