Greg H. came over and we set up an Anchor of Faith game set loosely in the TYW.  Here are some photos of Greg Hanson's TYW figures. Greg ran Swedish Brigades against the smaller Late Imperialist battalions I fielded.  Maybe next time I'll try Tercios! 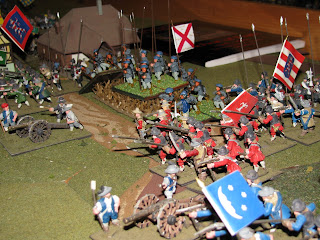 Greg's center infantry advances.  After setting up we happened to catch that Swedish Brigades counted as two units, so I was slightly outnumbered in infantry units, not that it mattered much in the game. 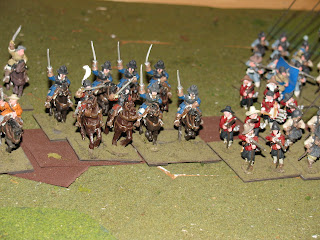 Greg's cavalry advance.
These were just as successful, teaming with his infantry to defeat my side's cavalry. The decentralized chip pools made for some very interesting gambits and helped reflect the difficulty coordinating an army in the period. 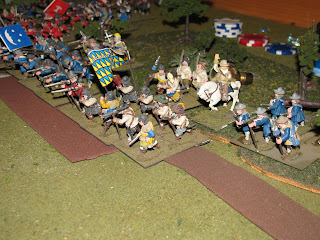 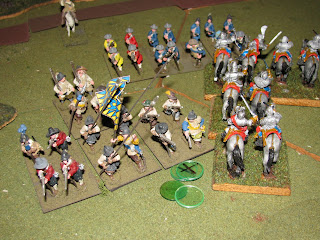 Greg even got an infantry attack in on some of my right flank cavalry.  Oh, the horror!
It was a lot of fun to get the pike and shot out, but I want a rematch!
I'll probably have to put up some shots of my Polish army to begin my psychological warfare campaign before I play again.
Posted by pancerni at 9:18 PM 2 comments:

As an old timer, I remember more sets of rules gone by the board, but every once in a while a new one that looks promising comes along.

The Forge of War yahoo group (at least for the next few days) has a set of skirmish rules linked to the 40k background.  The set is a cross between some of the Rogue Trader  and Necromunda.  Small groups of troops per player, scenario based games, mini campaigns as a basis of play.

Did I mention free download?   The only hitch is the yahoo group will be 'going dark' as the owner will be migrating to a new service soon.  So if you want to get a pretty good set of rules for very small level sci fi skirmish, give these a look!

Posted by pancerni at 9:42 PM No comments:

In  this project, I started with the Russian Dragoons after getting past the base/stain/wash  on all of the mounts.  The units would represent those from the 1812 campaign, from the  same cavalry division.  I just finished my second Dragoon regiment, the one with the turquoise facings,  and started blocking out colors on the Huzzar units and the cossacks as well.  When I am done, the Mariupol and Soum Hussars will complete the third brigade of the cavalry division.  The Cossacks will be part of the army's horde of said troops. 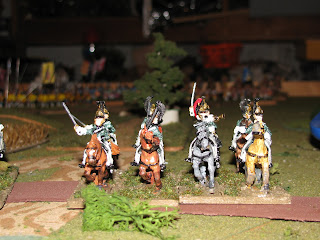 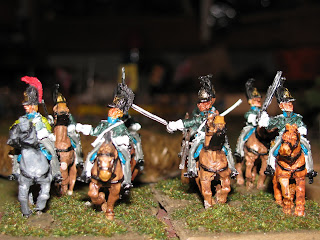 
'We' got a bit behind as the weekend has been preparing for, sitting through and cleaning up after the hurricane called Irene. I would guess Peter and Barry had it worse than here based on the storm's track. Now its Labor Day weekend, I hope to get a bit of work done on the hussar units.
Posted by pancerni at 9:10 PM 2 comments: