Well, after painting the Elfsborg Regiment, thought I could tie together a few ideas together.

When the silliness started, and how it morphed:

Back in the early '80's, I started a Swedish Napoleonic army because it is in my ethnic background and it would be unique locally.  Then Minifigs suspended 25mm production. So I painted up what units I had, and moved on.

Fast forward several decades, I was wrapping up my Quatre Bras Anglo-Dutch  and 'lo and behold' the Perry brothers started up a set of packs for the Swedes, so onto a new -old project.

The Swedes are an 'interesting' army to model, with only a few sources available for uniform info. Like, three major uniform changes from 1800 to 1813, with various regiments not changing for years, or maybe ever. Colonels had more leeway, if they wanted and paid for, light unit and musician differences from the rank and file.  I did the same, some regiments in grey coats, some in dark blue, some in light blue, one in white!

Did I mention they lost Finland to Russia partway through the Napoleonic period? And a good part of their army dissolved? In regards to that  I decided the 1813 campaign would be my focus, collecting towards that O.O.B.

The early, minifig component of the army was originally organized and painted in eight figure battalions (say what you want about the Empire series of rules, a 1:60 figure ratio was good for meglomaniacs!)

Switching to an 18 casting standard for battalions reduced most of my forces to single battalion strength, with some repainting to get from 16 to 18  figures.  Hmm, what to do? Well, buy a couple of orders of Perry packs and start painting.  Now the fun begins...what units to keep, which to start over?

Did I mention that most of the Army served under Bernadotte in the Army of the North in the Leipzig campaign, but that some units (some of the ones I painted) served with Walmoden in the Hamburg area?

Armed with an 1813 OOB, I found a way to stay sane tracking what to paint and what needs to be ordered next,  Really Useful Boxes to the rescue. Turns out, the Swedes were grouped into multi-regiment brigades, numbered 1 through 5, the first four with The Army of the North, the fifth with Walmoden's Corps.  A really useful  8 liter box can accommodate the figures in each brigade. 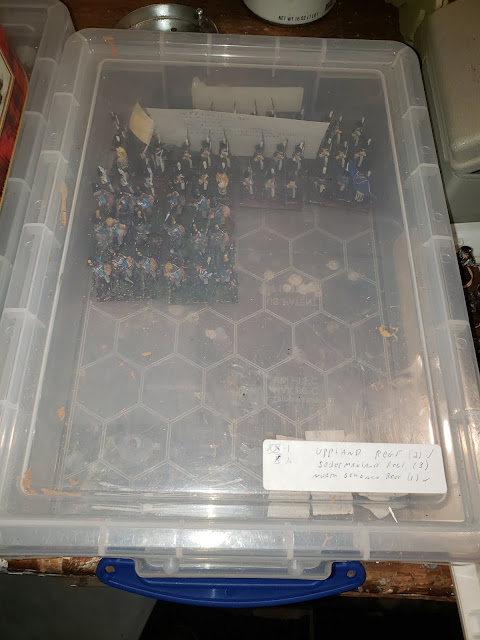 Ok, not impressive, yet. But note the clever use of pressure sensitive adhesive label to denote what units should be in the box. And index cards on how to paint the absent units as purchased. 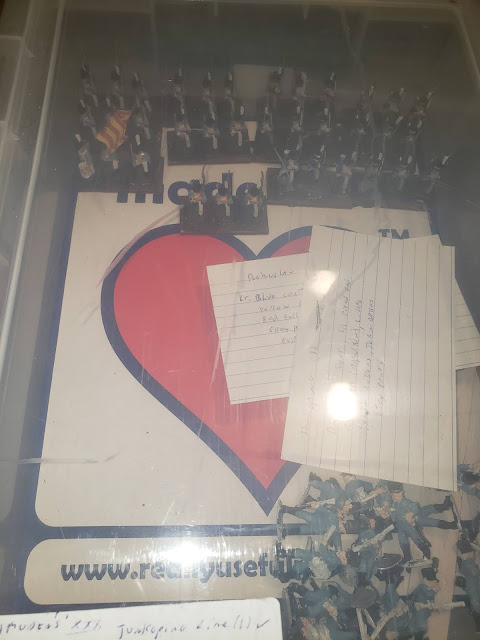 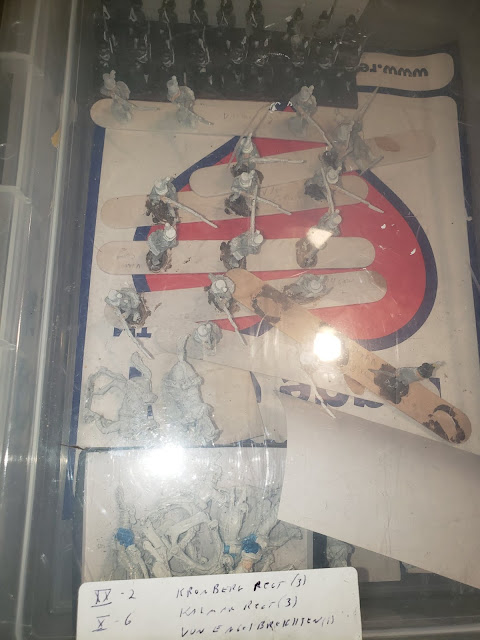 OK, a lot to paint here. 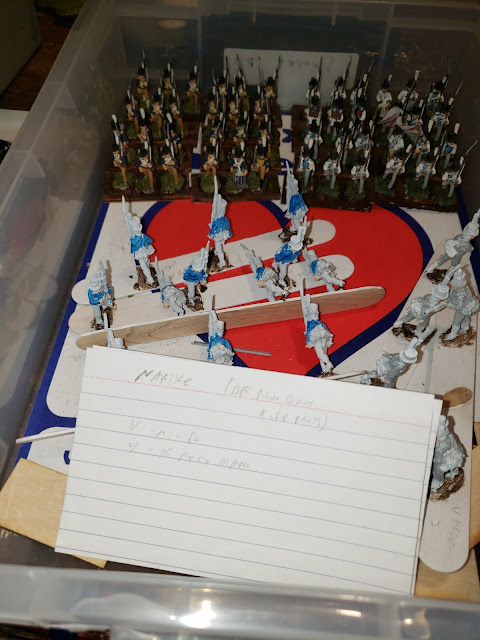 Next in line here- the Narike regt, 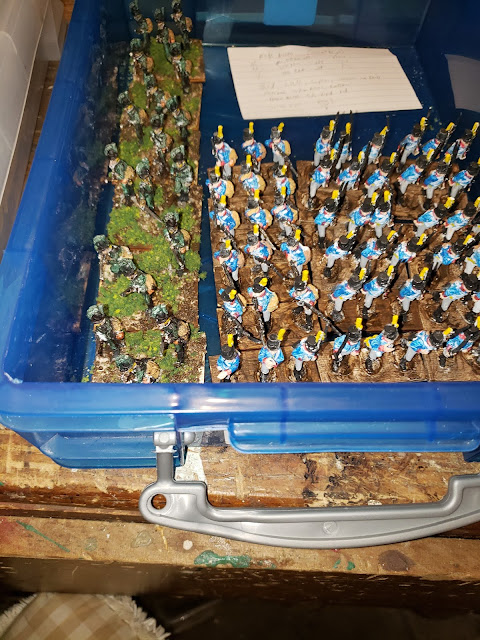 I will catch up the project at a later date.

What with a week at Cape Cod, power loss to the storm  in early August and a parade of contractors in to work on the only bathroom in the house, getting anything up on the blog has not happened.

But the natural light on the front porch has enticed me, and a few troops have been painted.

I got a big block of Swedes started, to include the 1813 version of the Elfsborg Regiment. I plan on a bigger article on the expansion of my Swedish Napoleonic army, the main project this year.

Anyway, lousy shot, but proof of paint. Figures are from the Perry brothers, line advancing, command advancing. All three battalions at 18 figures each. 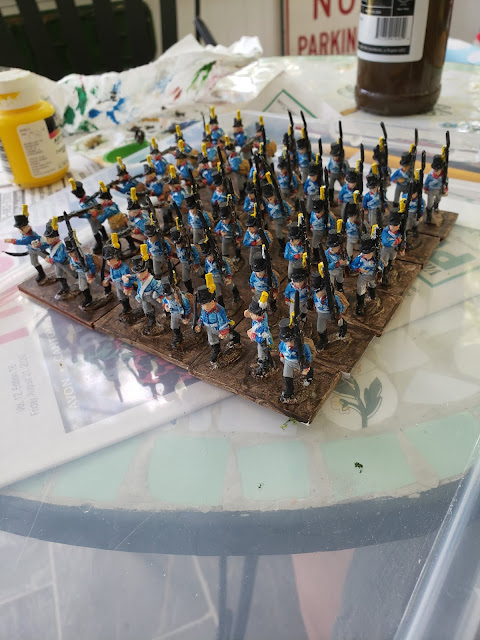 I went with Swedish Blue as the coat color. Red collar and cuffs, yellow turn backs and plumes.  I will add standards to the unit in the near future. Yes, and add flock to the bases.

Anyway, on to the Hanoverians.

From Front rank. Lovely mix in the firing pack, just what I wanted to supplement the line and light battalions of Best's and Kielmansegge's brigades and duty in my imagination campaign. 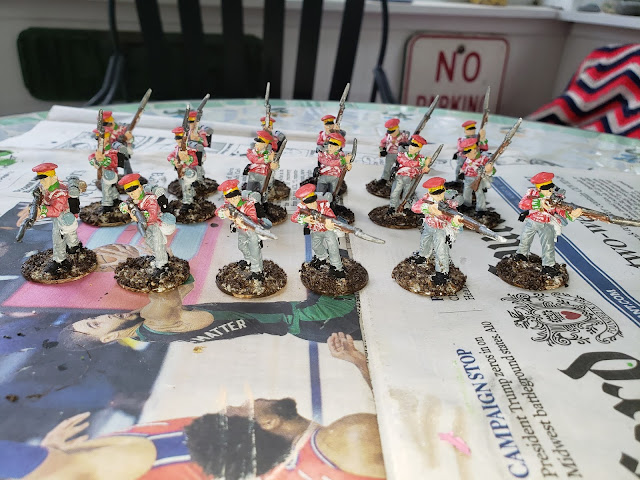 Lots of lace, but the relief of the sculpt was very helpful in the painting. I had done blue and yellow facings, thought I would have a unit in green facings. Got to hit the Hanoverian book to pick a unit!

Yes, they will get more flock as well.