Finally, photos as promised for over a week.  I don't apologize as you get two units rather than just the Highland unit. 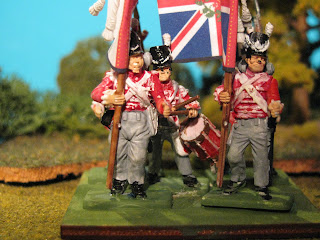 First up, the Cornwall battalion, white facings.  I departed from my normal basing to use a square base as the bases the figures come with make it impossible to get the three figures on the 2 by 1 bases without hanging over or looking like a failed attempt to board a subway car.  The figures are Victrix, I had gotten them in a trade over 18 months ago.  This is one of two units, I had blocked out the coats and pants last year, the second unit out of the box is still not done. 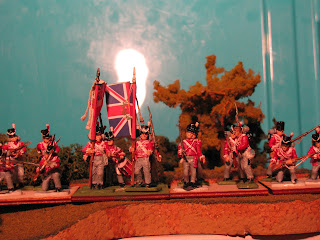 Most of the battalion in this shot. The variety of the poses in the box is nice, I am just not enthralled with the extra step of gluing the figures together.  Since there are a lot of poses, I guess unless I need more posing in the unit, I can stay away from using 'greenstuff' a little longer. 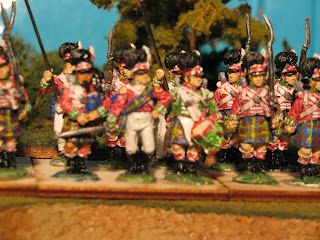 Now for the highlanders, Cameroons as painted.  Don't look too closely at the kilts, the yellow stripes and I had an argument which I lost. 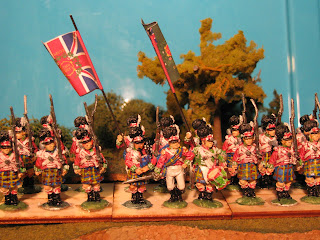 Finally the obligatory look at the whole (almost) of the unit.  To terribly mangle a quote attributed to Napoleon, "Peter, these Amazons are the best (painted)  I can send against you."

What remains to be painted?  One each Highland and British battalion, eight units of Hanoverian line and militia (I have five of the units primed, need to purchase three more.)  Then some artillery, including the ever popular RHA batteries, which means limber teams as well.   Then I suppose I will have to do some French.  You know, Ney tearing up orders, dust clouds for the missing Corps, casualty figures.

After this effort painting red, what is next?  ....something for Czar Barry to incorporate in is Martian saga. 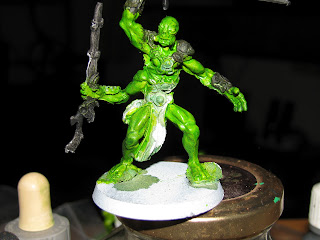 But that is another story for another day.

Finished up the Seaforth 's and a unit of Cornwall foot. I have one highland and one line battalion of Brits to paint.  Next it would be on to the Hanoverians.  Photos soon, I promise.

I have interspersed this effort with some other figures, mostly from Pulp-Figures by Bob Murch.

And, on Sunday, I was vindicated with saying I too could play at  the new WW2 games planned.  I have a platoon of about twenty FFL in late 1920's & 1930's .  Here are examples of the officers. 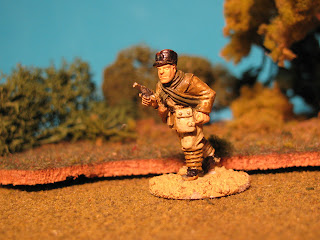 Spiffy, no?  Great figures by Artizan, they are destined for lots of play if the local WW2 platoon level games occur.
Posted by pancerni at 10:47 PM 3 comments:

Finishing up a few items

I had an hour or so tonight to paint.  Instead of starting a new unit, I decided to finish up a bagpiper for the 42nd foot (Black  Watch) and one of the two line battalions to go to finish up the English brigades at Quatre Bras.

The line troops have been patient since September last year, completing them means I have two British units left to prepare.  Then I will do the Hanoverian units, already have castings for 7 of the nine units needed.

I'll take a few photos of the troops tomorrow.  So if you are checking out this entry, please recheck Monday evening.

The question now is, do I complete the Q-B project, or spend some time on the other game project?

Hmmm, that was not so hard.  I will set up  a proper order of completion based on what the next games I will host or contribute towards now; yeah, that's the ticket.  I feel like some horses are getting some paint next!
Posted by pancerni at 11:33 PM 2 comments:

A little bit of Pulp

Roger came over and we did manage a small Pulp game last week.  It featured some Sasquatch  type beasties.  All the bases are still in need of final decoration. 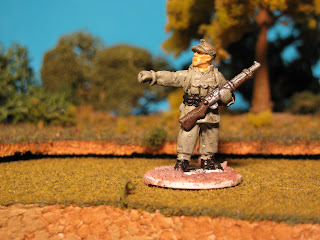 Not used but painted up were some new Pulp Miniatures Germans. 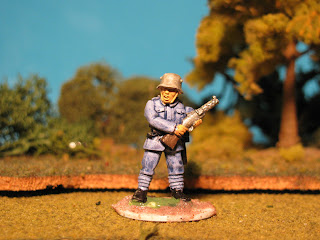 The game featured some special movement for the big hairy critters.  This will make up for a lack of ranged attacks, and keep their use in line with the backstory. 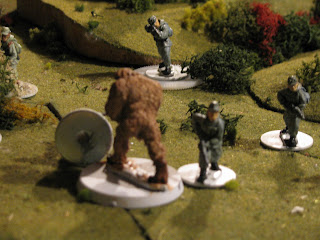 We'll replay the scenario, now that we have a better idea of what we want to do with it.   More photos then.

Email ThisBlogThis!Share to TwitterShare to FacebookShare to Pinterest
Labels: Pulp

As some of you know from following the blog, back in March we started playing the tactical rules for Monday Knights "Galactic Knights.'   Despite my feeble attempts at stopping the Carnivores, we (my buddy Roger and I) have decided to continue on the path of gaming with the rules, but limiting ourselves to the ships of battle cruiser size and lower.

As part of the plan, we decided a small campaign should be set up to generate scenarios.  Thus I can attempt through sheer strategic brilliance to reverse my inept abilities as the fleets meet.  Yeah, more likely the sector will be lost to the Terran Federation, in a swift and ignominious defeat.

So what rules to use?  How to set up the campaign?  I mean, it's not like whipping out Chandler or Weller and ginning up a Peninsular/100 Days campaign from the early 19th century.

Kismet favored us in the form of an old friend, Amarillo Design Bureau.   They recently published out with a campaign guide.  More a toolkit of suggestions than an intricate set of rules, the publication contains a lot of alternative methods and campaign component ideas.  The download version was very reasonably priced on special; it is now a resource for the campaign.


We'll use some of these in our upcoming games.

It sure does not seem almost a month since the last post, but vacations, Historicon and the odd summer project have certainly chewed the time up.

Historicon was a lot of fun, the venue certainly big enough. The trip down remarkably smooth as we hit no traffic and made it from near Danbury to Fredericksburg in a little over six and one half hours.  Peter had the car filled to the gunwales with troops and terrain and various gaming needs.  Still, a very comfortable ride, especially as I did not drive!

On the blogs "Blunders on the Danube" and "Barry's Redoubt" are some very good reports and photos of the games we (the Hof-Rats) put on at the convention.  Borodino had over 6000 figures on the tables.  While I took a few photos of each of the games, I seemed to take more of the players than the actual troops being moved.  Probably because I have met or emailed most of them before, the game really looked like a group of friends over for a game.  For some reason a lot of my game table photos came out fuzzy, so please check out the mentioned blogs for shots of the troops. 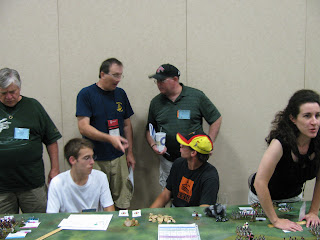 A good view of the Russian center commanders, and our own Ken B. who was proxied by his son.  Michelle is explaining that she, and she only owns the hill with the Great Redoubt. 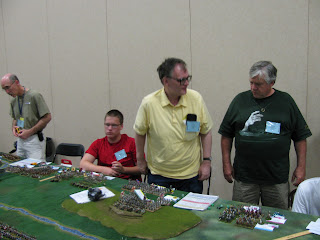 The Northern tier of the Russian command, the fellow in the yellow shirt is Dave who is also good at spaceship games. 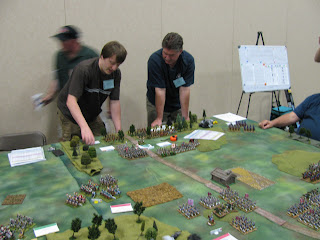 Rounding out the Russians are the commanders near Uttisa, who bravely stood up to a three to one set of French vs Russian move segment ratio and were holding on by the militia's fingernails by the end of the game.I am partly to blame, I gave the commander of the Poles a D6 marked in Polish (jedem, dwa tryz, etc).  How can you beat a die roll you can't  read?  We did have a cheat sheet that translated to English  that came with the D6.


I did spend enough at the vendor area, despite several vendors not being in attendance.  I managed to keep with my themes, Pulp and SCW during my forays into Brigade games, Age of Glory and RLBPS.  I was making up for a paucity of villains for my pulp games which I now can say is rectified.  But more on that another time.

There were two  photos that juxtapositioned themselves in the wrap around feature of sliding through the photos on my camera. 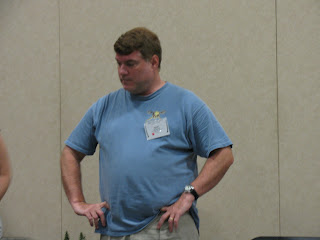 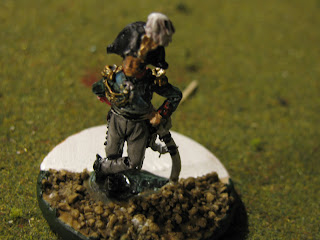 The figure is from the Perry Russian 28mm line, that of Gen  Ouvarov, the serious looking fellow is none other than Eric Burgess of Din of Battle, Archon, etc fame. Is this a matter of life imitating art or the reverse?  You decide.


And a mention of our farthest travelled figures, Gavin's Mecklenburgers, all the way from Australia, to CT and then to VA.  The photo is their high water mark of the game, crossing the Bridge at Borodino after forcing back a battalion of Russian Garde Jagers.  They go home very soon for campaigns down under. 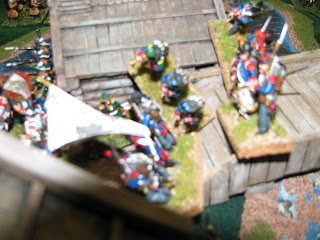 An old war gaming friend comes up almost every year from Virginia in August and manages to get in a game at my house.  This year Dave, Roger and I set out to play a large game of Galactic Knights space ship rules.  With a battle cruiser, carrier, seven cruisers, six destroyers, two destroyer leaders and five star bombers on a side,  it was an amazingly quick four turn, 3 1/2  hour game before we wrapped up at 5pm. As usual I played the peaceful Terrans who were being accosted by the ready to eat you Carnivore fleet. Dave assisted me running with the battle cruiser, three cruisers and a handful of destroyers.


Lots of shooting, lots of destroyed or crippled ships as my fleet lost two cruisers, four star bombers and a few fighters to the Carnivore's cruiser, destroyer leader and three star bombers lost and a crippled battle cruiser.  We did not take photos, something I am sure I am remiss in during games.  Just too much die rolling.

Dave had never played before, but did well, as his squadrons were basically intact, mine suffering most of the losses.  One glorious moment (for me) in the battle was when a star bomber actually made it to the rear square of the Carnivore BC, unloading its plasma torps and causing twelve internal hits after chewing through the armor.  The hits took out the main drives, several ship systems and some armament.  To add to the excitement, the rear arc armament could not buy a hit on the star bomber,which had such a lot of drift move left (the game recognizes inertia in  simple, functional and interesting way) that it was safe off board--and certainly out of range, the next move.

The game was fun, probably too large for a normal two player game given our normal time constraints. Dave had a good time, we learned a little more on how to mix the ships to tactics based on the ship layouts and armament.  Next up will be some scenario based games as we head into the next phase... sector warfare, with house rules. Of course we have not written those yet!
Posted by pancerni at 9:21 PM 2 comments: