Well, Greg got his box last week and I received mine today (3/16). I thought to take an opportunity to showcase the game factions over several articles. 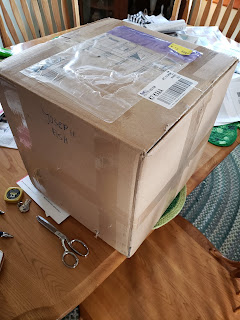 Just remember, everything you see for the game  came today, in this one package, some 14x14x14 inches, 20 pounds. 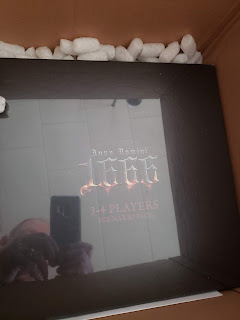 The expansion for 3 to 4 players. Included the extra decks, identification rings, boards, new rules and scenarios for up to 4 players. 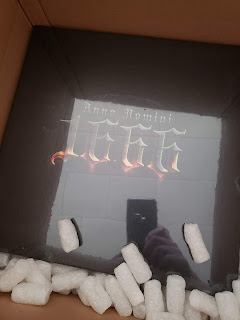 The base game components, which consisted of several boards, rules, scenario book, cards and id rings for two factions, and nearly 30 miniatures. 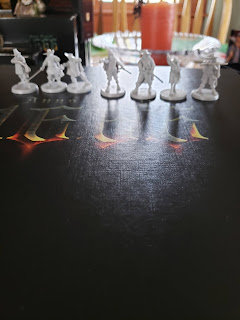 These include the French faction, drawn mainly from the King's Musketeers. 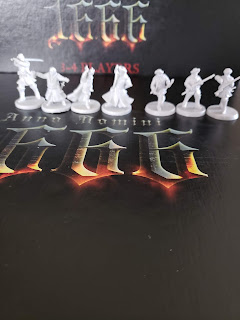 The Polish Crown's contingent, including 4 characters from the "Fire and Sword" trilogy. 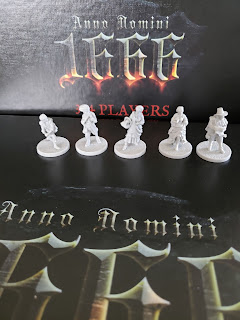 Then there are some towns  people, mostly good folk, wait, there's a thief running off! 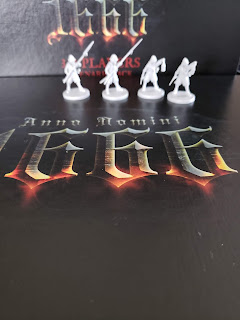 Perhaps the Night Watch will catch him. 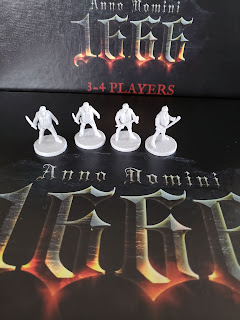 Or, he may run afoul of the thugs.

I will list the Musketeers and Crown forces again later, I decided to showcase the rest of the figures by faction, and these deserve close ups.

If you can't tell from the photos, the figures are all nicely done and will be a pleasure to paint.

We managed a second game in lock down mode...which has meant face masks worn.

We set up and played through three turns of AD 1666 's scenario 'evil spirit.'  It was only the second game for Greg and Roger both, with it being my third.  The scenario was played with the limits of the three factions as to characters, so the game had over thirty figures crashing about the board.


I played the Polish faction, including Kettering and  Baska; Greg played the Musketeer faction, to include Jean and Natalie; Roger took the Mercenaries' Monster Hunters as a faction, and included Father Maximilian as well as the 'goodfella's' contingent to bulk up the force. Each force had two or three commoners as well.  For those that would care, contingents ran from 41 to 43 gold coins in  character costs.

The game play was smoother than the last game, we stayed away from any characters with too many special skills, like divination or various magic books.   The most complication was in the special pistols used by some characters.

Shooting went well for Greg's Musketeers and Roger's mercenaries.  My Poles did not shoot so well, but made up for it in hand to hand.

We were so involved that I forgot to take photos.  Mark of a good game.  We will try another game son.  Maybe hunting the monsters?
Posted by pancerni at 8:58 AM 2 comments:

Despite the lack of posts in May, progress is being made modelling and playing over the last three weeks.  First up, some 17th century OG Cossacks. 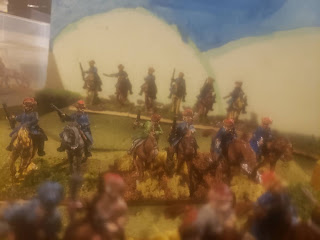 Not great but all three units shown.

There are several uses for such an esoteric unit. The obvious, using them for an East European based game, the handy use of either "Pikemans' Lament " or Piquet's "Anchor of Faith" will meet requirements there; or/and use as extra Cossack units in this year's campaign, utilizing either "Chosen Men" or "Les Grognard."

Also some re-basing (to include flocking) of the Bavarian infantry and artillery units. Not that they needed re-basing, except to conform to my unit layout. 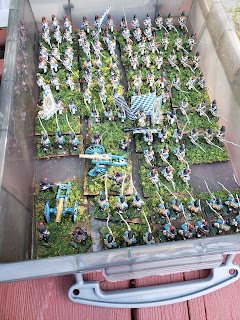 See, a whole box full, such nice castings. Thanks, Roger!
Several other units are in the pipeline,  but I did want to share the Russian field hospital unit.  The two stands are from one pack in the Perry Miniature's line.

Such a cool piece of kit, I will show it twice. 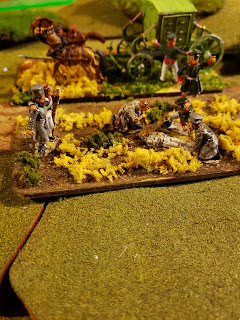 OK, I did need two shots on the wagon, after all.

I have had the casualty party done for some time, but the medical wagon and the basing just recently came together.  I hope you like it.  Now my Russians can get the care available to them.
With the recent shutdown due to the pandemic (yes, even here in the wilds of bear country) some of the extra time allowed me to research and even follow through on ordering a few figures to complete my "Chosen Men" project.  But more on that later.

Bears, figures half painted and other notes

Well the bears continue to use the yard as a path to the neighborhood. One older male went thru twice Friday and  a younger male was frolicking in our driveway  underneath our bedroom windows at 7am.

There is a unit of 17th Century Cossacks, some Napoleonic Russian Jagers and a bunch of Anno Domini 1666 figures in various stages of disrepair on the painting table.  It is getting crowded up there!

After almost two months of social distancing and basic isolation, we have got at least one game scheduled before month end.   May 22d will hopefully be a three way game of Anno Domini 1666.

Meanwhile a bunch of stuff has been primed or man color base coated or pushed along....sadly nothing is completed to show you right now, but here's what I've got. 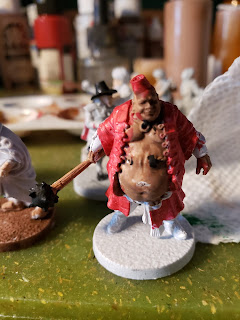 Hatmi, from the expansion pack o the Ottomans, messily tarted. 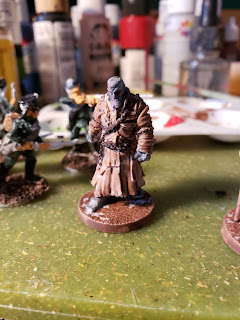 The Golem from the expansion 'The Rabbi and the Golem." Again, started but not quite done.

I guess I was in the mood to paint monsters but not magic users as the Rabbi and Ibriham the sorcerer are still basically just primer.

With tomorrow being both my wife's birthday and Mother's day I will be not be doing much hobby stuff for a day or two.

If you go into the woods today, you're in for a big surprise.... 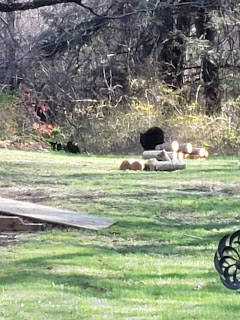 Tuesday I had a large male, no tags nor collar; yesterday, a smaller male with 2 tags, today, these 4. Yeah, that's three cubs on the left. 90 feet from my back door.