Well, we did not go to the movies Sunday, so I painted this battery instead. 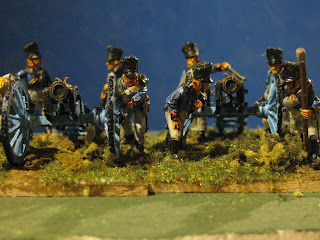 Photo taken without flash on.

The Prussian post 1806 uniforms are simple and easy to block out.  The artillery is mainly different in having black leather belts to hold equipment. The red piped black facings show up rather well on the figures. The guns are not quite that bright in real life, I may try undercoating in black next time for the woodwork on the carriages themselves next time. The castings are the Perry Miniatures foot battery firing and foot battery loading.  No two figures the same over the eight crewmen, lots of animation. ( Did I mention I like a lot of poses?)

Taken with flash on. Notice the lack of shadows! 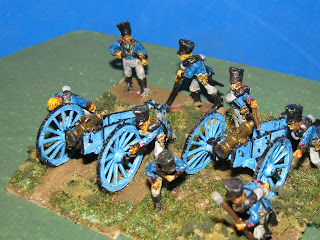 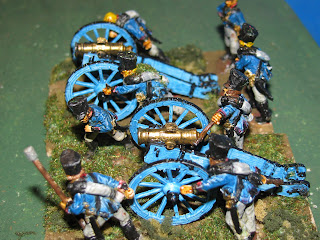 Why a Prussian battery?  Well, I have a Prussian foot unit painted and another promised to be on the way.  With two units of cavalry primed and in the painting queue, I felt they needed artillery support, and the battery was eight figures and two guns.  It is the only all howitzer artillery in my collection, and has a counterpart in the 1815 campaign, as Howitzer Battery No. 1.

I may do a Corps of Prussians after I  complete my Quatre Bras project.   Might.  Sigh, who am I kidding, the black hole of Napoleonic project creep claimed me a long time ago. It's 'only ' nine battalions, or so.

Not a bad afternoon's painting.  Well, basing and priming not counted in that time.  The guns are done in Blick art supplies craft series blue, the gunners in Vallejo Prussian blue and Ceramcoat Dove Grey. The red piping done with tube acrylic.

They'll come in handy for our imagination based campaign, as well. Watch out if you stray across our borders, Benefice!
Posted by pancerni at 8:29 AM 3 comments:

Something old, something new

I have been gaming with miniatures since '73, maybe even a little earlier. In that time I have painted up a fair amount of stuff, whether it's figures, terrain, vehicles, or what nots.

Once in awhile I get to revisit a unit I had previously painted.  Mostly this happens when I start collecting a new line of figures or the 'scale creep' affects my choice in continuing a type of unit.  I have probably painted  the winged hussars of 17th century Poland the most, with at least 4 iterations: old Mini-fig (pre '78), 'new Minifig (post 1978), Ral Partha, and the latest,  Old Glory.

But what happened recently made me think about how far we've come , as gamers, with the resources we have in the 40 odd years I've seen.

I had once upon a time collected a small British Napoleonic army in the scale of the day, 25mm, using Mini-figs.  Naturally the one, and probably the first, of the cavalry units I painted was the Scots Greys, or Royal North British Dragoons.  What drew me to doing the unit was the animation of the castings available for the unit, probably based on the painting 'Lady Grey" which captures all the chaos and movement of a cavalry unit at the charge. This was the only cavalry unit the minifig line had in such a multitude of poses.   I found the unit, one of only a couple left from days gone by...the other British castings long ago traded or sold off. 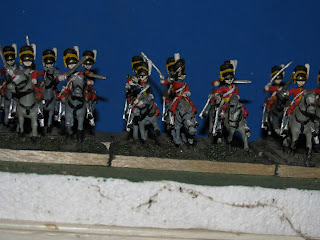 Wow, you must be thinking, this guy is old!  Well, you'd be right.  These are figures from and painted  in the mid 70's 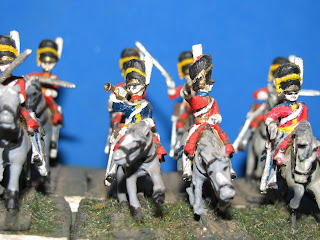 Of course, time marches on, and in preparing my units for Quatre Bras I kept visiting the Perry Miniatures website and quite often viewed and gazed on their version of the unit as it appeared at Waterloo. 'Nuff said, I purchased them in the fall, they're here and they're painted and in all the glory my skills can render:  I know they did not appear at Quatre Bras, but they did do some good work a couple of days later.  Besides, I needed some heavier cavalry for my imagination campaign...these guys and the other two regiments of the Union Brigade will fit the bill just fine. 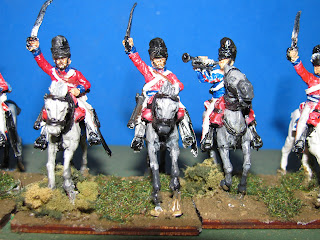 Note the bearskins are covered as they appeared in June 1815.  Except for the Colonel's figure. 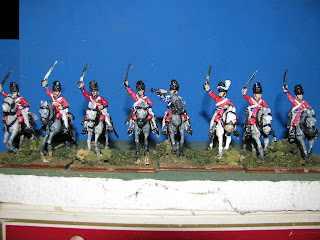 There was also the same situation with a Highland mounted officer from then.... 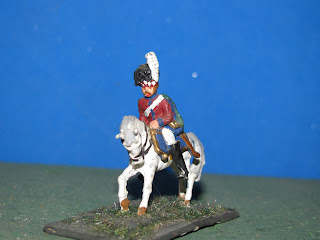 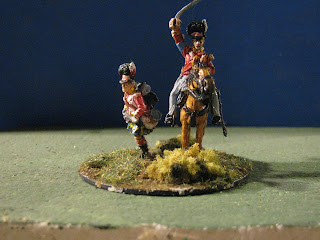 So much for the trip down memory lane!  Now back to either painting or going to see Hansel and Gretel, Witchhunters at the picture show.  Honest, the boss said we should go. ;-)
Posted by pancerni at 11:51 AM 3 comments:

Email ThisBlogThis!Share to TwitterShare to FacebookShare to Pinterest
Labels: Scots Greys in 1815

Well, the title explains a lot, a bunch of units that just jumped up and said they needed to be finished, that I'd spent enough time doing things like watching Torchwood episodes, re-organizing figure storage and exploring boardgames new and old.

First up is the first of the 4 militia battalions in Best's brigade.  The  brigade's other  units are yet to be ordered but will look very similar.  I need to get some Hanoverian flags as this is part of Best's Brigade but I also have Kielmansegge's brigade to paint up. These are the Perry miniatures Hanoverian militia ' marching, relaxed.' 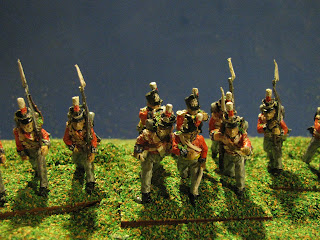 Next up are the Gordon Highlanders, a part of Pack's Brigade in Picton's division. The yellow facings were a change from the blue and green facings I had been doing.  I started off last year with a Highland infantry unit, so I suppose this is the end of that group of three. This unit I did with the figures shown at the charge, differing from the Black Watch and the Seaforth battalions which are both at the advance. The figures are Perry, the standards from the Warflag/Napflag site, the staffs are brass wire. 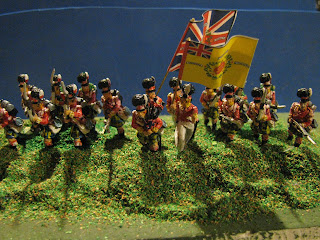 I did finish the two units within a couple days of each other, and today being a 'snow day' ( New England is supposed to get between one and two and one half feet  of snow ) I will attempt to complete their basing. 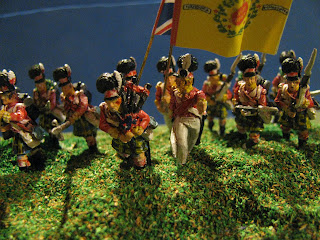 For the photos, I resorted to the trick MW and WI often used, that is to scatter flock on the unfinished stands, for the shoot, and then return the loose flock into the container.

If I get ambitious and lucky, you may see Braun's Hanoverian Battery and the Kielmansegge Jagers with proper basing as well.

That said, there are several bottles of refreshment, two Pizzas, some Shepherd's Pie, pork chops, ice cream and nachos,  even strawberries for a fruit concoction in competition with the basing for my attention over the next couple of days.    Ahhh, winter. Good thing we just finished all of the Torchwood episodes on Netflix.

I received an interesting phone call from one of my gaming friends, named Dan.  Dan is an inveterate scrounger and comes up with some amazing things at times.

I have a set of 'Zeppelin Truppen' by Bob Murch which have been the de facto bad guys in a lot of our scenarios; I mean, after all, if you can't arrive by automobile or be bothered to call ahead before showing up, your manners are suspect.

Long story short, Dan had remembered  the need for a blimp.  I'd always remarked about the lack of one, and even huffed on about getting some fabric and balsa wood, like the radio control crowd models.

Well, Dan found not only a blimp, but a proper sized one.

And now I realize the Zeppelin Truppen are so nefarious as to not respect private property...... 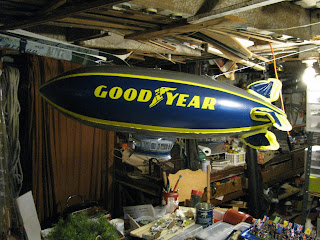