We tried it almost 20 years ago, with only T-34's and plastic Russians for the most part. Slowly after that the lead starting coming into the collections.  Anti-tank and artillery, odd tanks and supporting weapons.

The Eastfront claimed our attention for nearly three years, with a game once or twice a month during the time. Despite good intentions, we made it only through three campaign turns before we stopped.

That was then, this is now.  With many more of the correct tanks and wepons, we are trying again.  We are limiting ourselves to the Northern German effort to take Leningrad, stalwartly resisted by two Soviet 'Fronts' which are defending until the reinforcements can come in behind to save the day.  So far the Germans are advancing on a broad but shallow front, leading with the infantry battalions of  German regiment. Bialystock and Sialiau have been lost, Kaunus and Grodno are also reported ablaze. Riga and Wilno are bracing for attacks.  Four rifle brigades and a tank brigade have been involved on the Soviet side, with three or four battalions of German infantry accounted for so far.

Here are a few photos to show you how dogged the fighting is, ripped from the correspondent's film records early in the second camapign turn as the fight for Lithuania rages on. 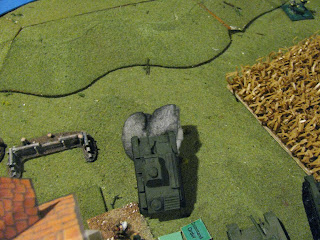 A T-60 crewed by heroes is succumbing to the invaders artillery fire. The sacrifice of the valiant crew preserved an entire company of Soviet infantry to fight another day. 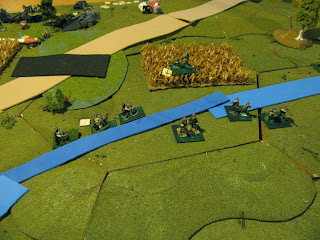 The despicable Teutonic invaders did not even grass all their stands...they shall not get any Soviet legumes easily! 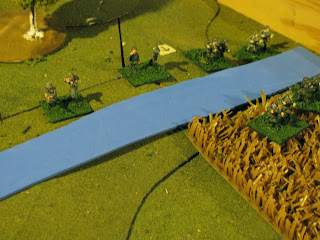 The Hitlerites are afraid to get wet in the waters of Mother Russia (oops, this is still in Lithuania, technically...still,a Soviet for at least a couple years now!)) 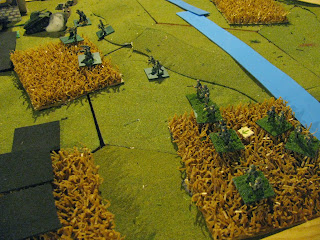 Another view of the German infantry advance.  The black foam marks where the German barrages are landing. 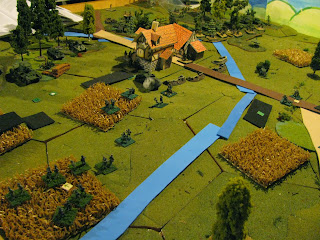 One can just make out the Tank battalion, which after destroying a German unit falls back for more ammo. That's our story, we're sticking to it. Other Soviets can be seen behind and to the right of the village in hte woods.

So far the invaders have made slow progress; the worst effects of the first turn Axis air attack and the attendant command confusion are behind the Soviets.  The July I turn has two more battles scheduled for the Northern zone where the Baltic and Western fronts are attempting to slow the German advance.  The big worry is the lack of intelligence on the whereabouts of the German panzers.