Campaign notes on economics, spies and building of naval forces and fortifications

Well, I have decided that it all boils down to choices.

Let me back up a little; this is the fourth play through mail/email/blog campaign and I do think  it my last.  The shared adventures of the participants in all the earlier iterations taught me one thing.  Detail in campaign rules just spawns more detail to chase down special cases and details.

Rather than go with the rules I have been trying to prepare in what was the style of earlier campaigns, I am going to attempt this in a set of opposed die rolls where the ruler tells me what they want and then gets a report back on what happened. I think reading through the next few paragraphs will either make it clear or totally obscure my ideas.

Every strategic turn ( 4 each year, based on the seasons) each ruler will get a D20 as their 'first roll' for what they want the effort to go to accomplishing.  The opposing roll will always be a D8.  A ruler can attempt more rolls, going down in ''die type' each extra attempt (and modifiers) until they reach, and lose, with a D4. In plain English, a series of successful rolls would be with a D20, D12,D10, D8,D6,and D4. All opposing rolls made with a D8.

Certain attempts would adjust the die downward even  faster as deductions would stack. These are detailed in each type of endeavor.

Naval forces require a roll for proper fleet maintenance, a roll to add a sloop, a roll with an extra deduction to start a larger ship. Ships being built would take two strategic turns if a frigate, four if a ship of  the line. Brigs would still take just the one turn but affect the die roll the same as larger hulls.

Construction of fortresses would work in a similar fashion. This would best be sorted out on a place by place basis, as it depends on the size and layout of the fortified place.

Maintaining an overall intelligence network would be a die roll effort. Making a 'concerted effort' in another country would require another roll for each such country.

This keeps the strategic moves free of detailed book keeping.  Each ruler can send an email with the requests for rolls, in' project order' and then receive the results.....yes, I will do all the rolling.
Posted by pancerni at 1:24 AM 1 comment:

This  set, a pair of figures (mercenaries) to supplement a faction as opposed to a new faction.  The figures are done nicely, the golem in scale would give any adventurer pause.

The part I like the best is the rules accompanying the pair really draw strength on the mythos of the relationship of the Rabbi and the Golem. One comes through the other, the one protects the other...I'll let your imagination fill in the blanks. 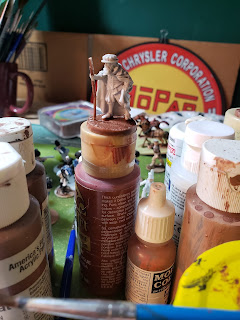 The Rabbi enters the game with divination and kabbala skills, some useful items and the ability to increase the faction's warchest. Not to mention, his creation. 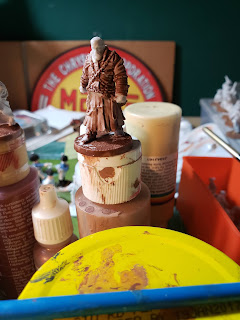 Big, strong, hard to kill, harder to keep it dead. Implacable, nasty in a fight, did I mention hard to kill?
Evidently not available yet 'til 3rd quarter from the company, it was available during the kickstarter, so "I got mine."
I will be finishing these two figures pant schemes  in parallel with the Ottoman faction figures.
Posted by pancerni at 3:56 PM 2 comments:

Inside joke for my local players.  Beware, my spouse played the ' Death in the Tavern ' scenario; said she would play the game again. Here she is post game, checking her phone. 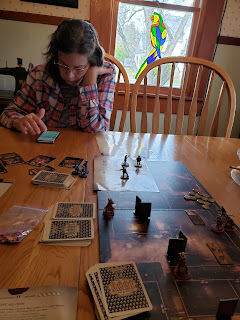 We played Poles (me) versus King's Musketeers (Pat).  We have been watching some BBC "Musketeers" on Hulu.  She also said she hopes my regular Friday group can get going again soon.
Posted by pancerni at 9:40 PM 2 comments:


Funny, the painting is going in fits and starts. First up, the penultimate jager battalion to finish off my 1812 Russian line division. Actually done, mounted and stands dressed for a change.

Jagers. One more battalion to go. 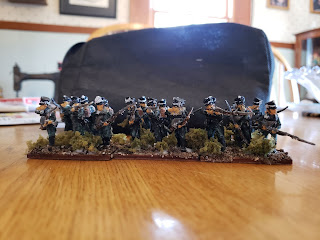 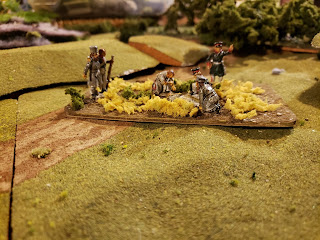 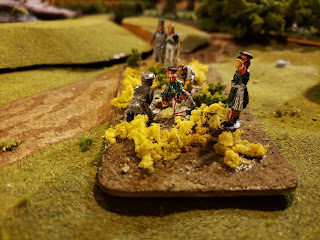 I have to mount the surgeon's wagon and dress the stand. The figures are all from the Perry's Russian napoleonic's line.

The Spanish faction is the last 'faction' as opposed to character group, for the game.
The leader is El Capitan, a decent fighter with some skill shooting. Other heroes include Catalina, a bruiser with 10 wound points,El Baratero, who combines high sword skill with excellent knife throwing , Franciska, who has good shooting skills , and three Hidalgos as support.

Additional hero support comes from Don Quixote and Sancho Panza.  As a group, the alignment is Neutral to Chaotic. 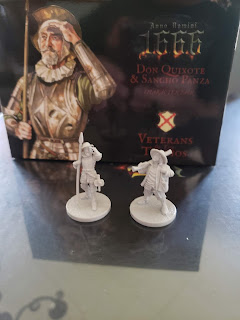 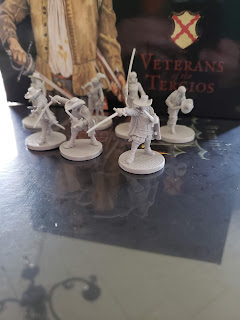 Everyone else.
Posted by pancerni at 4:50 PM 2 comments: 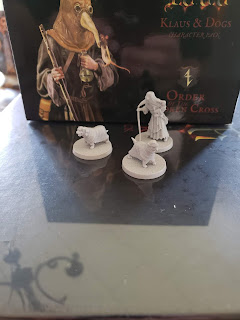 The dogs are called Phobos and Deimos, their handler is named Klaus von Cronberg. 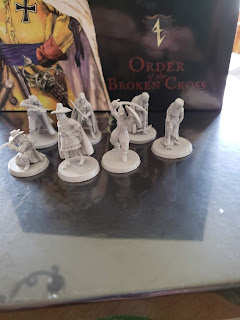 The cult is led by Siegfried, backed up by Eisenhans (with shield), Freischutz Johann (with musket) Sister Ada (never met a nun with legs like hers), and finally, three knechts --with crossbows and hoods.

The heroes in this group are either evil or chaotic. I would expect to see other miscreants as hired thugs, foot pads, etc.
Posted by pancerni at 4:12 PM 2 comments:

conflicts in a fashion not yet entirely clear

Okay Peter...and the rest of you erstwhile potentates, here is how the campaign works:

Suppose Your country- I am using Peter as an example as he asked first...the rest of you will need to work out how your own cards work...decides to have an armed conflict with your eastern neighbor, the K&K Dual Monarchy.  The following steps are taken.

You declare war. (This is the acceptable way it is done. )

You pick weekly or monthly turns. If you do not want to start the conflict the first month of a calendar quarter (remember, that is the time scale of a turn if everyone is at peace.) you must say what month & week you will declare hostilities.

This allows for anniversaries of prior events to be manufactured as the cause of the war.

You nominate a province as part of the cockpit of war. For instance 14A. If you lose the campaign, this is the province you would shed. The contiguous enemy province, 17A, is at risk for the K&K.

The umpire then takes the two (interestingly, 5x5 cards) provinces and fits them into the Theater of War grid (8x10). Extra terrain is drawn in and, voila, the campaign map is drawn.

The umpire will also assign national will  point values similar to those in ToW rules.  The location of,  and total points are posted to the opposing players.

Armies are set up and moved as per ToW.  These rules pages are quite dense and are the reason for your rosters of forces and the need for generals names....we really can't have 'column a' and/or 'column b' running around the country-the peasants are revolting enough.

Orders are then submitted. And it's off we go.


Loss of battles and territory affect the values of national will points. Getting to zero means the monarch' s power structure forces a suit for terms. A treaty conference is called at a neutral capital, and the province trades hands, or is divided...whatever is called for in some tables the umpire will roll in reference  for a result.

Not to be bad sports, you must lick your wounds for a campaign quarter before you can pick the same province lost to have another campaign. You can fight another neighbor...or get picked on by another.
For instance, S'Gottland could rally round the Basques and invade 3A from 4B.

Make sense now? I could go into more detail about moves, weather, forces...but the mechanics are in (mostly) ToW and, by gosh you are a monarch...details like that are beneath you.