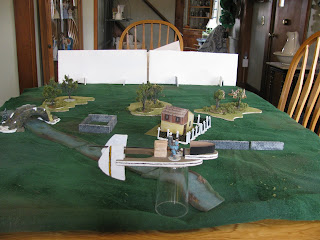 Screen represents 'line of death,' an upgrade from our last game like this...

It had been a little while since Greg and I had played some IHMN, and we found out somehow Roger missed out on trying the rules. So the USMC and the Prussian Society of Thule made a dash for the dirigible in our production of the scenario "Death at your heels." Roger will take a group of hardy USMC versus Greg's Society of Thule. 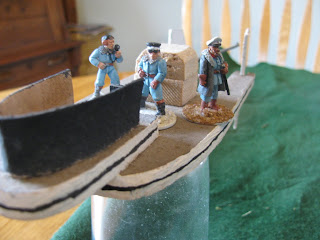 A regular Friday afternoon game, played out in about 90 minutes...part of what I like about IHMN, quick, fun, scenario drive.  The playing area is about 40 nches square. 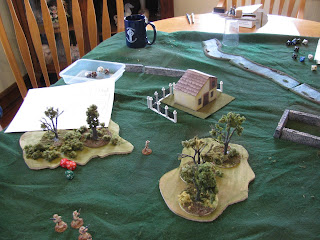 Woods, fences, houses, river would all slow movement which could lead to embarrassing situations.
Roger moves up in two groups on the left side of the table. 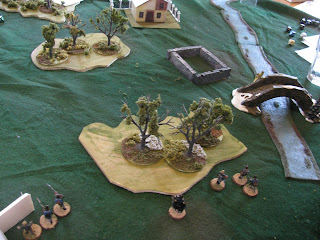 Greg opts to take his force, split into three groups, up the right side of the table. 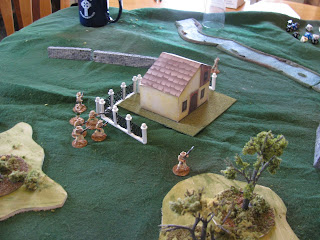 For some reason, the USMC are moving quicker, although covered better, their path does not have a bridge! 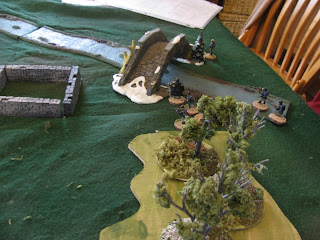 First across the Lemax bridge is one of the German leaders.

Greg's soldaten turn into  zombies if taken out near enough the German carrying the  field generator. 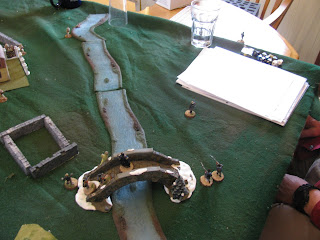 Germans mostly across, but so far from the taxi. (Uber problem?) 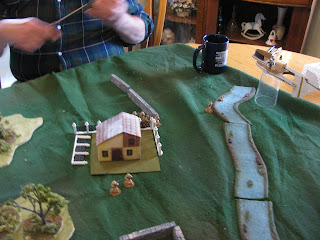 USMC closes in on the escape route.
Roger now sends his leader to hold the taxi ( at least, what he told the men,) 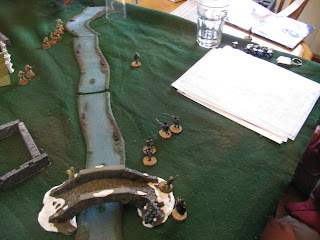 Both sides break into firing groups. 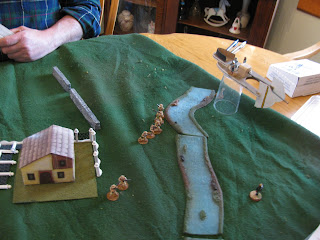 Roger concentrated on Greg's leaders, who kept making their pluck rolls. Greg shot mostly at the groups of Marines, which led to more losses than he took. 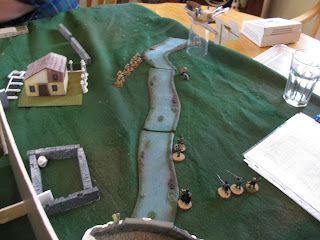 The line of death moves closer. 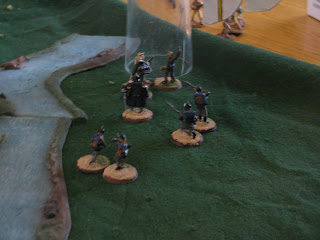 The last, desperate defence of the access to the escape craft a defiant marine holds the enemy off for two turns before perishing.  Four USMC members escape, The Society of Thule is smaller by one chapter, for those keeping score USMC 22, SoT 10.  The line of death conveniently stalled for two turns, then dramatically moved forward 14 inches in two turns near the end,

The game day actually featured the imbibing of tea by some of the participants.

Previewed were the just arrived figures for the next new company; the Lion, Witch Dorothy Gale (she must be, she dropped a house on the WWE), Tin Man and Scarecrow from Reaper.  Oh, and the WWW, who is out for revenge.

See the excellent work done on ideas and character stats for these and other characters.  You will have to do a little digging into older posts. I did.

Our local players are in the planning stages of an imagination campaign.  The idea is to 'borrow' from the past, a previous campaign, the backstory elements and combine them with new ideas for an ongoing campaign which would suit local tastes.

So far the long suffering Roger, Greg, and Barry have opted in for a country.  I have drafted a map of the small continent that would host some seven nations of various sizes.  Without the actual cards, the map is not very useful to tour the continent.  I will also post a map of the countries locations.  Later on maps of countries will be made up and shown, probably as parts of turn reports on the main blog page.


New continent for the 2019 imaginations


Basic layout of the cards. 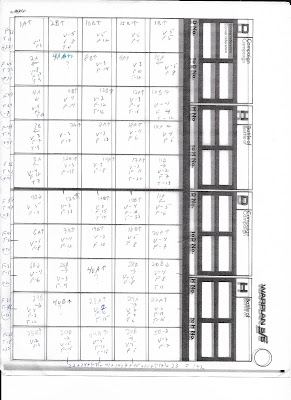 There are three cards I have added to the existing Warplan 5x5 cards.  I wanted the continent to be more open and rural than the standard mix allowed.  They are called 40A, 40B, 41A. They follow here: 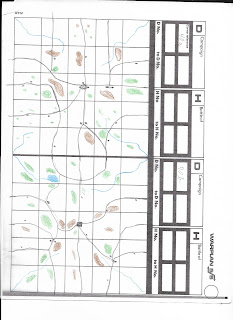 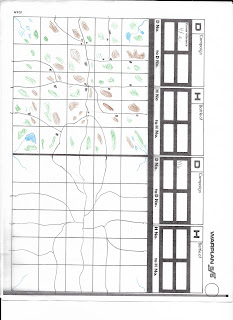 I will post the gazetteer pages of the new map cards on this page later.

Slowly there is some painting going on, presently some Napoleonic era Austrians.  A lot of work on partially done Bolt Action contingents, Eighth Army and Free French at the moment as well.  SInce nothing unit sized is done, I have no pictures to show.  There are a couple of nascent escalation leagues at hobby stores in the area...I have missed the start of these events due to my 'OOOH shiney' method of scheduling painting time.

More importantly is a series of discussions with my Friday afternoon regulars, Roger and Greg.  A map campaign is slowly evolving, using the Warplan 5x5 cards in a new configuration,  This is reminiscent of a campaign that started in 2009 and spanned about 4 actual years before wrapping up around 2013.

The campaign is to generate some scenarios using our collection of Napoleonic castings, Piquet's' Les Grognard' and 'Theater of War' rules as well as providing a tie in for some 'IHMN' and 'Chosen Men ' games. Some of the campaign maneuvering, battling and general nonsense will be posted here.

The 'IHMN' and 'Chosen Men' games will allow various plots to hatch against neighboring monarchs without an all out war occurring.  It will also get the benefit of scenarios being based on campaign situations for color.

Yes, the 'IHMN' rules are set 80 or so years removed from the Napoleonic era, but are great fun as well as representing balanced small forces in competition.

The 'Chosen Men' games will draw right from map based frictions too small to go he campaign battle report.

Mansions of Madness (Fantasy Flight Games) has a new-ish expansion 'Horrific Journeys' with three cracking good scenarios, several new investigators and monsters added to the rolls.  I mention it because I only found out about it (the expansion) by walking into a friendly neighborhood gaming store and seeing it on the shelf...despite being registered for the game and uh, like four expansions!


Unrelated but still useful:
Oh, if you enjoy the Snappy Nappy rules and the annual campaign in a day happening up our way near Hartford, CT, this link should provide information on the actual day and campaign outline.

This is to direct you to Peter Andersen's "Blunders on the Danube" blog. Peter (Gonsalvo) is participating and the actual organiser's info is in the article.

More tomorrow, especially if we get the high end of the snow forecasted for tomorrow.....I am raelly reday for spring to arrive.