One of the lesser played armies for Napoleonic era wargames is the one from Sweden.  The army did fight Russia in an attempt to hold Finland after Russia invaded, then returned to Europe in 1813 with an ex French Marshall as its leader.  The Marshall was Bernadotte, who was sort of on probation as king during the campaign; the nobility in Sweden were able and had shown themselves very capable of strongly suggesting that a king abdicate.

The campaign had as one of its controversies a feeling by other nations that Swedish forces were being husbanded with a look to after the campaign, putting extra strain on the Russian and  Prussian units in the same army.   Rather than go over ground much more thoroughly covered in most histories of 1813,  I thought to share sources with those who want to know a little about the uniforms of the Swedish army units, and of course put up some photos of the units I have in my collection.

There are two wonderful articles on Swedish army units for the time period, both of which are from defunct magazines, The Courier and Tradition.   Thanks to the wonder of the internet, a kind soul has put the pages up for view on one of the photo sharing sites.

Other resources for the Swedish army in the Napoleonic period include  websites by gamers from Sweden (they have a better chance of understanding the source material than the vast majority of gamers).  The first concentrates on the Russo Swedish War in Finland.

The second site has collected more information on the OoB and some period illustrations, as well as an overview of the war that proves useful.

I have to admit the Swedes were an early army for me to paint, the figures are the venerable 25mm Minifig Swedes from the Napoleonic range.  The paints back then I used were the Humbrol brand, and the style was pretty 'war games basic.'  Still there is a certain charm to these figures and they are practically the only castings I am aware of for this army and time period.   I know there is an odd elite figure or two for the infantry, but the Minifig artillery and cavalry castings are the only game in town that I know of being made in either 25 or 28mm.

So, on to the photos.  First up will be the cavalry units I have painted. The figures are all from the 1970's and early 1980's, and I believe they were all painted by about 1988.  Here are the first three units, the 'heavies.' 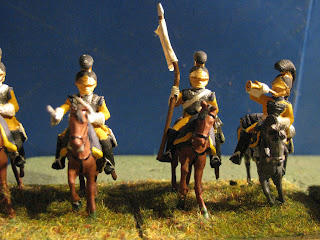 The first unit is the Life Regiment Cuirassier Corps, a bit of a mouthful but  a good unit on the table top. These fellows are actually the castings from the Swedish Minifig range.  The helmet is similar to but not exactly like some of the other nationalities classical ancients themed helmets.  Buff coats and pants, steel cuirass, black crest on a black leather helmet with brass fittings on the front. 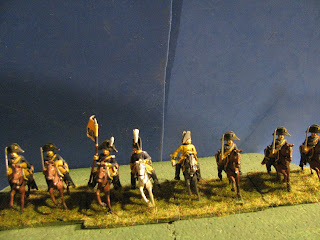 Next up are the South Scanian Carbineers, For this unit I used castings for Spanish Dragoons, don't tell the boys they are meant to be in warmer climates!   Dark blue coats, buff pants and belts, the bicorne make the unit easy to spot on the table. 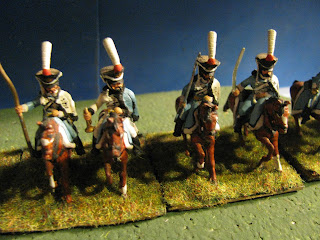 The third unit is the Lif Garde Til Hast, in the uniform as they would appear late in the Napoleonic wars, 1813 and onward. T he uniform is of a hussar pattern, and the headgear is a Russian Kiwer.  I used the Russian Hussar figure available way back when to build the unit. Light ish blue dolman and pelisse, black fur, white shako plume and cords. The horse blanket is the same lightish blue with a broad white stripe around the outside.   The unit has always been pretty dependable on the table, but then it is usually rated pretty well.

These three units make up the 'punch ' of the Swedish cavalry in the Army of the North.

Next time, the lighter horse regiments.
Posted by pancerni at 8:00 PM 6 comments:

I 'have so' been using my time wisely

Last post I alluded to going to the picture show to see Hansel and Gretel, Witch Hunters.  Well, I did and it was good.  Really, even the boss liked it!   Not a movie to take the kids to see, way too gory; but with a tongue in cheek attitude and enough anachronisms in technology to make me smile.

Also screened was Jack, the Giant Slayer which we saw yesterday; we are on a roll as all the silly movies are out.  Another good romp, not too far from the story we already know but with a couple of inventive changes.

If you have a child or two under 12 but over six, this would be a good one to take them to see.  There is violence, but less graphic, more old movie style.

After the movies, I have done some basic catching up on a few chores but little time for painting.  This should change soon, at least I hope.  There supposedly will be a few days with daytime highs over 50 degrees Fahrenheit, which will allow me to spray prime for the first time in four months.

On the 'oooh, shiny' front, the Hinterland miniatures line now has crew variations, Empress has some really cool Natal Frontier Horse figures and the Perry's continue to telegraph the next few purchases I'll make as the limbers for the Austrians are announced on their 'metal on the work bench' page.

So much time, but so much more to do!  Next 'project' is to get ready for the Snappy Nappy game coming up April 20th at the Time Machine in Manchester, CT.   For more details on that, see Peter Anderson's blog at: