After the day, Snappy Nappy AAR, of sorts

Back from an enjoyable day pushing lead around, the 1813 Snappy Nappy game at the Time Machine in Manchester, CT.   A half hour ride with Roger driving  across Hartford got us there about 90 seconds ahead of the gamemaster, who we saw make a last minute wrong turn to the venue.

After setting up, getting assignments.....as Bernadotte, the commander of the Army of the North, I started in Berlin, we began our moves.

At this point, I am going to direct you to Peter Anderson's blog for the complete set up and background of the day.  Peter was the game master and did a marvelous job of herding the cats, I mean, wargamers, to their respective starting positions.  You'll also get a great tour of the strategic and tactical maps, as well as a tour of most of the table  tops sans troops.


I chose the Army of the North as it had so many varieties of troops, I took along 2 Swedish cavalry units, six Swedish, three Prussian and two Russian, and two Hanoverian infantry units, four artillery units and a Cossack unit.  One must always have at least one Cossack unit from 1812 onward. It's just good form!

I received orders from Dan, our CiC (did not pick up your last name, my error) and leaving a garrison at Berlin (some very happy Hanoverian conscripts) proceeded down the road to Bautzen.  A funny thing happened on the way....I ran into a whole lot of Bavarians commanded by Roger!

That ended the strategic maneuvering  for both of us, as I got stuck into Roger's force. I should warn you here, Roger and I have been regular opponents since 1970 and so know each others' tricks. Luckily for me this day my tricks included rolling high most every important roll coupled with his afternoon of bad luck at dice. Still it was hammer and tongs for most of the afternoon for us, while the other corps danced around each other, finally meeting at Bautzen.

By 4pm real time, the Bavarians were unmasking Torgau, the Cossacks were hungrily eying Leipzig (told you the game was big in scale) and Bernadotte was sending messages trumpeting his victory.

We watched the agony of the Saxons trying to hold off two enemy corps, one in front and one on its flak. The 5 o'clock whistle blew with a Allied victory, which belied how hard fought the game had been.

I did manage to leave my camera at home, so no photos here.  Check the link above as Peter took several of just our table and definitely had shots of the other forces.

Overall I'd say if your local group wants to try a 'campaign n a day' that the Snappy Nappy rules are worth a look.
Posted by pancerni at 5:18 PM 4 comments:

The Time Machine in Manchester, CT will be the venue, Peter Anderson the game master for the Snappy Nappy  game set in 1813.  I am committed (maybe I should be committed) to furnish the Army of the North as a 200 point force for the Allies.

Peter's been coy about the table set ups, so I don't know what if anything he needs in the terrain department from us.  Roger, long suffering friend, is driving the two of us there and back.  He (Roger) is supplying a Bavarian Corps, and I will attempt to have him switch sides during the campaign.   After all, it would only be historical, right?

As a warm up, Roger came over today so that we could walk through a couple of turns.  The rules were pretty straightforward, and we made it through 6 turns...strategic hours, in about two hours of table top time.  It was assumed we had been given orders and had the ability to go 'up or down, as per the rules. The results were satisfying, to me at least as I had hot dice.

The real test comes tomorrow.  I will also bring a 200 point Reserve Army of Poland, an all Russian force with a large amout of seasoned and conscript infantry.
Posted by pancerni at 11:18 PM 1 comment:

A couple of months ago I mentioned the Hanoverian battery for Picton's division was just about finished, so here is a look at the six pounder and crew!  The crews and guns are from Perry  miniatures. 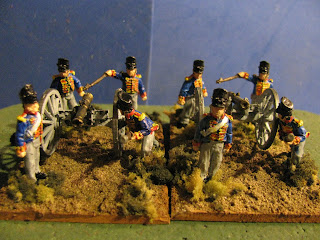 And the back of the gun crew. 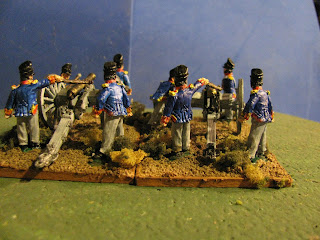 Also the Kielmansegge Jager Corps is based and ready to go on the table.  The figures are from Wesfalia Miniatures 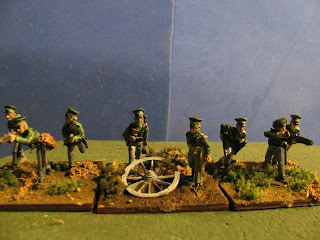 I just had to add something to the base! 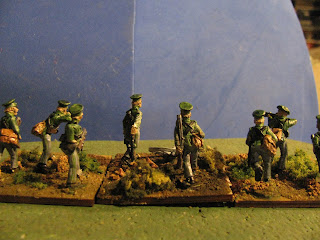 And so ends another post.  Hope you enjoyed these units, they should be on the table soon!

Well, a little later than I thought but here finally are the artillery units and a command  stand. The Swedish artillery was divided into two regiments of field artillery that were present in the Army of the North in 1813.
Most war game sources claim that little more than the artillery got involved when the Swedish contingent was on a battlefield, a shot at Bernadottes attempting to spare Swedish a large casualty list.  In Nafziger's book on the Battle of Leipzig it is mentioned that Swedish Jagers were involved in storming city gates on the northern side of the city.


Here is a battery: 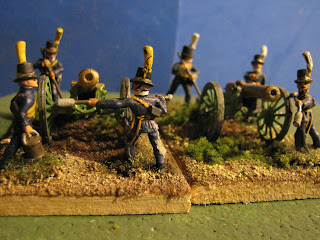 The distinguishing feature was the color of the plume by regiment, yellow and white. The jacket and pants were dark blue, the Swedish Kusket (hat) was worn by both regiments.  The belting was buff and the leather pouches black.  Swedish horse artillery, according to one of the articles previously mentioned had a 'falling plume' on a shako rather than a Kusket, but I found no illustration to suggest other uniform differences.

The gun carriages were painted a 'blue-green' and I have made an attempt not to go too much too the turquoise in hue.

To finish up, I have a command stand given to me by my friend Dave.  It represents Bernadotte in the filed as commander of the Army of the North. Again, various Minifig castings were used and the flag is hand painted. 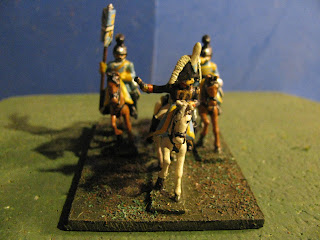 View from the front of the stand.  here he is in all his glory. 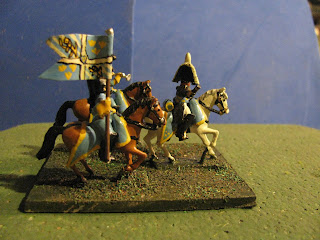 A side view, which shows off the flag. 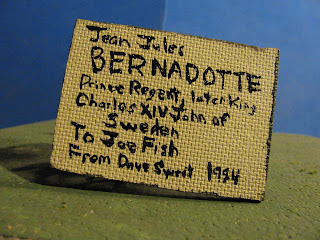 Giving credit where credit is due.....

Again, many tabletop engagements but sadly no simulations of Leipzig for these fellows, although a chosen few get to participate in the 1813 based Snappy Nappy event this weekend.
Posted by pancerni at 4:52 PM 2 comments:


I have recently picked up an assignment to teach full time at the local high school, in the field I am certified in the state.  This means an increase in hours spent as lesson preparation, student assessment and grading are now of my duties.   O, and the pay is better, at least until the end of June.

So that's my excuse for recently being quiet, but now the article on the Swedish Napoleonic light cavalry units can begin.  The units are again, those from the 1813 campaign in Germany. The three units mentioned were with the Army of the North.

The West Gotha Dragoons are outfitted in a dark blue coat faced red on collars and cuffs with a white piping around the front seams of the jacket. brown pants with black books complete the uniform.  The headgear topped is  a helmet of black leather with brass reinforcements, with a black peak and a white plume and white horsehair crest . 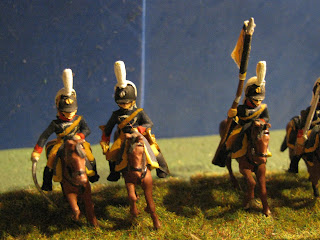 The horse furniture is dark blue saddle blanket, pistol covers  and valise, all with a broad yellow band.

The Smalands Light Dragoons had dark blue jackets, yellow cuffs and collars, buff belts and trousers. The headgear was a peakless shako, slightly wider at top than at bottom. There was a white plume and cord finishing up the shako. 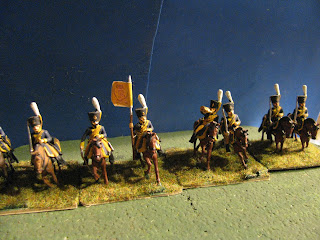 Both the West Gotha and the Smalands  regiments are Minifig 25mm troops, done back in the early 1980's.

The final unit of light cavalry is the Morenska Hussars, one of two hussar units in Northern Germany in 1813, but the only Swedish hussar regiment with the Army of the North.

These figures sport the buff pants, dark blue pelisse and dolman with yellow braiding and buff belting. Yellow cuffs and collars finish off the coats, the boots were black. The headgear is the tall mirliton similar to hussar units in other Continental armies with a white plume and red cords. There was a tail (my term) of yellow material which hung loose from the back of the hat down the the middle of the back.  A black cartridge box was worn on the back. 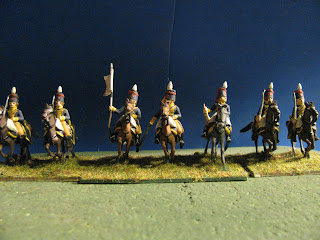 A dark blue saddle blanket, sabertache of the same color both trimmed with a yellow band were complemented by a white sheepskin cover over the pistols.These fellows are Minifig 25mm but I believe were in the catalog as Spanish cavalry.  Well, a hussar is a hussar, after all, and they fit the description in the Courier article.

Well, there you have it, these fellows and the heavy regiments have been excellent performers for nearly 30 years on the table.  Next post will feature the artillery.
Posted by pancerni at 6:54 PM 5 comments: