We had a great weekend, it included a trip down the local Bike trial with our daughter and our two grand daughters.   After an afternoon on the bikes and dinner, I had the grand daughters pick a color scheme from the Hinterland website for me to paint their personal figures.

The younger picked a light blue dolman and purple skirt combination.  The older chose a grey and red combination.  Their mom will get one as well, a mix of the colors from her daughter's choices.

Oh, they all wanted Palomino horses.  Here's the start of this project.
Posted by pancerni at 11:17 PM No comments:

Email ThisBlogThis!Share to TwitterShare to FacebookShare to Pinterest
Labels: Hinterland

Last few units getting painted for Borodino at H'Con

Well, just about two months to go, I want to list out what's left to paint for the Borodino game so that I can keep up with my promised contingent. 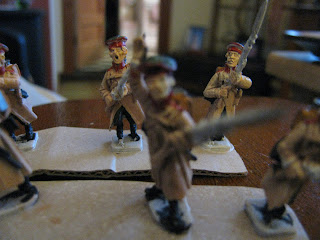 There are two nearly completed Russian line battalions,  from OG;

half of a Perry  twelve pounder battery (hope the other half comes soon from the Warstore), I also am readying a old Mini-fig atillery limber team. 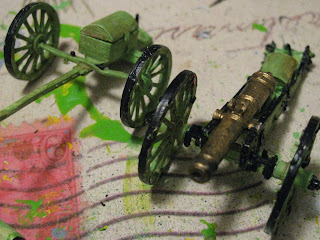 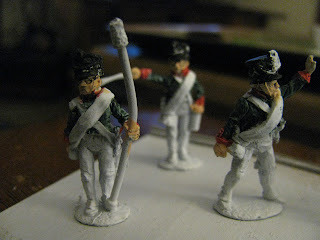 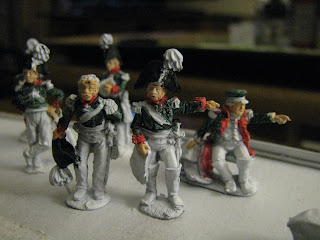 This is such  a great set, even a Kutusov as he probably appeared that day at Borodino. 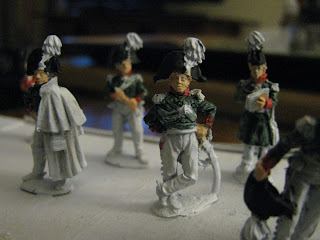 Well, except for an excursion to the Hinterland  folk these are the items getting painted next.
Posted by pancerni at 11:02 PM 3 comments:

Just a quick note on a company's work

Several weeks ago I ordered some ships from Monday Knght Productions to fill out my Aquarian fleet, add some Terran ships to my collection, and lay in a set of fighters for most races.

I received the order this Friday , my greedy hands clawing through the USPS envelope to get at the goods.  I was happy with the ships I received but noted I was one 'pack' short, some fighters and bases.

I had intended to email them to let them know about the shipping error and the missing item.

The next day saw the postman deliver the remaining set, which was mailed out separately.  I did not even have to complain to the good folk at Monday Knight Productions,, they must have caught the error and fixed it while the first batch was enroute.


Pretty good service eh?!  I'll probably be getting more ships from them later this summer.  After I paint up this batch.
Posted by pancerni at 10:58 PM 2 comments:

As promised, here are the completed ships as they presently make up the Aquarian fleet.  On order from MKP is a battle cruiser and some fighters of the various races.

The fleet presently consists of an attack carrier and supports...five armored pursuit ships; 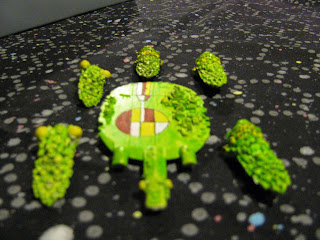 the First Cruiser Squadron, the 'Green Hell'  (thanks Peter, for  that one)   You shall know them by their stripes. 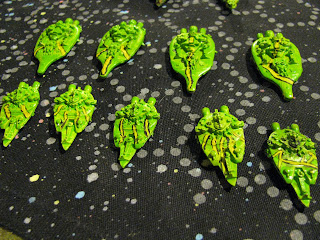 and the Second Cruiser Squadron the 'Screaming Yellow Zonkers.'  Again modeled loosely on the coloration of a type of treefrog. 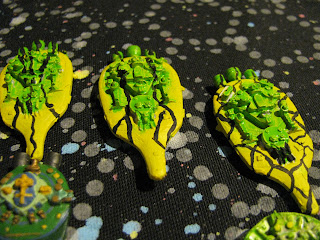 After the disastrous action around Zion 70 to include the loss of the Attack Carrier 'Lost Hope' the naval board brought back the idea of cruiser squadrons as the main building block for small fleet actions.  The carrier was lost along with three destroyers and a destroyer leader and the armored pursuit ship to the Carnivore fleet encountered two weeks ago.   It is hoped the punch of the cruiser class ships will redress the balance in the Aquarian favor.
Posted by pancerni at 10:17 PM 2 comments:

Well, if the game at Historicon is half as much fun as the two play tests, it will be a barn burner.  I tried to hold the Fleches, got run over and flanked; in the center three Russian Cuirassier regiments held off ten French cavalry units, destroying three French Cuirassier units in the process, and to the South, a militia unit of Moscow Opelcheynie (sp!) routed a Polish line battalion.  We called the game after four hours of play, with the Russian and French players to commit the respective Guards into the fray.

The table will run 30 feet, here are a few shots of the game table from today. First the obligatory down the table view, ten feet of French and Russian troops, Greg and Barry, the well played Russian commanders are looking at the dispositions, although Barry may be asking Patrick Stewart advice on tactics at the time of the photo.

The game is being played with Piquet's Field of Battle, 2d Edition rules (FOB2). 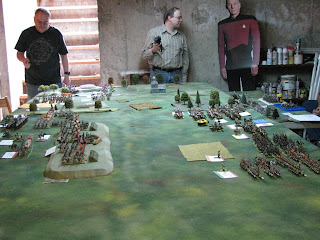 Watch for more information here or Czar Barry's or Peter's Blunder on the Danube blogs. (see links).
Posted by pancerni at 9:54 PM 5 comments:

Off to South Borodino

Sorry, no photos this morning.  In an hour my friend Roger and I will be traveling to Peter's house to play test a scenario based on the area around Uttitsa and its environs, the Southern part of the Borodino game we'll be putting on at Historicon.

I'll post a few photos tonight, but you'll have to wait and watch at Peter's blog (BlundersontheDanube) to see a battle report.   If we aren't back too late, that is!  ;-)
Posted by pancerni at 10:07 AM No comments: