I decided that the dragoon units will represent the 9th brigade of the 1812 3rd Cavalry Division.  Mostly because the Kourland Dragoons have turquoise facings. The Orenberg Dragoons have black facings, so they get painted first, sort of a vegetables before dessert schedule of painting.  Both units will have horses in the bay and roan colors, with the musicians on grey mounts, of course.  Here are the Orenberg Dragoons, a few more days and the Kourland Dragoons will be done as well.   Then it's either the Hussars or the cossacks, I am not sure which.

Anyway, here are the Orenberg Dragoons, after paint but before flock!  First, the full unit. 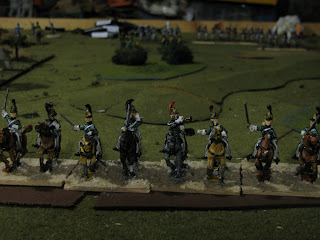 Then the CO, bugler and son to be standard bearer in close up. 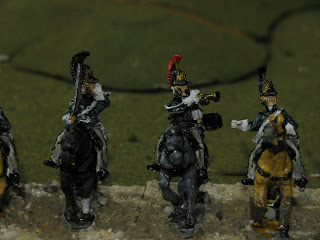 The Kourland Dragoons will look similar, just with more colorful facings.   Czar Barry will be happy,  more honest Russian horsemen to face the French next summer at Borodino.
Posted by pancerni at 10:23 PM 2 comments: