In a great game of IHMN with Greg as an opponent, I fielded the  Hellfire Club  company (vol. 2) against a Japanese (modified)  (vol 3) company. 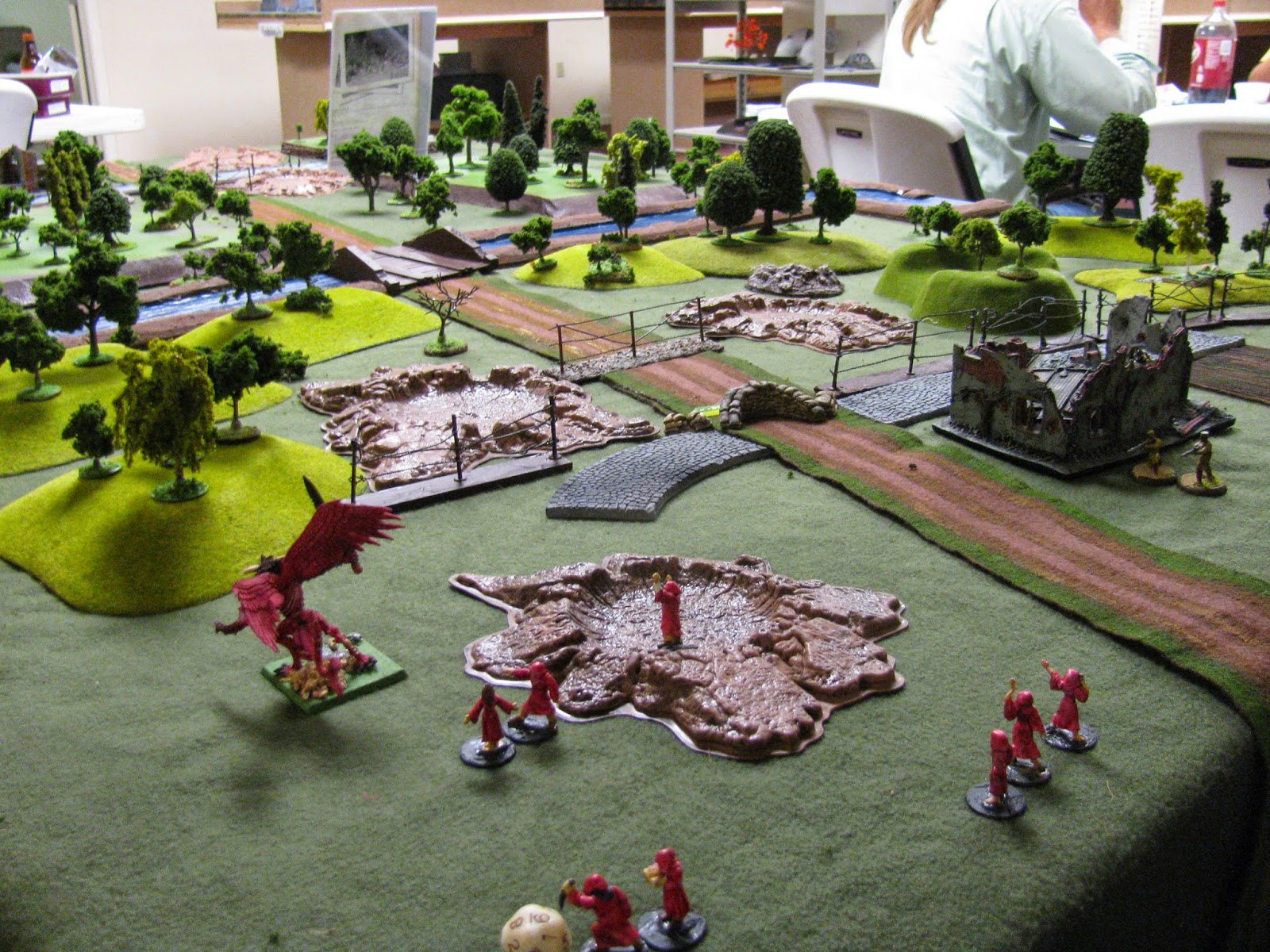 The table is set, the Japanese are attempting to keep the Hellfire Club from getting over the bridge.  The area in the foreground is subject to the 'death from above' in this "run for your lives" scenario. Here we can see the Hellfire club, in red robes and scales. In this shot the awaiting Japanese. 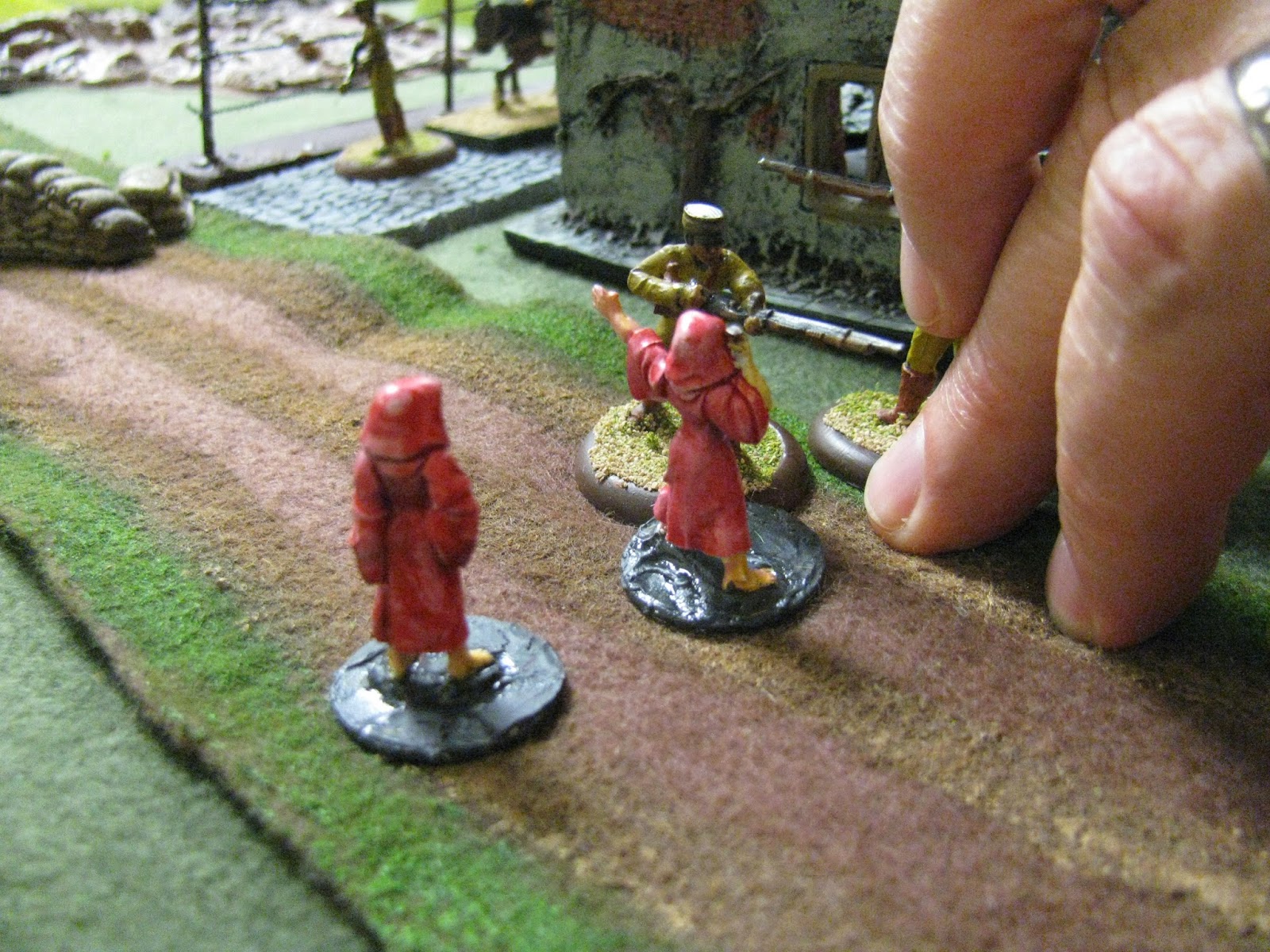 Quickly, for armed mostly with clubs and knives, the Hellfire Club's outer circle closes with the Japanese troops.  The hand of Greg is about to commit a second trooper.  To no avail. 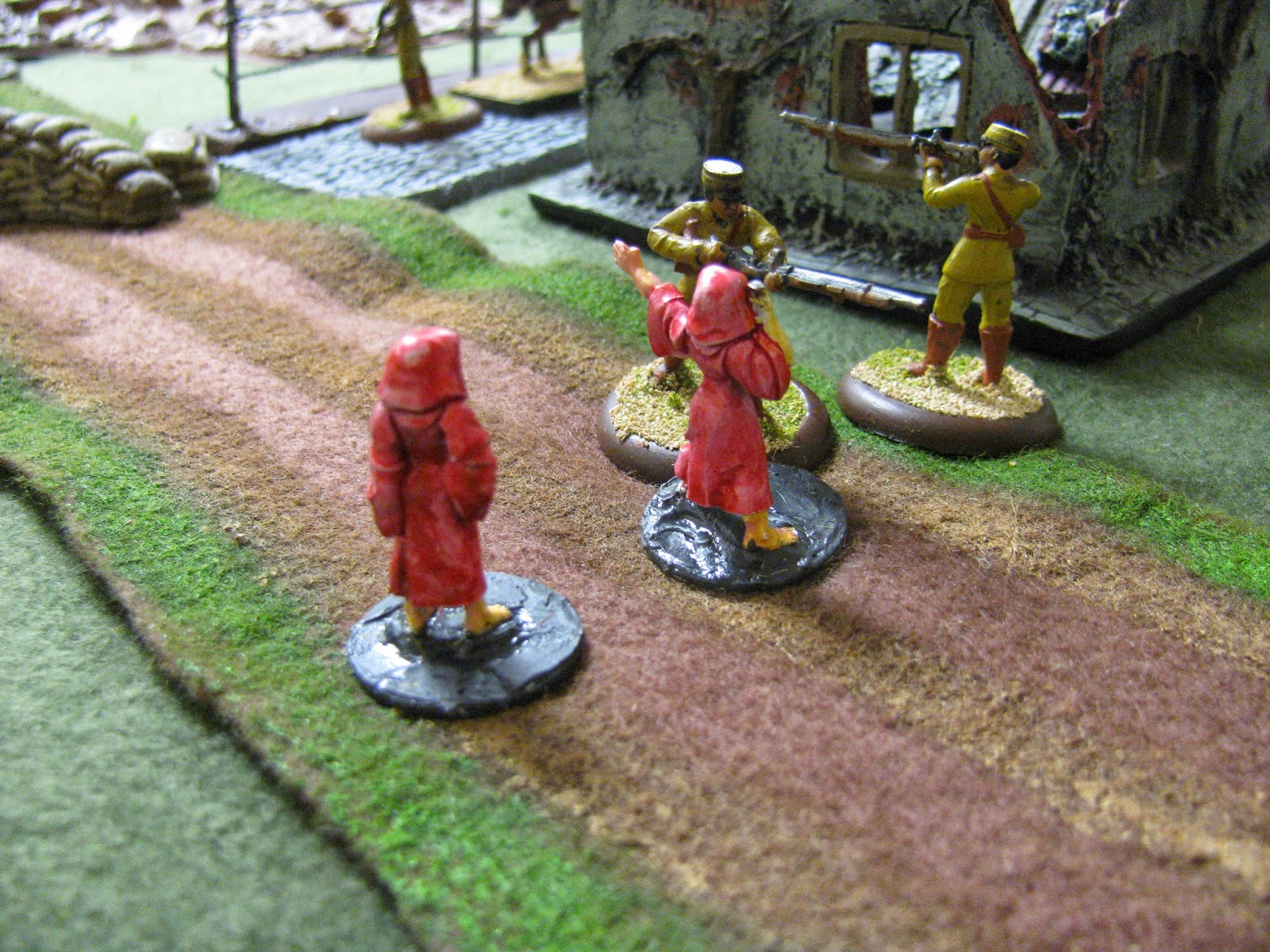 Uncharacteristic die rolling prevented the Sons of Nippon from making any appreciable knocking down  of the  outer circle acolytes. 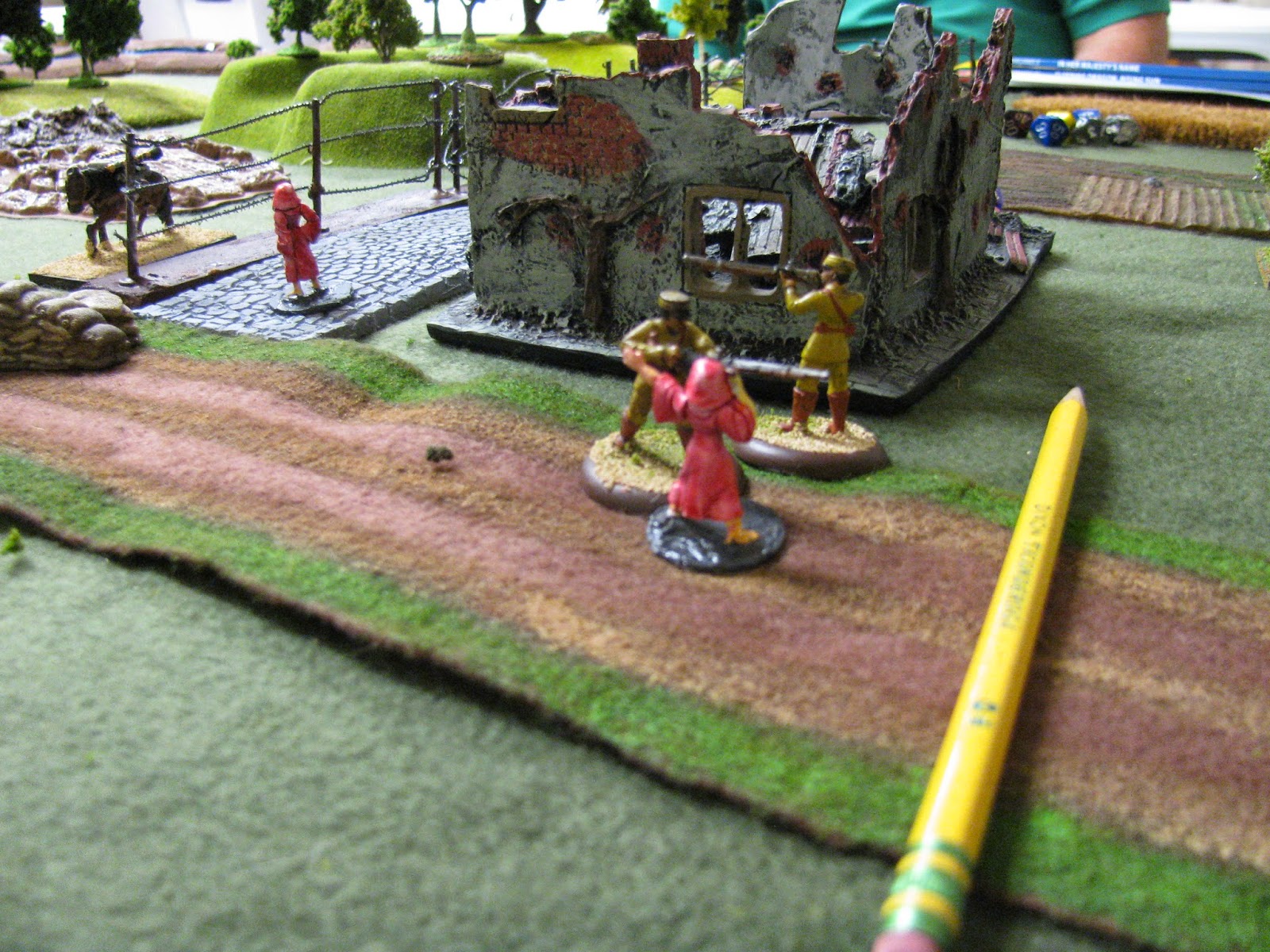 The edge of doom shown most brilliantly as a pencil. The forward most acolyte, Molly, was a veritable dervish, carving through Japanese soldiers with aplomb, a paring knife and incredible die rolls. 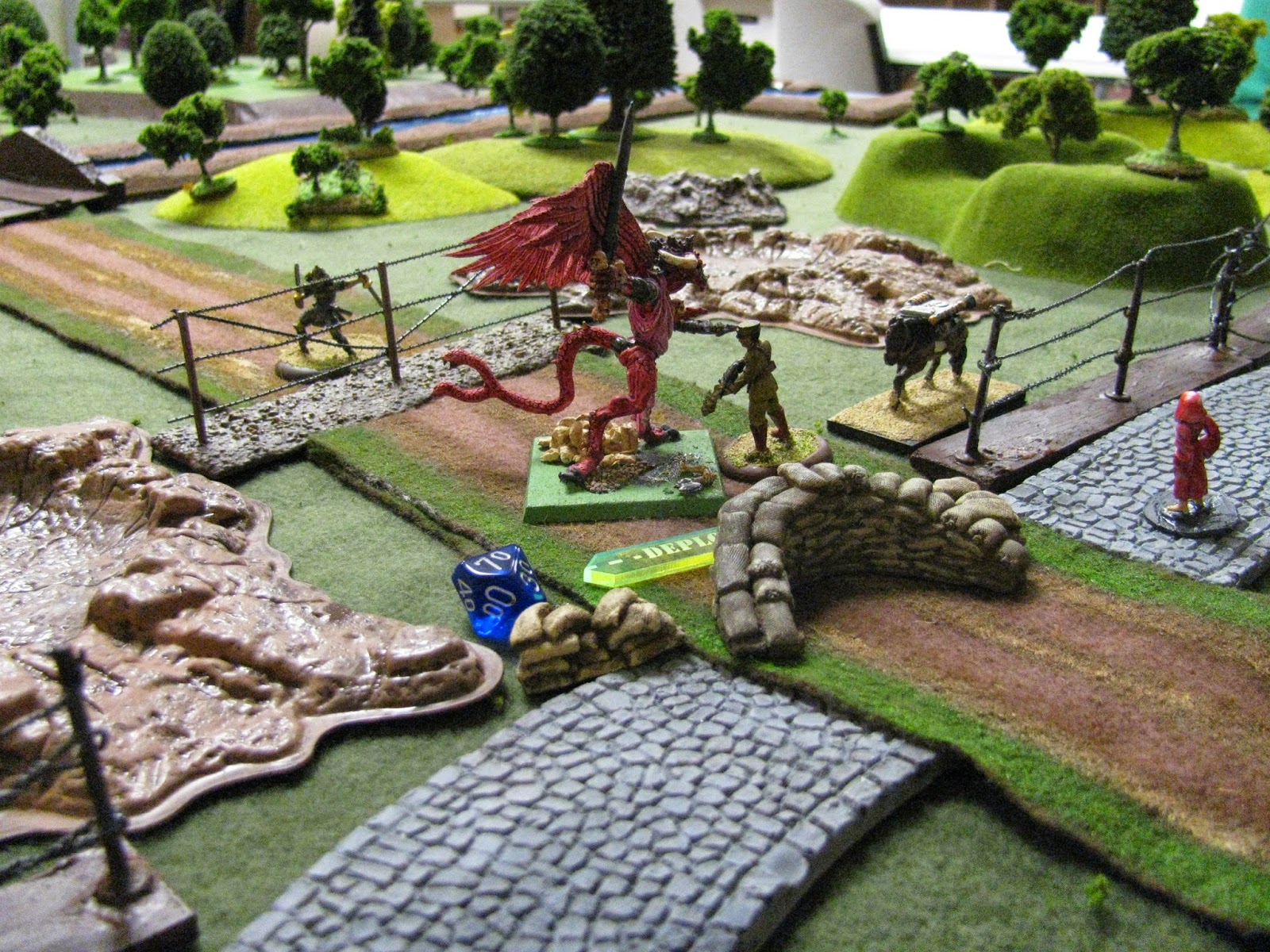 The big dude (the red monstrosity.) He did rather well, dispatching the special weapons carrier and the actual leader of the Japanese unit. 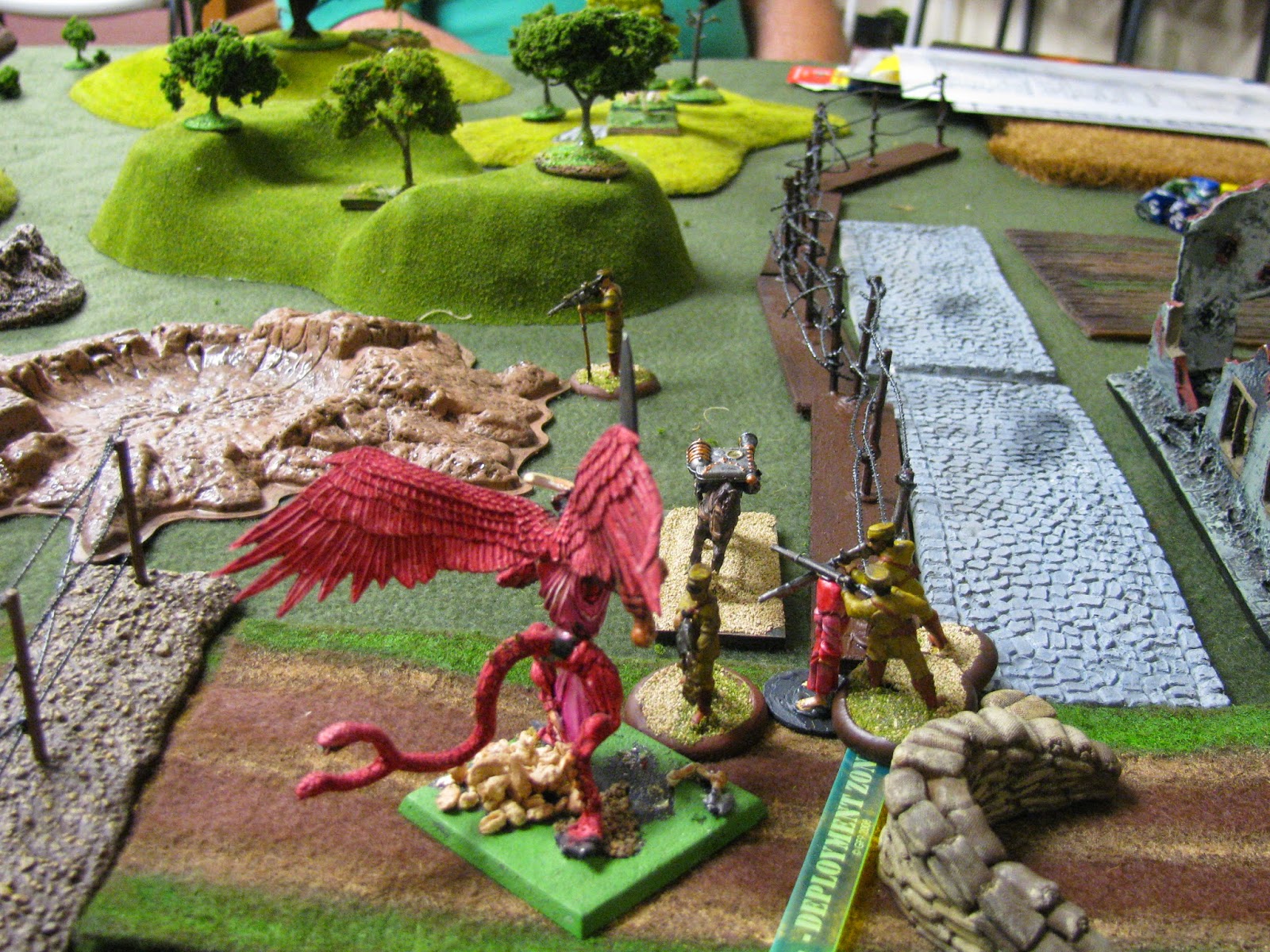 Final melee before the race off the board .  The first to cross was the greater demon, who made his pluck roll against the greater sigil of banishment (nasty piece of kit!).  The rest of his fight against the Japanese second in command was a draw. The leaders of the Hellfire Club got away, losing almost all their followers.  No surprise there!

The scenario is a great nailbiter, run too slow and get caught by the advancing line of doom.  Move too cleverly, worrying about always staying in cover can backfire.  Of course, this lets the opposing force get in some good licks as they retreat. Unless they are too slow to  avoid destruction as well. We will have to try this scenario again, with better special effects for the line of doom.
Posted by pancerni at 8:26 AM 3 comments: