Crossing Over (Here we go)

They came from the past, on the wormholes that connected incredible distances.  They blasted their way into star systems leaving unbelievable wreckage in their wake.  The attacks were powerful, reckless, without subtlety or mercy.

The Aquarians had heard of the attacks,  and were preparing their defenses.  The green skinned invaders would have to get past missiles and courage, scanner suite defenses and beams strong enough to make planets decompose.   At least that was the fervent hope of the Aquarian United Fleet.  So reinforcements of fighters, starbombers, destroyers and cruisers led by an attack carrier are rushing to meet the green skinned menace.

Monday Knights Productions sells the old Superior space craft line, 5 great fleets.  The Aquarians are the only fleet which does not have an official backstory.  Peter (see his Blunders on the Danube blog)  is a long time friend who hosted several epic games of star ship combat----twenty something years ago.  Time and other projects came round and the fleets at Pete's are back out patrolling.  I should have an Aquarian fleet in a week or so.  Peter's got some great background articles on some of the ships and photos of the models on his blog.

Gamesworkshop had/has (never can tell with them) a space fleet action based game. I have a Orc fleet from that game that is going into a wormhole to escape a foe (you can fill in who you want) and ends up in a different galaxy. At least, the stars aren't quite lined up on the star charts.  That way I have an in house enemy fleet, and two others only an hour's drive away.

More later.  I'll need to get the ships in to paint.   Maybe some pictures as well.

Who you gonna root for, the lost greenskins or the Aquarian home team?  Want to know more ?  Push the big red button and find out!
Posted by pancerni at 9:35 PM 7 comments: 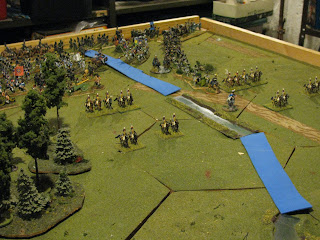 The battle is part of our map campaign where eight of us are sending units to fight various battles on a continent made from the WarPlan 5 by 5 mapcards.  Sadly out of print, the thirty double sided cards give a great deal of detail to fuss over while hatching plans of outsmarting the other players.  Just as in real wars, the plans don't last much past the first contact with the enemy.  Most of the country and unit names are inside jokes, so I've leave most of that stuff out.  My long time opponent Roger ably commanded the invaders, I took Ratlandian forces.

We use Les Grognards (Piquet supplement for Napoleonics) for most of our battles, it is easily adjusted for unique situations that pop up in campaigns.  We used card sequence decks for minor German states as a default, so there is no difference unless there are strategic, logistical or command quality differences.

Anyway, the scenario is that Ratlandia, invaded unjustly without provocation nor warning by two of the other player countries (yes, I rule Ratlandia), has had the Army of Ratlandia marching and fighting  for several weeks.  The generals include the Duke of the Western Marches, also known as the Black Duke.  The Army has successfully thrown over the forces of Benefice and has hurried to now face the invaders from the country of Fartengas.   The scenario reflected the strategic situation, with both commanders getting a conga line from off table to use in the battle.  A very different game from the normal "line up and go" deployment.

The sun was nigh up to two fingers over the horizon.  The road was flanked by two Ratlandia huzzar regiments, marching west to confront the invaders.  Behind the Hussars marched the grey clad Jagers, followed by the somber ranks of black clad troops of the Border Duke.  In the distance, the light cavalry of Fartengas advanced towards the Braun Farm.  In the distance, a faint drum tattoo came from behind the Fartengas signaling that infantry was not far behind. 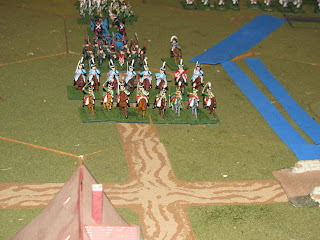 The cavalry brigade from Fartengas swung one right, one left around Farmer Braun's buildings, and promptly fell victim to a combination of canister and Hussar charges. After the first hour, the 4th and 5th Light Dragoons of Fartengas, bloodied and far fewer in number were streaming back on their supports. 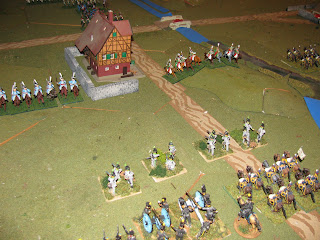 The Ratlandian forces, which look remarkably like 1815 Brunswick troops, set up an attack on the Braun Farm.  The Light Dragoons from Fartengas put up a gallant but futile advance.

Not documented as well was the struggle of two infantry brigades around the farm, where again the invaders were put to flight. 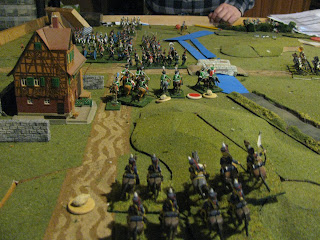 There are the invading Light Dragoons retreating!  Our boys in black are waving them on their way. 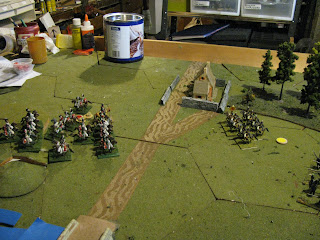 We use the metal coffee (left of center, rear of table) can to toss the used morale chips into as needed.  A satisfying clunk from each one.  The loss of morale, representing the ability of the army to stay on the field longer than the enemy, is crucial in winning in the rules.  Without morale, you can't rally troops, challenge the enemy's morale or prevent things from getting worse.  When troops rout, the sequence deck becomes less useful and things just generally shut down.

Shortly afterward, the Black Duke's reconnaissance spotted a ford in the Kuh River east of the Bridge. The Duke directed the Second Brigade to cross to flank.  They should have stayed on the south bank.  The Fartengas infantry and artillery proved to be made of sterner stuff, seeing off the Ratlandian First Horse artillery and taking revenge on the First Hussars.  The Fartengas Dragoon Brigade made a crossing at a lower ford, facing down the Second Brigade.

Despite being outnumbered three to one, the 2nd Ratlandian  Hussars saw off three invading Dragoon units.  Dice were very kind  to the Black Duke that day.

With the loss of most of his cavalry, the Fartengas commander sounded the retreat.  The second invading army has been thwarted and ejected from Ratlandia.  More action in other theaters later.

Well, been almost a month since the last post, but there has been a campaign map move to work through, two table top games based on the moves to play, and a little painting. I thought that the painting is the nicest way to start off February, as it shows the first of two items my daughter got me for Christmas (see the December 31 post, "My daughter is awesome.")

Any way, here is the Royal Artillery farrier wagon set from Perry miniatures as it will appear on my table.  It is painted using some Ceramcoat and Vallejo colors, as well as an acrylic tube Titanium White. The thumbnail sketch at the Perry website is very helpful in showing how to assemble the wagon.  It's a little diorama that fits on a four in diameter circle, mine's from a craft store, Michaels. 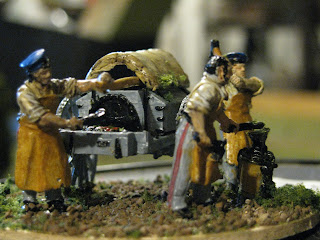 Side view. Really wonderful 28mm figures with a lot of animation.  The bellows handle actually has rope sculpted on it to connect to a bellows in the wagon,  real  attention to detail. 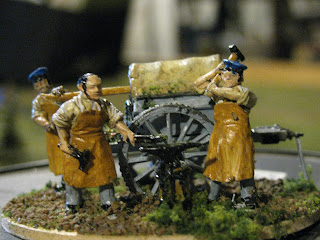 We play using Piquet's 'Field of Battle' or 'Le Grognards' and I am sure this will be  an  objective in the former and possibly an 'on field representation'' of an Army Characteristic card for the latter.

Hopefully  I'll get the Ammunition Wagon set done soon.   Then I really need to do the RA limber set her mom (not to be outdone) got me for my birthday.  Tough keeping up.  :-)
Posted by pancerni at 8:05 PM 2 comments: