Is July over already?

Well, it has been hot, and there is a lot of contracting work going on in a small remodel at our house.....

But we did manage a few games, actually varied from week to week. 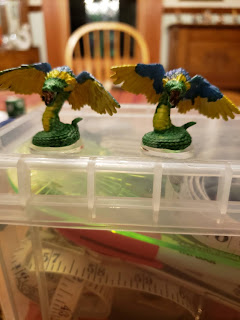 One of the weeks was a great bash of the intrepid party of five sleuths taking on a Mansions of Madness scenario from the Paths of the Serpent  supplement. I did the worst of the party, being almost dead and very insane as Mandrake the Magician but my friends and grand-daughters did stellar work and we solved the scenario in time to stop the jungle from overrunning the town of Arkham. 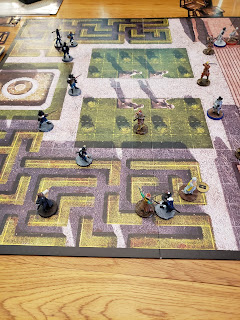 Just half the gameboard is shown in photo!
On a week of the old men only we ran a AD1666 scenario called Killer Party.We did run out of time, but we'd played it as big as you could, making the factions at 50 gold pieces in size. In English, each faction could field up to 12 characters. The courtesan did give up her letter, but it was dicey as to whether the King's Musketeers would be able to hold onto the packet as the Poles were all up in their face. 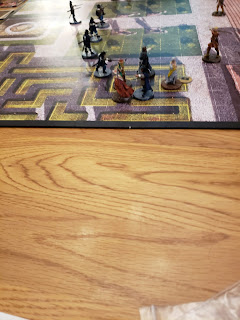 Board at game end.

Finally, last Friday was some work on the map campaign, it spawned an idea for a short mini tactical problem. More on that after a brief two week hiatus due to beach time and more fun with contractors.
Posted by pancerni at 5:18 PM 2 comments:

Sorry for the inconvenience, but there was a disgusting comment, obviously not from anyone who would actually read this blog.  No one needs such garbage.