Recent painted items include some additions to the supply train and a limber for the Royal Horse artillery batteries.  The drivers, wearing a simplified version of the RHA uniform, were fun to paint.  The model, from the Perry Miniatures British Napoleonic range, was a gift from my long suffering  wife.   Just about all craft paints, from Delta Ceramcoat to Apple Barrel were used to paint the crew and wagon. 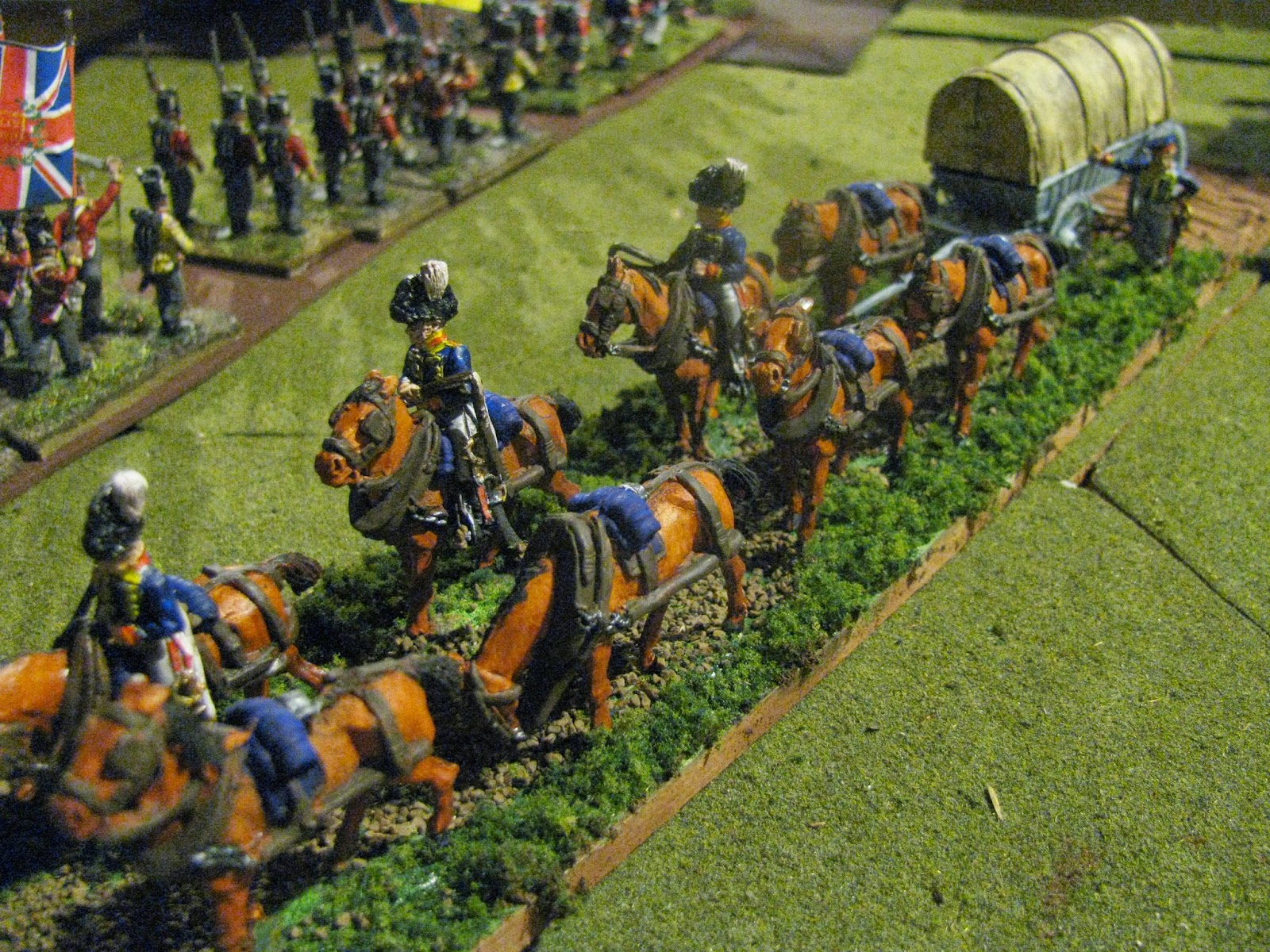 The supply wagon in all its glory. 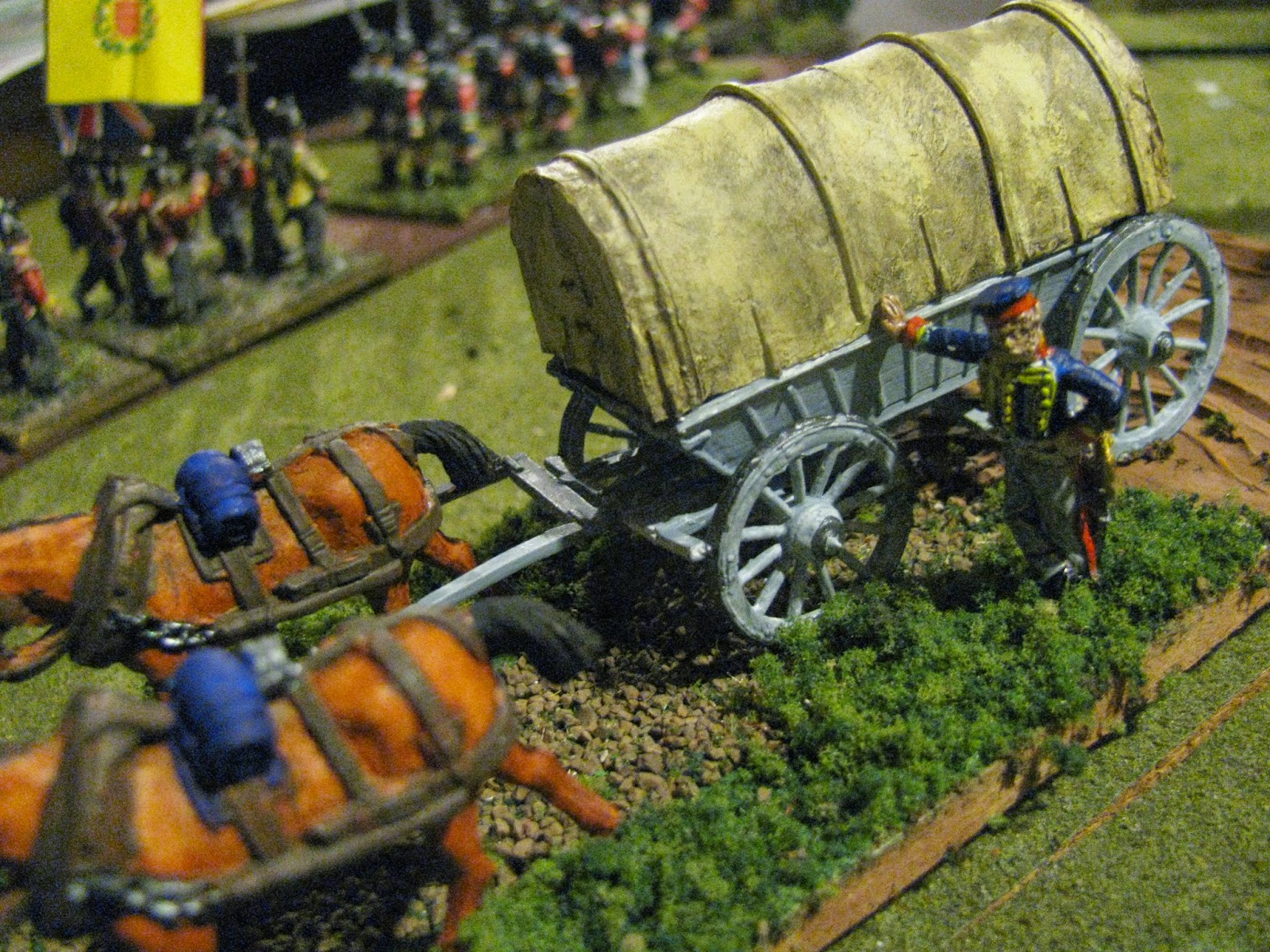 Close up of the wagon and the animated attendant. 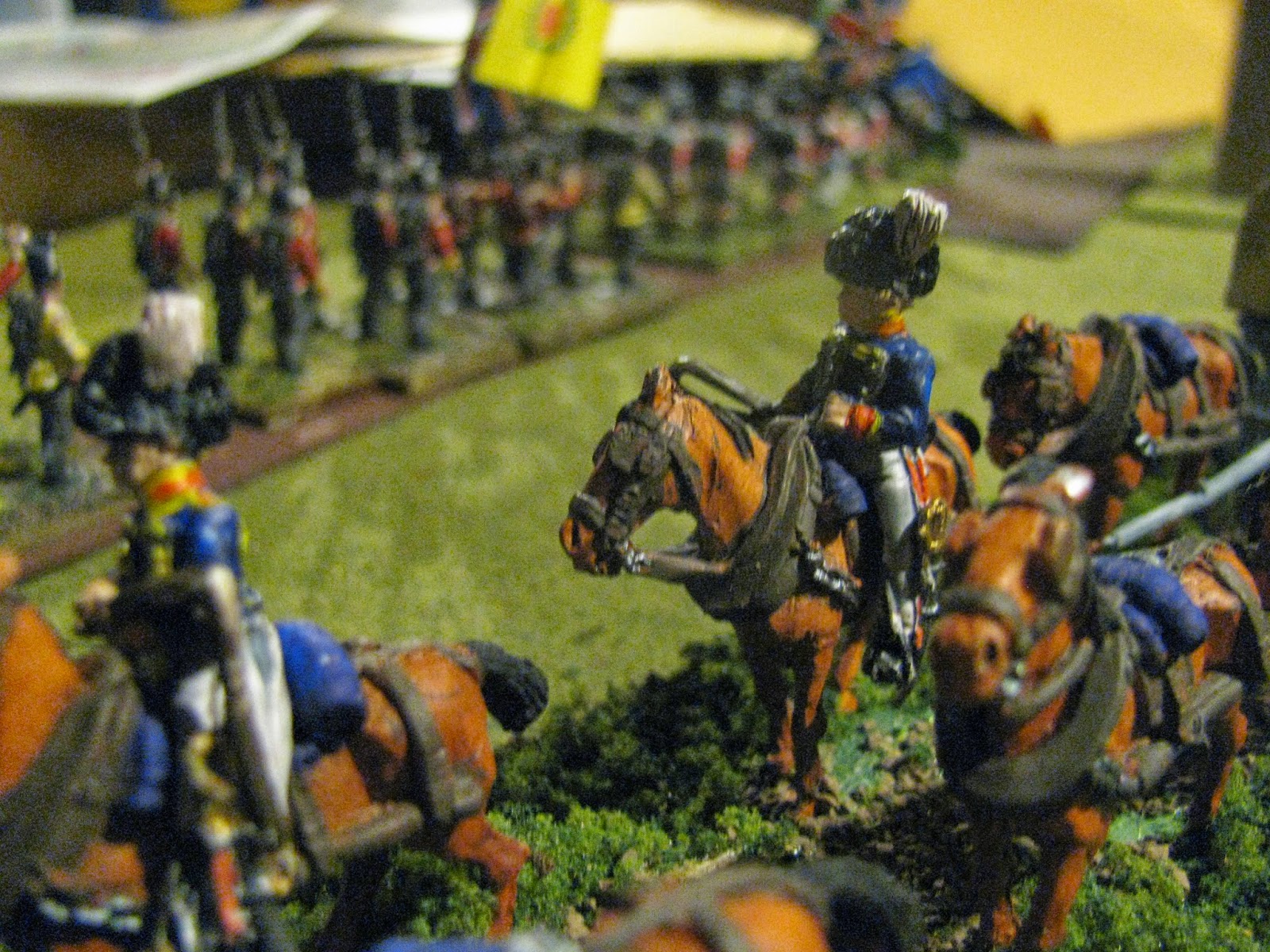 Detail of the drivers.

RHA Limber
The limber continues my attempt to show at least one limber per artillery type on the tabletop.  No wondering whether the battery is ready for action or limbered for movement.  The set is again from the Perry brothers' British Napoleonic line.  One of my favorite uniforms to paint.  Certainly not the fastest! 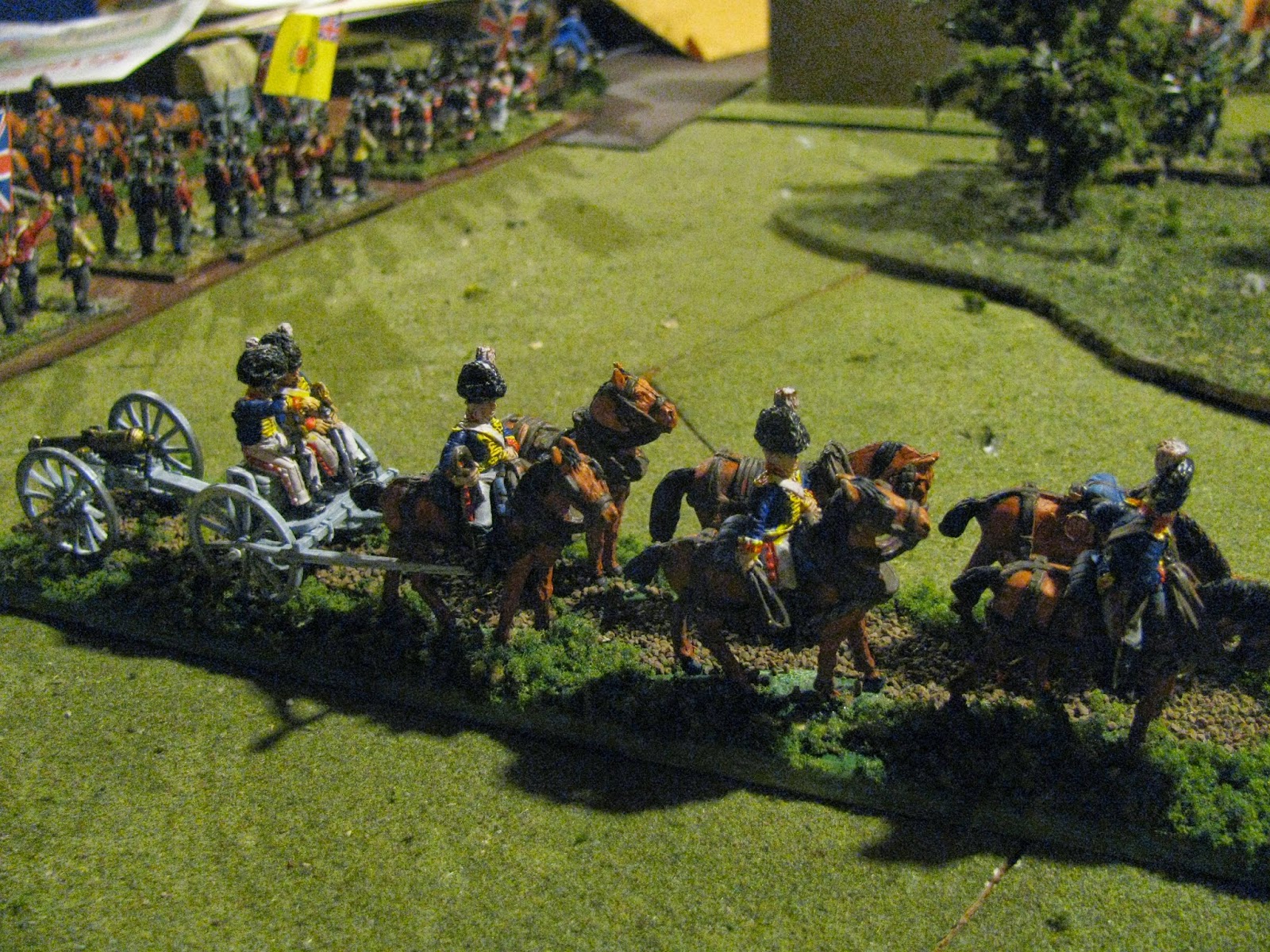 Shot without the flash. 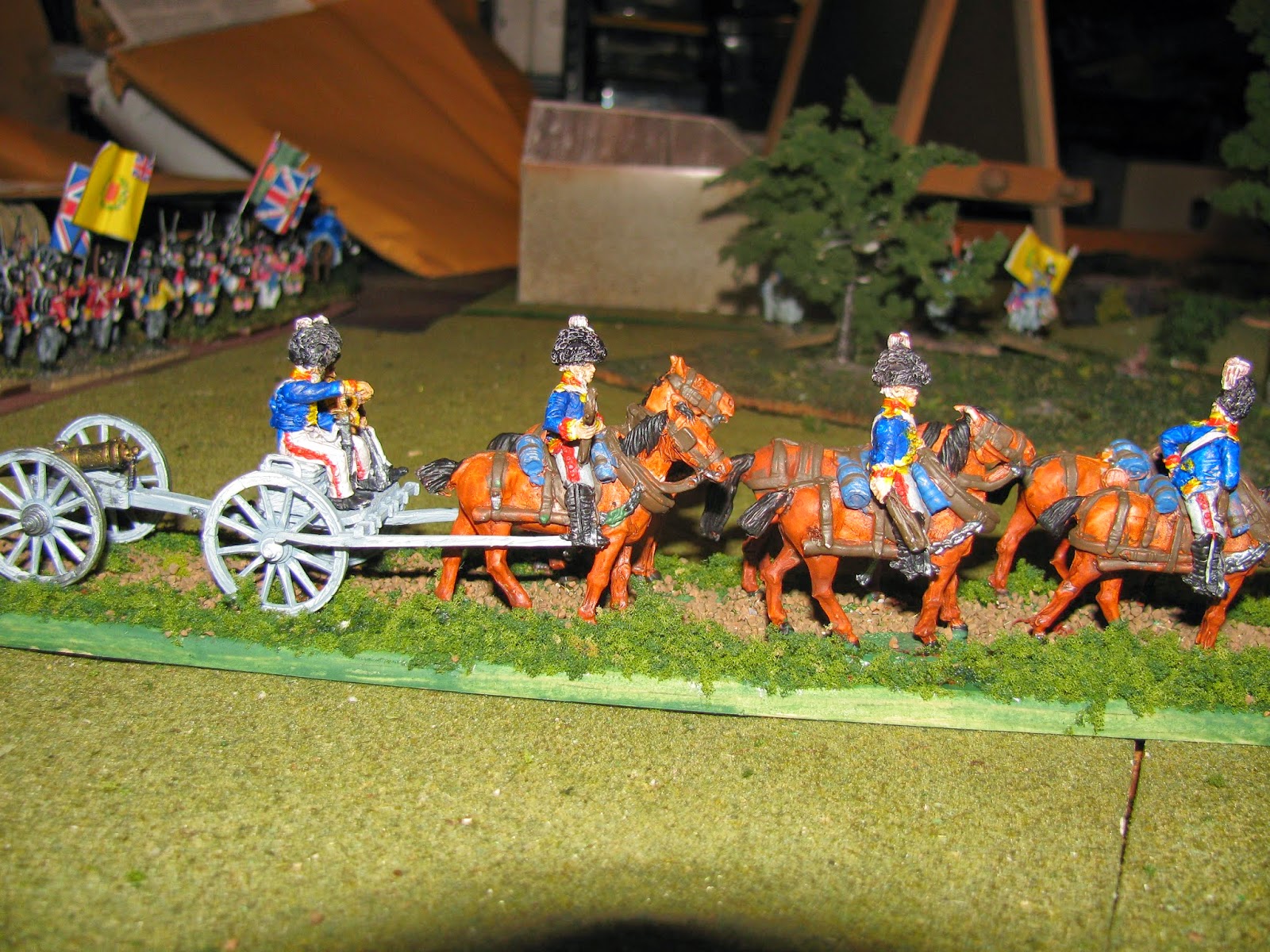 Shot with flash...washes out some of the color. 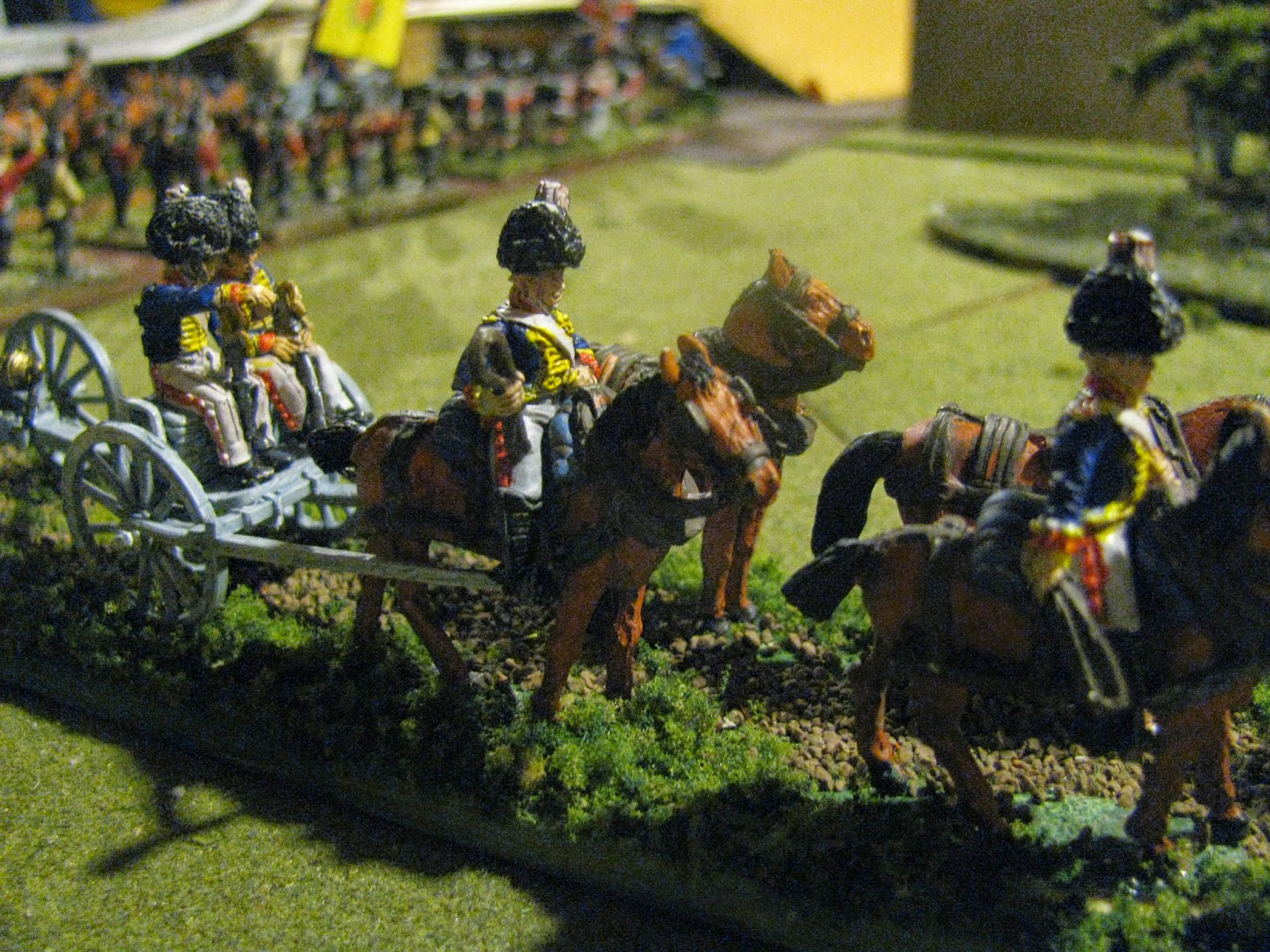 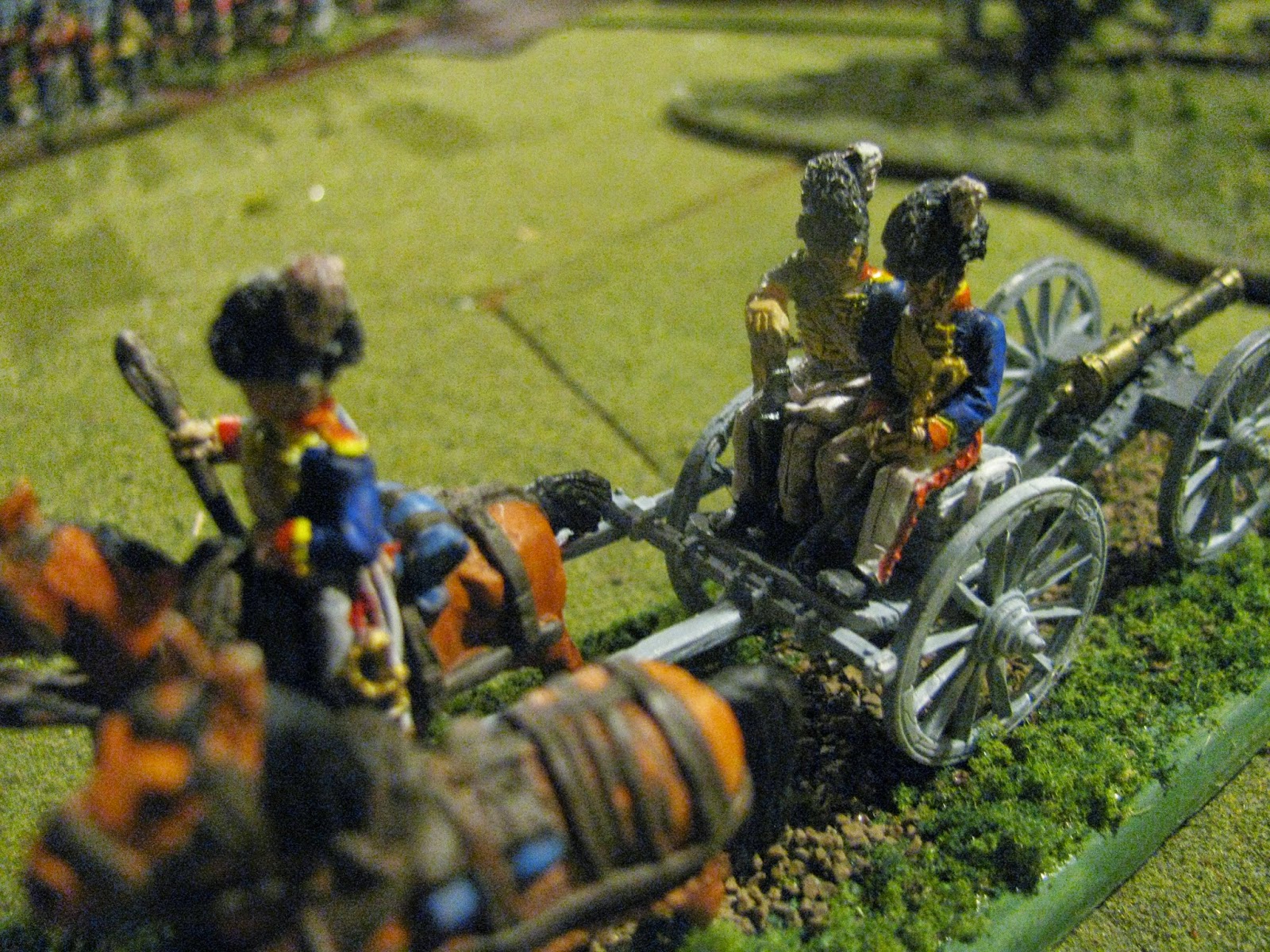 Final shot. Great detail on the limber itself.

More next time.  Maybe something different.
Posted by pancerni at 7:55 PM 4 comments:


In late February we started looking for a good weekend to play, luckily one appeared three or so weeks out that worked for both of us. Barry Frandsen agreed to debut his Hungarians, based on the 16th Century, against my Ottomans from the same period. Barry related it had been a good five years for him since he played BoB; it had been 2 years for me….and longer since the Ottomans had been on the table.  With the three week interval, we both had a chance to read the rules through again, which is good to reacquaint with the rule mechanics.

A very little about the rules:
Piquet is the ‘bones’ of Band of Brothers (BOB).  The supplement makes a few changes to the card definitions, adds a matrix showing what is required before certain categories of troops can melee.  There are also a few tweaks to the melee rules which help to reflect special units and period practices.   The opposed die rolls, impetus swings and ‘opportunity pips’ mechanics remain in the rules.  As  always, players can have the individual mechanics modified  to suit tastes…..more on that later.
I am partial to the rules in this set because of the ability to reflect the strengths and weaknesses of various armies in the period within a framework of rules without resorting to a lot of ‘special’ or “one off” rules.   The flexibility for this does come at a price, the set up time for a game, at least in the building up of a force requires some time and a passing knowledge of the period to get a force to look and feel like a representative force from the period.
Because of the lack of formal lists and set up work, the lack of a fixed turn sequence and a certain amout of randomization in how events occur, the rules are not everyone’s cup of tea.  For anyone interested in looking further, there is a very helpful yahoo group, just search under ‘Piquet’ to find.

Getting Ready
Due to the size and configuration of the armies… 20 to 24 units, with lots of cavalry, I did clear of the entire 8 feet  of the table in the ‘Cellar of Doom’ and set out a rolling landscape to evoke the plains of Hungary, a likely place or the foes to meet. 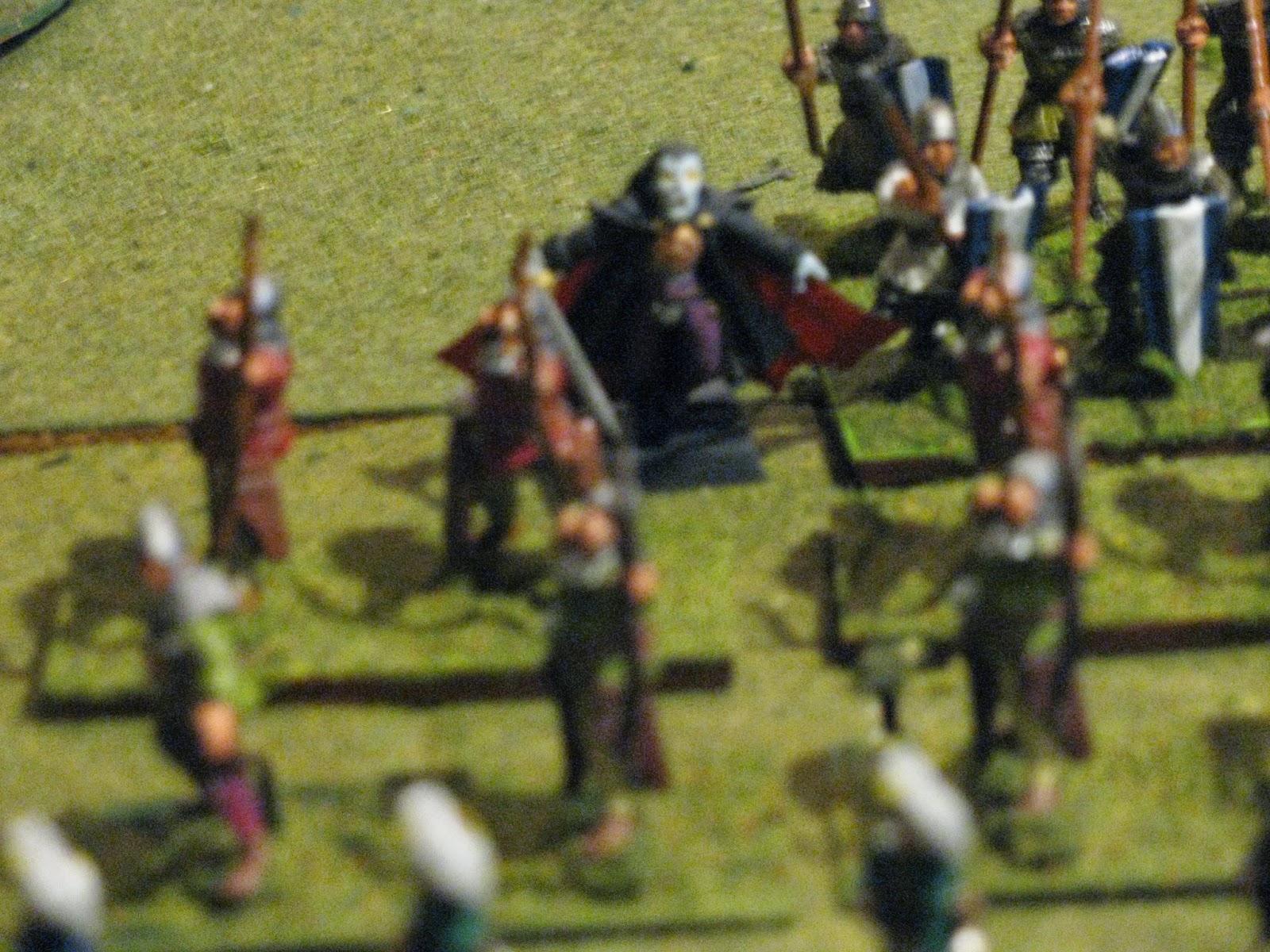 Does Barry know something I don't know about one of his commanders?

The table allowed us to deploy the armies as’ deep’ or ‘thin’ as wanted.  A typical unit requires four to eight inches of frontage, depending on the formation (I neglected to mention, the scale of the figures is 28mm) which means at least some unit are in a second line.  Since I was host and had dressed the table, I offered Barry his choice of sides and or to add or remove terrain as he chose.  Barry chose to accept the terrain as give, brave fellow!

In the box with the Jager Corps and gun crew, was something extra.   A pack of the British field surgeon and helpers.  Thank you, Westfalia, for the additional treat! 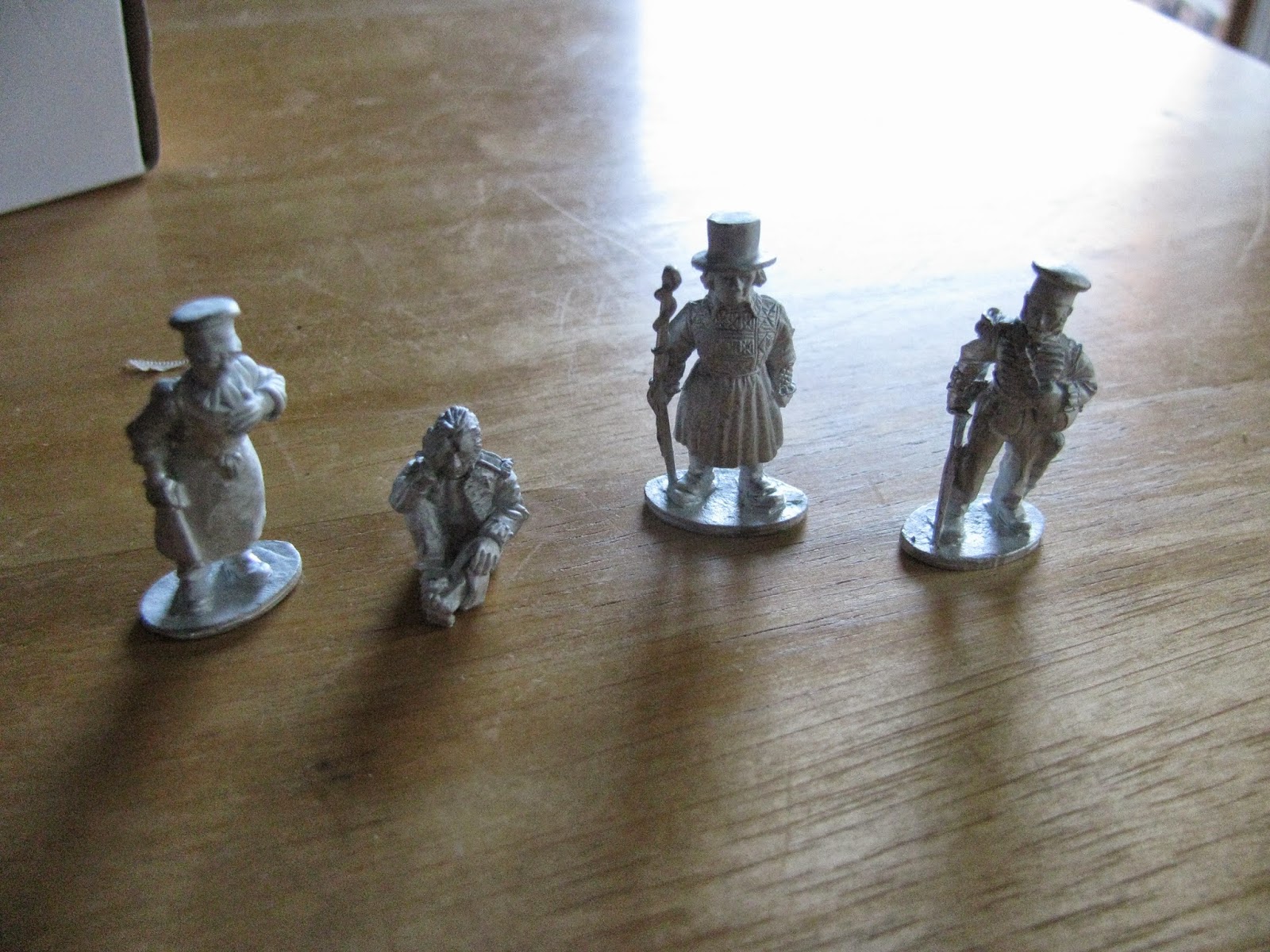 The four castings as a group. 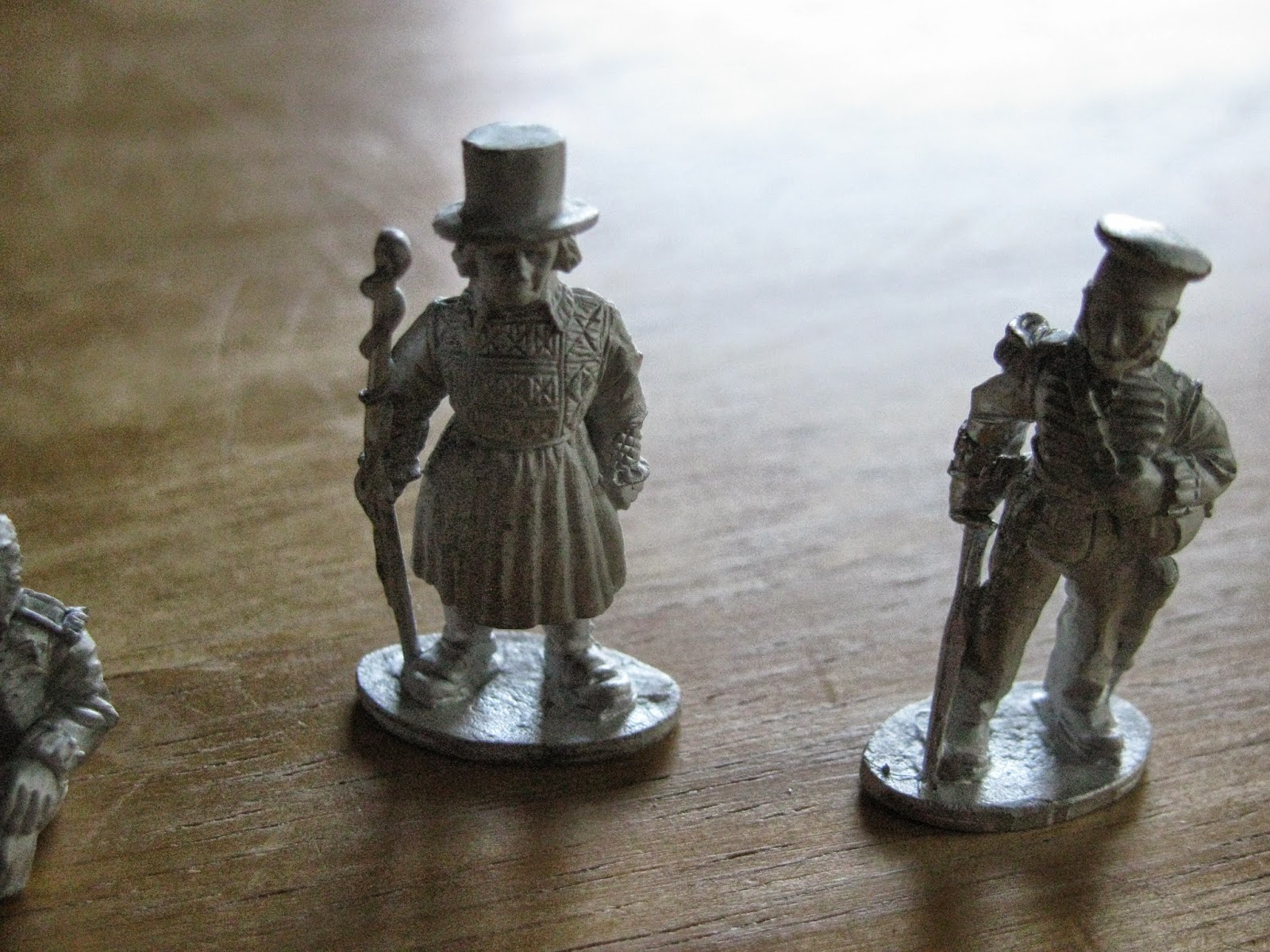 The detail on the left hand figure is simply amazing.  Bad lighting makes a bad photo. 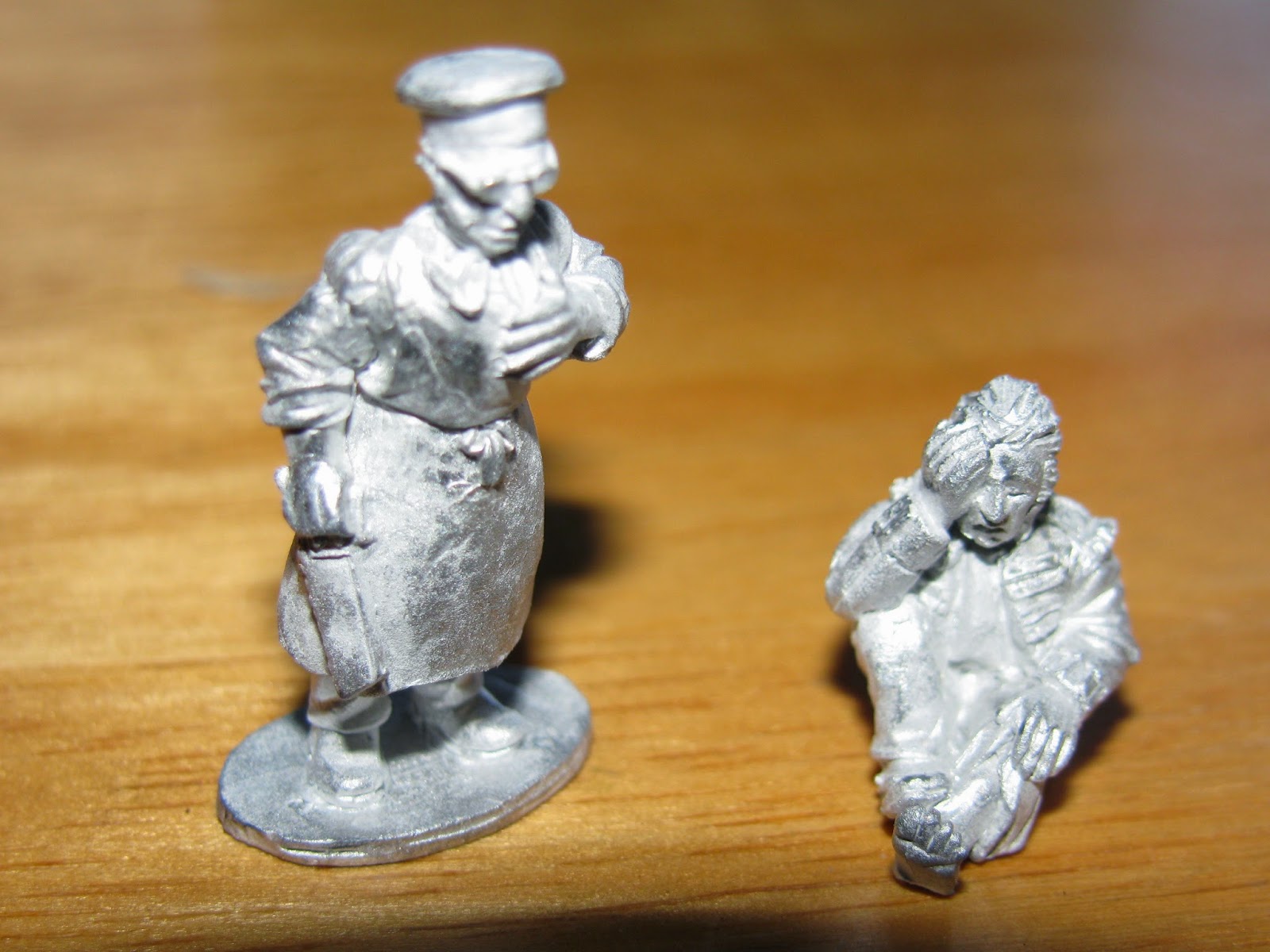 The wounded figure and one surgeon ready to hack.

Had to get these .... artillery for the Kielmansegge Freikorps

Well, Kielmansegge's Jager Corps at some time in its existence had a one pounder canon attached, served by crew from the Jager's ranks.

Now that just means if it's made (and it is, thanks to the good folk of Westfalia Miniatures)  I must include it into the unit. 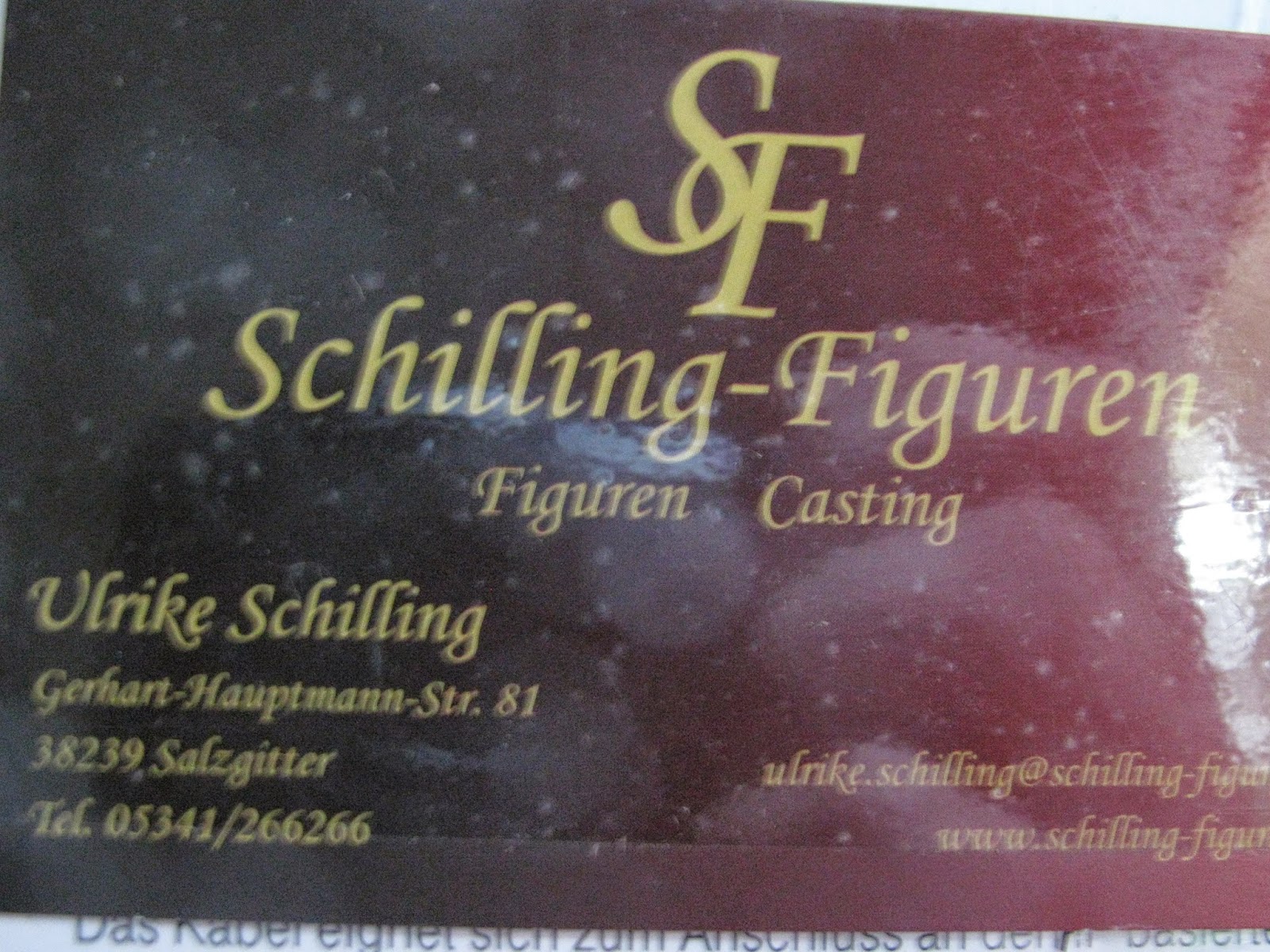 The packaging came through with a business card...clever marketing, eh? 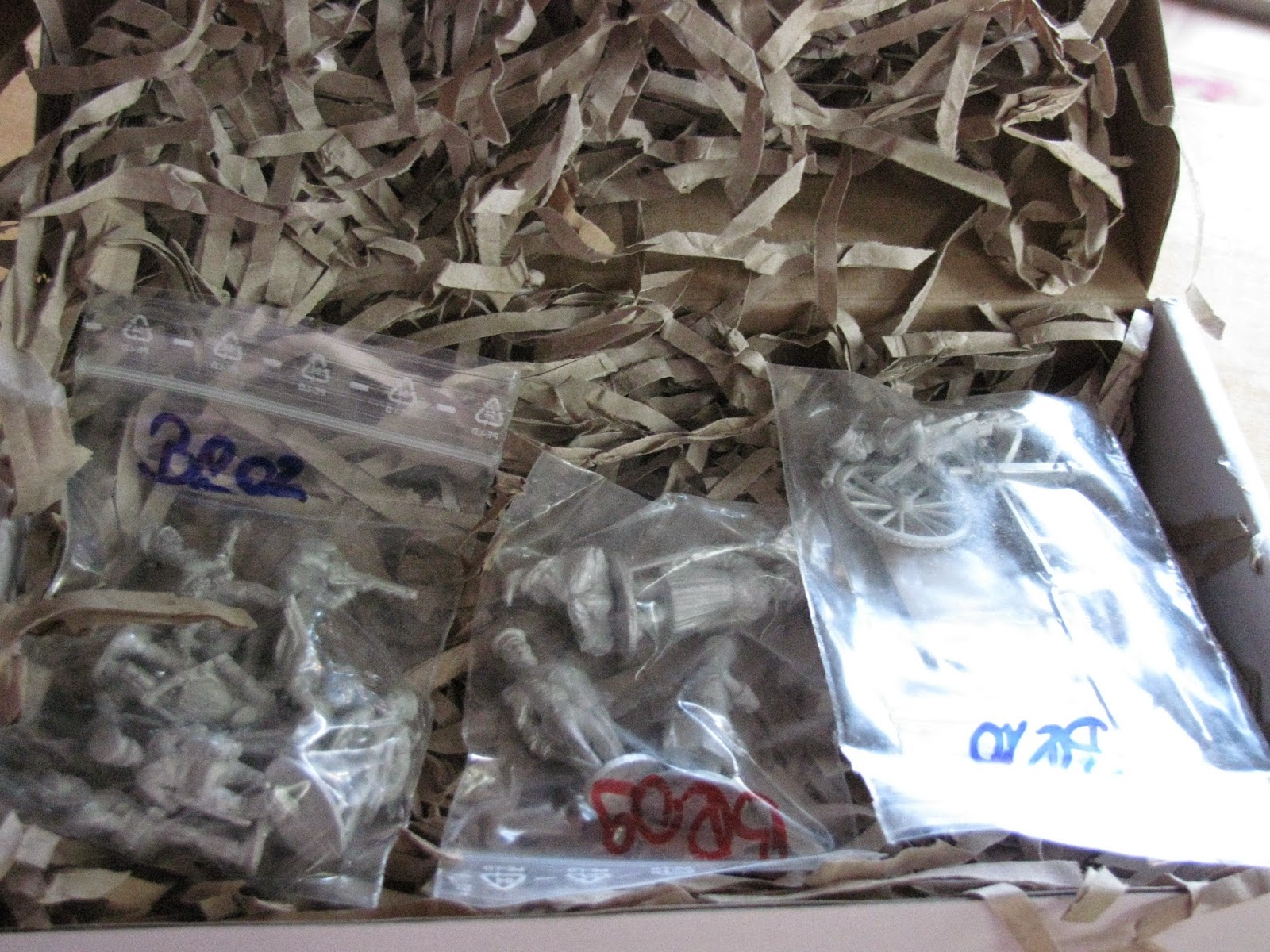 Very carefully packed, as you can see. 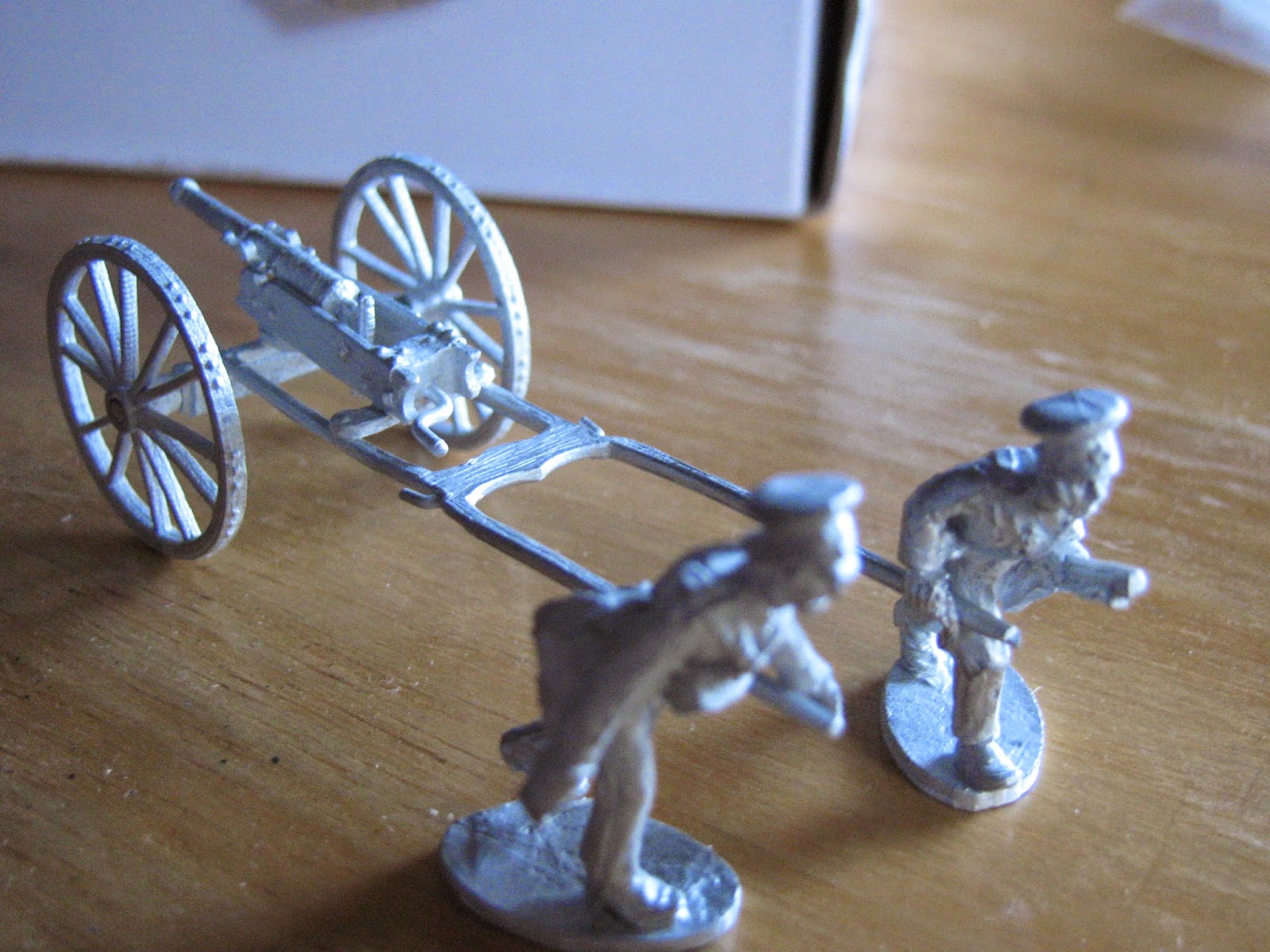 One view of the crew after priming. No flash to speak of on these very clean castings. 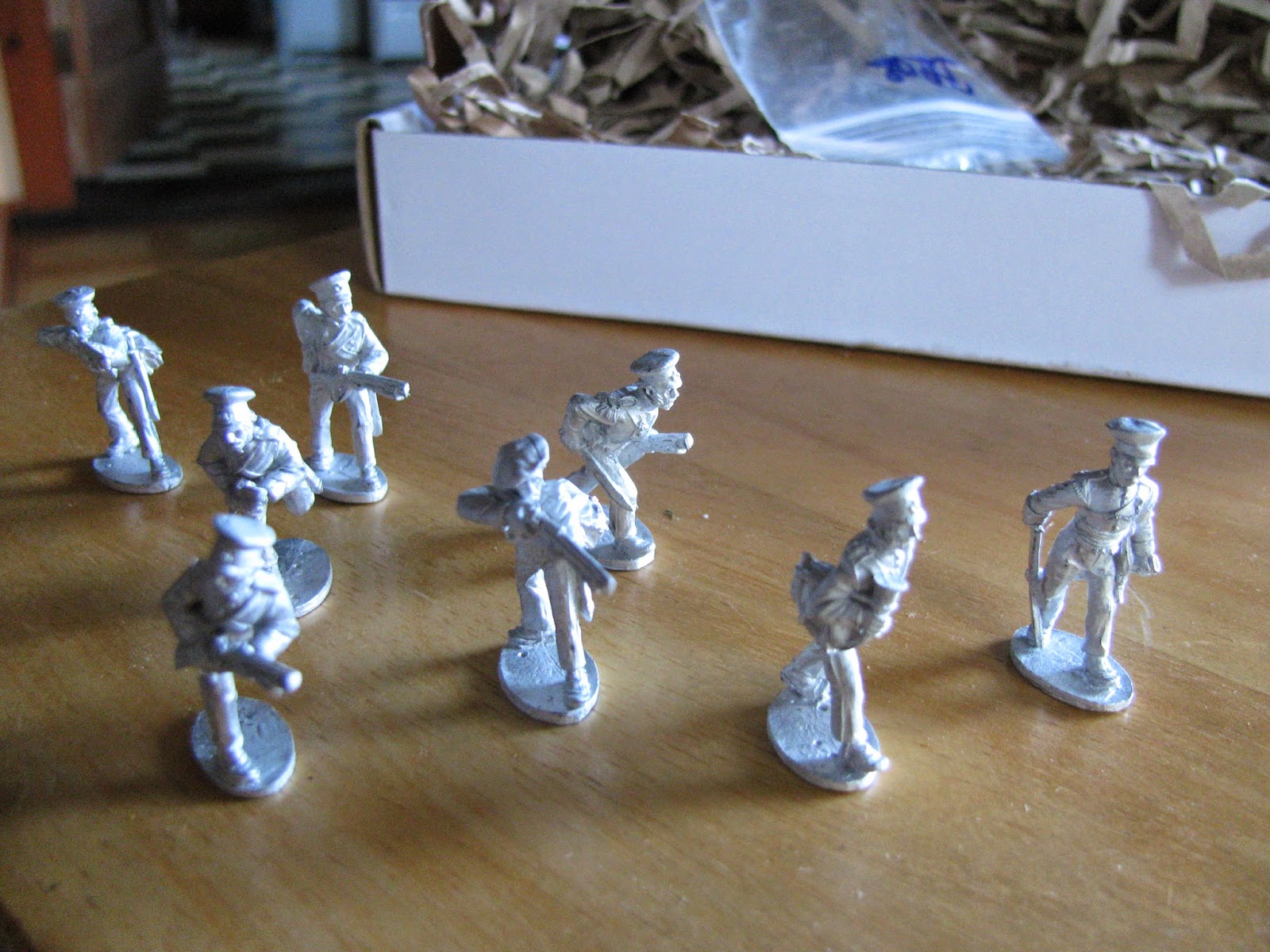 I did take the opportunity to double the number of Jager castings I have.  These will mount on washers to use in skirmish games. 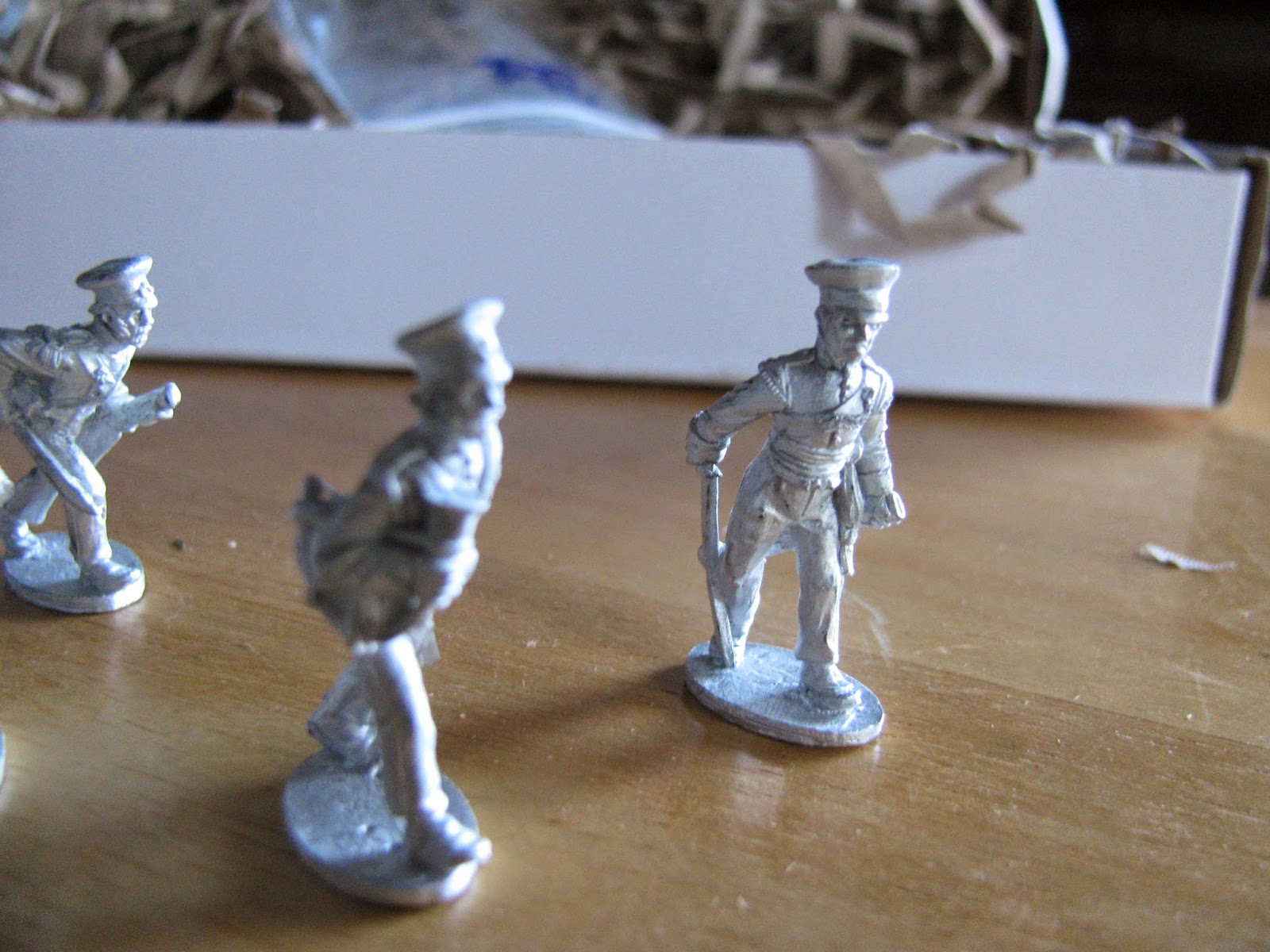 Such nice figures.  I will paint them up soon. 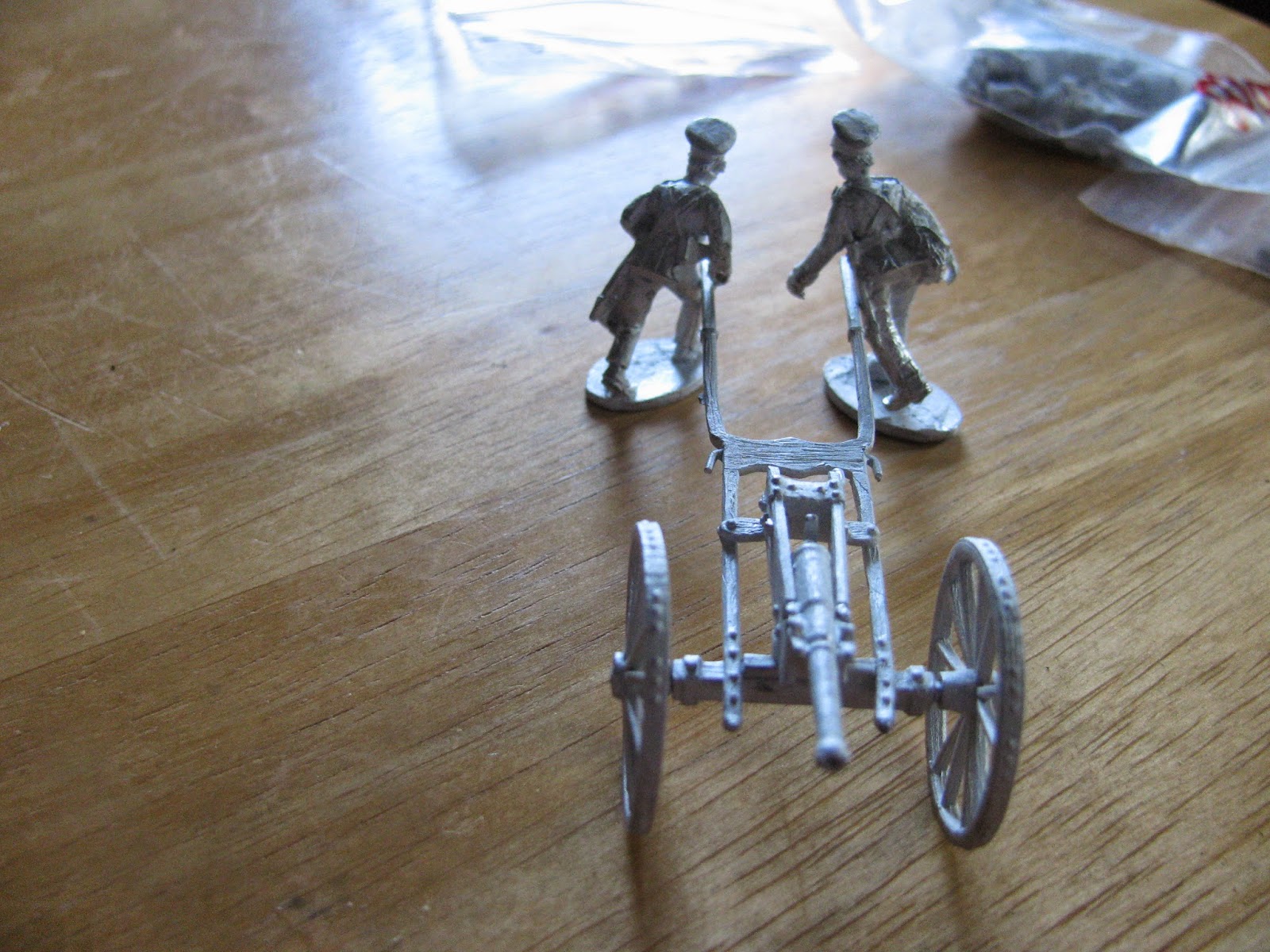 There is actually more detail in the kit than I am showing.  Pull ropes are included. Hmmm, how to base these?