Coming down to the the last few units of the Quatre Bras Anglo-Dutch forces.  The final of the five units in Kielmansegge's Brigade is the Luneberg field battalion.

Great little unit, again the Perry's did a marvelous job in covering some variation in the uniform, albeit mostly the headgear.  I chose to be closer to 1815 than 1813 in the sash colors...if you prefer the earlier version use red instead of gold on the officers. 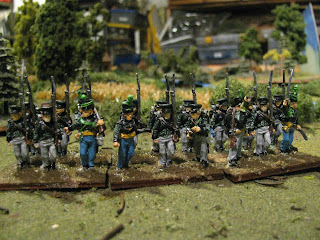 Unit details include a variety of head wear, the officer's lace/braid and continued use of the blue pants from the origination as a light unit. 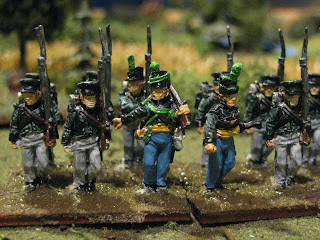 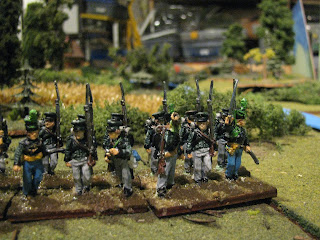 Here is a  photos of the assembled brigade...although I still need a commander figure to represent Kielmansegge himself. 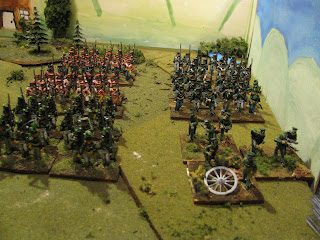 I don't know what he (Kielmansegge) wore at Q-B, someone on the Miniatures page suggested the mounted rifle brigade officer from a Perry command pack.  I think I will use the figure, it has a lot of character.

A few stands added to increase the units' size

Since it appears that locally eighteen has become  the new twelve, I have painted a few extra figures for a unit of Dutch Belgian militia and some Hanoverian Verden Militia Battalion.  And you all thought I'd stopped painting!  It's been busier on the yard, social obligation and work calendars lately but it's mostly been basing and photographing that's fallen behind.

Anyway, here is a couple shots of some newly painted castings:

These Dutch Belgian Militia are to fill in units to recreate of the brigades in Chasse's Division.  Although not at Quatre Bras, it is this division that sent troops to help throw back the attack of the French guard at Waterloo.  But mainly I got a deal on some Dutch line unit castings, the brigade involved could be made by the line units and some judicious juggling of figures I already had in my Q-B project. 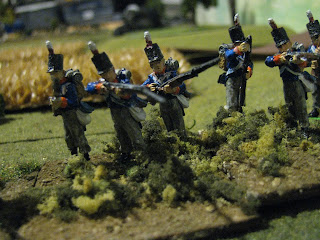 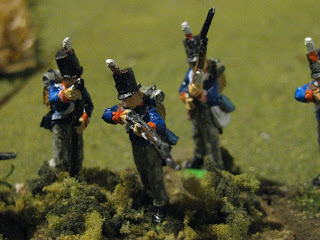 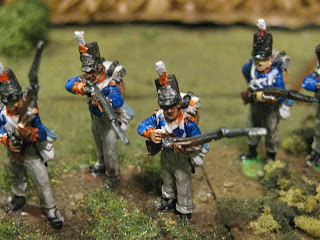 The Hanoverians are simply to increase a unit I finished earlier this year at a strength of 12 castings.  The extras brings the unit in line with the rest of the units that will be in Best's Brigade on the table. Here's the entire unit, ready to go! 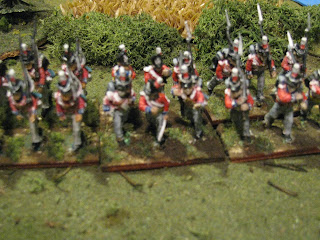 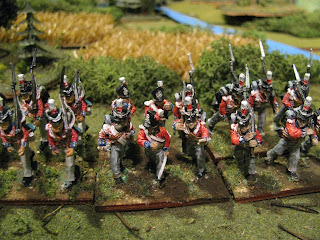 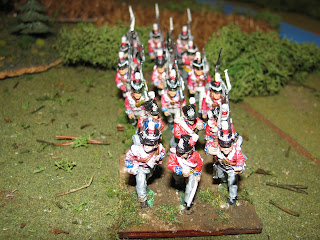 This leaves the Luneberg field battalion, two more Hanoverian militia battalions, and some artillery to complete the Anglo-Dutch forces, prior to the British Guard Brigade showing up, at Quatre Bras.  Of course, I could do those units as well. So many toys, so little time.

WW2, and a return to an old friend

My long time gaming friend wanted to revisit the venerable Bathtub Barbarossa campaign we played back in the nineties.  We got the booklet out...it's out of print but you can usually find a copy on ebay. Or so I am told.   We thought it would be neat to try the 'new' Command Decision Test of Battle out in the framework of the campaign.

We had tackled the project in the late 1990's and played WW2 in HO/20mm scale just about once a week for a couple years, actually getting through three of the strategic turns over the entire theater before we ran out of steam.  We decided after some reminiscing that we'd try  a scaled down version this time, working the attacks north from near the Baltic sea to the Pripyet marshes.

I am taking the part of the Soviet, Roger the Germans and their allied forces.   We finished the fourth game generated from the map move.  Here are some game photos. 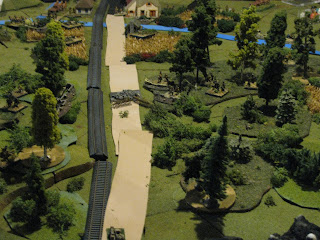 Scene 1  I am looking at the German approach, with Soviet troops dug in left and right of the road near the road crater.  The objective for the Germans, the town of Kaunus, is in the distance. More of the German right flank. Roger ignored the possibly easier side of the board to bull his way down the road..thereby neutralizing one of my 'clever' traps. 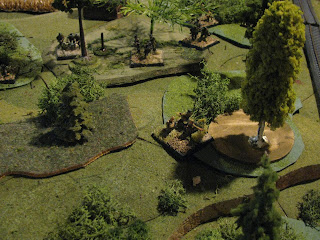 Scene 2  Just north of the road in the previous photos, a Soviet recon SMG force and portions of a rifle battalion can be seen deployed in the heavy woods. 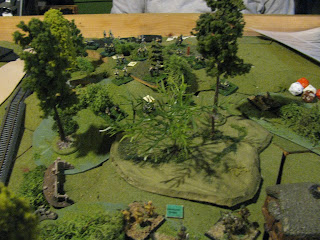 Scene 2, just south of the approach road.  Another rifle battalion dug in to stop the invader! Scene 3,  the northern battalion retreating out of the woods, the delay they were assigned  being completed.  Okay, I pulled them out rather than get cutoff. 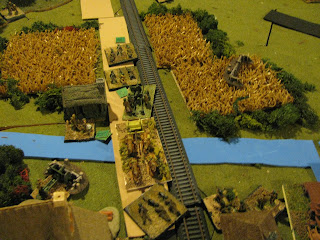 This last photo shows the antitank battalion in the rifle brigade tactically withdrawing across the bridge to pass through Kaunus.

Despite a spirited defense, the 10th Rifle Brigade will probably retreat as the road out of Kaunus to the North has been compromised by an earlier battle.

Don't worry about the Napoleonics, I'll have some new units up shortly.
Posted by pancerni at 3:40 PM 5 comments: