Finishing what I started: Map on garden cloth.

I did not make it to Ellis Con this year, real life got in the way.   Things have straightened themselves out somewhat, so I went down into the cellar and completed the game cloth for the  Snappy Nappy scenario map.  I am pleased with the final result.  Here is the photo, complete as it would have made its appearance. 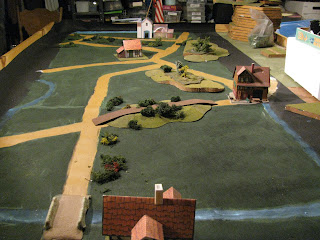 A little shot of the 'farther end' of the table.  The road net and rivers 'drop off' where the map ended. The mat was to represent map 'C" in the campaign.  You can see all the maps on Gonsalvo's blog if you were to go here  http://blundersonthedanube.blogspot.com/2012/11/crisis-on-danube-1809-with-snappy-nappy.html
and scroll down until you find map 'C.' 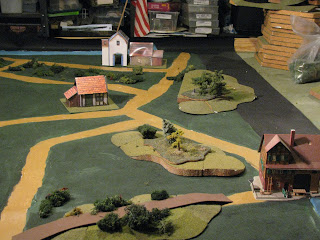 Some of you might observe the GeoHex  being used as hills and also the stack to the right rear of the photo.  Why do the mat if I already have the GeoHex?  Well, the mat will roll up and later roll out flat. The mat takes up so little room, only the 4 foot length is something you have to consider when storing for later use or transit.  The GeoHex is wonderful stuff, but like any foam based product, is bulky.  Since I have switched over to a smaller car, room for transport will be at a premium.

Also, at a convention or even at an away game at the local hobby store, the set up time for traditional hill and road/river gear is measured by thirty minute increments.  GeoHex increases the time by at least 30 minutes.  The mat rolls out in under one minute.  Now the hills, trees, man made structures and shrubbery are all that remain to be placed....and the mat can be marked for those items.  I left 'voids' or unpainted surfaces to place the buildings on this mat.

When I do the next one...and I must say, these mats will improve the set up time immensely, I will use some sort of cheap white paint as a primer.  The black plastic acted practically as a sponge on the craft paints, the interior house paint and the gesso!  The gesso did leave behind a nice 'texture' for the road, so that will also be included next time.

The final nice part about this "map" is that I can flip it over and start a different map on the 'B" side. Did I mention it's cheap?

Maybe I'll play a solo game on the mat this week.
Posted by pancerni at 9:09 AM 4 comments:

The last of the Dutch Belgian units at Quatre Bras on my list were the light cavalry commanded by General Merlen.

There was very little cavalry for the allies at Quatre Bras, but the timing of the first cavalry units' arrival was fortunate for the hard pressed Dutch Belgian foot units.  Merlen's brigade of light cavalry came just before Pack's infantry division, and Merlen was instructed to take off the pressure on the infantry.  Pack's brigade needed time to deploy its brigades. and a series of charges made by the light dragoons and hussars of Merlen's brigade bought that time, although at a high cost.

We start with the Light Dragoon unit, the 5th (Belgian) Light Dragoons.  The uniform was patterned heavily on the French Chassuer a Cheveau, so much so that the unit became a victim of 'friendly fire' during the battle.  Lots of green and yellow, the trumpeter in reverse colors 'pops' the command stand. 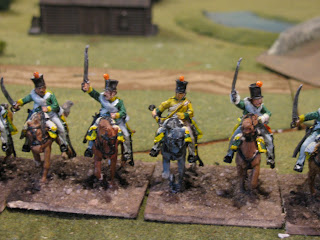 Next up the 6th Hussars, whose charge into Pire's cavalry was done without deploying into battle formation.  The charge did not succeed, and the unit suffered heavy losses.  Still, the uniform is nice!  Always fun to paint Hussars. Except for the braid, I never seem to get it correct.  The officers' shakos were red, as were the trumpeters' shakos per the Osprey title on the Dutch Belgian army. 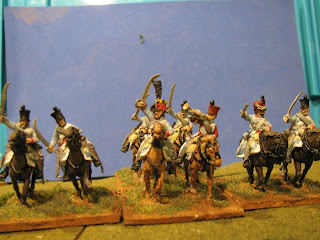 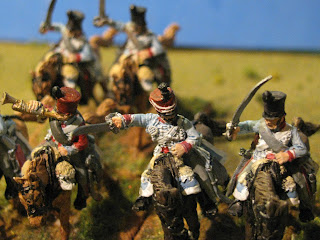 We also can view some limber teams that have been patiently waiting for over a year to be finished.  They've ( the castings, that is) waited as Highlander and Rifle and line troops were added to the British, as Cossacks and Dragoons were added to the Russians.  They even got their hopes up, only to be dashed as a Russian limber was completed (although in honesty that limber team had waited a dozen or more years to be painted.)  Still, they will add some color as they trundle across the table in our games. 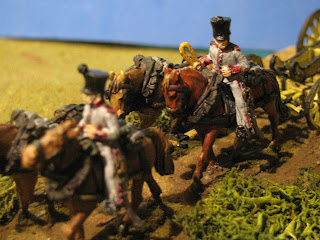 The uniforms were evidently the same for all the train, at least the Osprey on the Dutch Belgians lists on this uniform.  The grey shows off the red and black trim nicely. 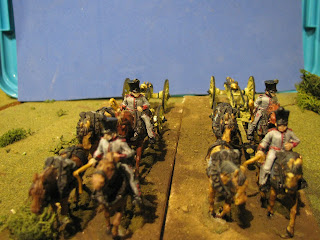 So, one for the foot battery and one for the Horse battery at Quatre Bras. Here they are in all their glory!  A little static grass and they'll be finished.  Note only four horses to the team, an indication that teams varied from country to country.  Brunswick's teams boasted six horses in the traces.

I know I should do a limber for the half battery that came with the light cavalry in Merlen's Brigade.  Maybe in the future.  For the next few months, some Hanoverian and British troops need their units done first!

The Dutch Belgians are not completely out of my queue, however.  I decided to take some of the 'extra' figures and produce at least one brigade in Chasse's division. So there are two Dutch Line and two Dutch militia battalions to join another Belgian line battalion and a Jager battalion that are already painted.  When they are completed, you'll see them.
Posted by pancerni at 2:10 PM 7 comments: