Nice addition to the Hanoverians

When I decided to work at creating a table top version of the battle of Quatre Bras, I knew that some of the units were under represented as figures.  Having been around as long as I have, I am always reaady to do a 'paint only' conversion to have a stand in casting for a unit.

Such was the case with the Kielmansegge Jager Corps of Hanover.  It is present in the brigade of Hanoverian line troops, commanded by LTG Kielmansegge.   It was only two companies strong, and was in service only since 1813.   I did not expect to do more than decide between some Prussian or Hanoverian foot figures, and paint appropriately.  I had the uniform information, a short but useful article in an old issue of the "Courier" by NEWA.   As such, I decided they would be one of the last units completed for the Hanoverian force.

To the rescue, a few months ago, came the great folk over at Westfalia Miniatures, who announced the unit available from their recent foray into Napoleonic figures.The thumbnails below are links from the Westfalia website, I hope they don't mind sharing. 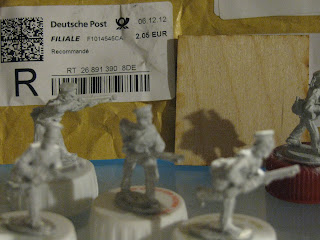 I ordered the figures the fifth or sixth of December, they shipped on December twelfth and arrived safe and sound December 24th!  Yes, gentle readers, I scored new figures two Christmases in a row, although this year it was a purchase and not a gift.  Using a first coat of a light green (Ceramcoat Medium Foliage  Green), here are some of the figures in close up.  Obviously, I  need to update on the progress as it occurs. 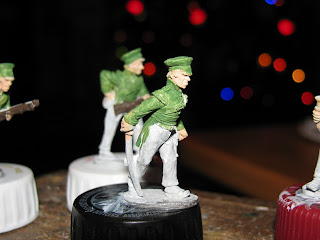 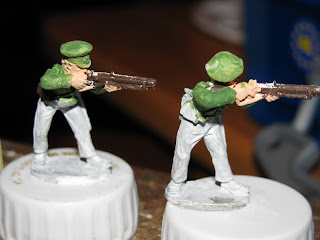 As you can see, the figures are a treat, eight different pose!  I'll probably mount them four on a couple of 2" by 2" stands as that would fit in with my unit size.  Or I might do tow stands of three and a third stand of only 2 castings, the Officer and Hornist. Decisions, decisions.

The folk at Westfalia were very good at processing the order and mentioned that someday they might produce a set for the 3 pounders that were part of the Jager Corps.  That would be a real treat, but first I must paint these fellows.  Hmmmm, where is that bottle of dark green?

The pies and cookies are baked.  The food for tomorrow's family dinner has been delivered except for the roast and vegetables we're to bring.   The packages are all wrapped, we've even deliverd a few around to relatives we'll not see tomorrow.  Midnight Mass is in a couple of hours.  I even remembered fill the tank in the car in case we do get the run of poor weather days the man on TV is so excited about.

Merry Christmas to you all, I hope the holidays are a pleasant diversion from the ordinary routine.  I hope the New Year brings more happiness to all of you.

I may even get to a blog entry on gaming this week!