Last year my thoughts turned to Pulp, which for me includes horror if it's set inthe 1920-1940 era.   This year I started to paint some figures for the Mansions of Madness boardgame I acquired back in the fall!    So far there's been one attempt at a game, bit of a learning curve when no one playing has 'done it' before.

But the mini's are cool.  Here are a few, the ones that I have gotten done. 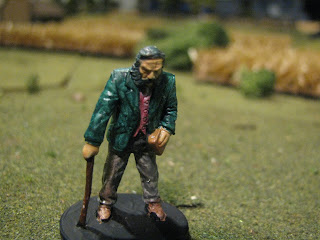 A fellow who matches wits against the dark forces. 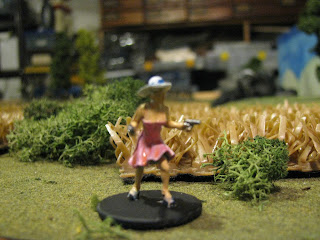 A rather stylish heroine who relies on firepower and grace. 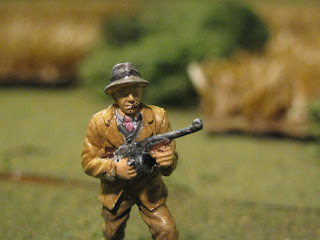 A rather rough character to whom all solutions involve a Thompson singing. 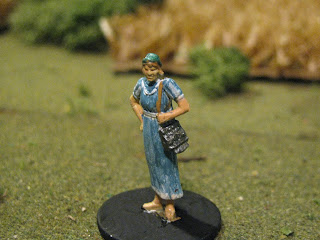 A woman who relates to research and lore before firearms.

There are people who you might not want to meet on a dark staircase....can you say witch?  Especially when they are hummming "I 've got you under my spell." 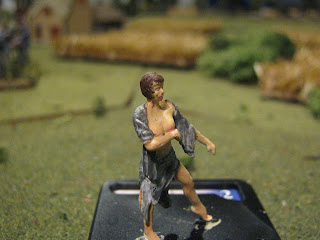 Of course there are also scarier things than witches that go 'bump in the night.' 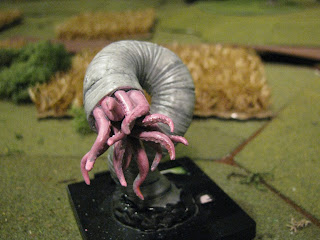 Cthullu stuff is so inspiring. So cuddly, so much to squirm with....

I won't win any awards for these, but they paint up fast and are a nice change from lace and cords and all that stuff!  I'll clean up the bases when I finish the other figures in the set.

The game promises to play rather more quickly than our first attempt, and is a cross between role play and a board game.  Of course anything with miniatures this cool.....uh, I already said that didn't I? Losing it already, am I?
Posted by pancerni at 4:18 PM 5 comments:

If they will not accept a parking ticket call the precinct office for help!

I have been busy with not painting this last week, but I did squeeze in these 'Officers of the Law' as reinforcements for my boys on the beat. I hope to get in a smallish pulp game soon, with the Police attempting to thwart some bad guys.   Or maybe I'll try to game out the attempt to seize the New Orleans Post Office in the 1930's. 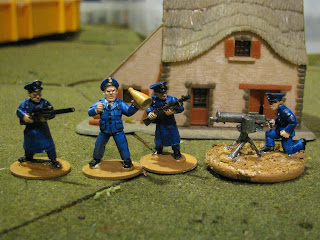 Compared to the recent work on the Hanoverian infantry,  it feels like cheating to get 4 figures done in under two hours!  Thanks to Bob Murch of Pulp Figures for such nice figures to paint!

Email ThisBlogThis!Share to TwitterShare to FacebookShare to Pinterest
Labels: Pulp

The last two regiments of the original project were the 6th and 7th CT Volunteers.  They look remarkably the same, as they are outfitted in the blue coat/blue pants with kepi that was the predominate uniform in the US forces. I did attempt some 'terrain-ing' of the stands, adding very local rocks (CT red sandstone) and some worm fencing (of which I am inordinately proud of how they came out) to the stands. 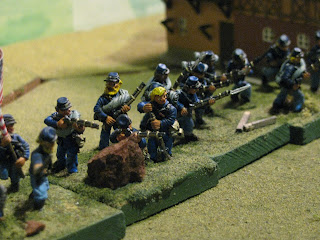 Some of the sandstone and an errant rail in view near the 6th CT. 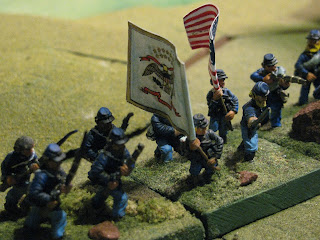 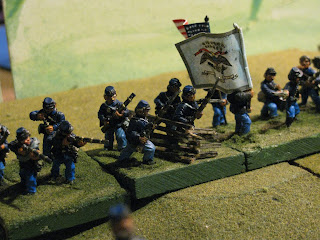 7th CT command stand with rail fence.  HO size timbers, washed with black ink & water made nice weathered fence rails.  The fence style is the 'worm' variety which is simply laying rails interleaved on the ends. This takes a lot of wood, but since you needed to cut the trees to till the fields, it served two purposes. Click on the photo for a closer look.
Posted by pancerni at 11:11 AM 4 comments:

The infantry were the core of our ACW project. We chose Johnny Reb as the rule set, we wanted something tactical in nature.  We chose to do a brigade of infantry per side as we had usually a 7pm to 10:30 pm weeknight window for gaming.  We got a good number of games played with the amount of units we made.  We painted the side we were most interested in playing, so everything about this era was covered!

Here are two of the ACW infantry units painted, eh, awhile ago, again, all the figures here Dixon.  The first unit was the 54th Mass(achusettes). 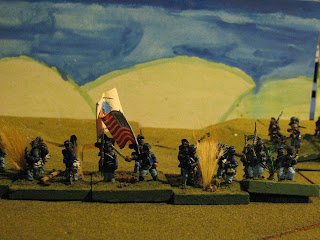 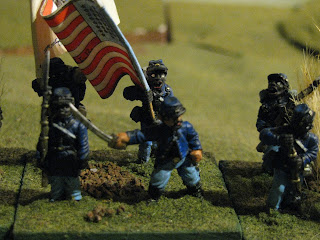 Close up of the color stand. 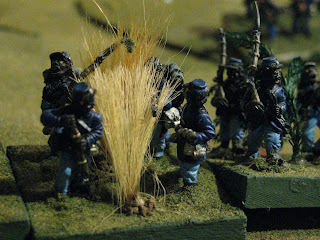 Detail on one of the bases. 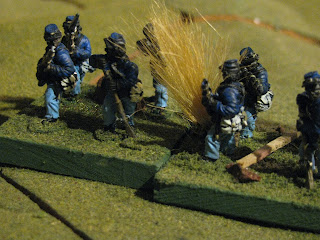 Other end of the line. 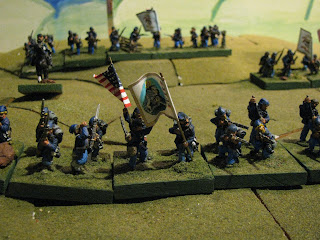 The 76th Pennsylvania, the Keystone Zouaves. 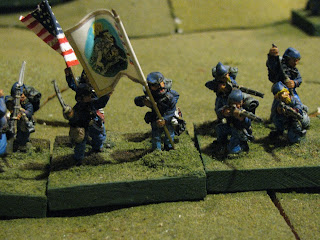 Color stand of the Keystones.


I just looked on the bottom of the stands....these units are 20+ years old!  That's the good part about historical  games.  The figures don't go out of vogue based on a change in ruleset!
Posted by pancerni at 10:44 AM 1 comment:

Locally, some of the gamers are considering putting toes in the water of the ACW.  I thought I'd share the units I have available with everyone.  These are mostly Dixon, painted in the early to mid 1990's.  The units were a project based on a like number of Confederates being painted by my long time gaming friend Roger. 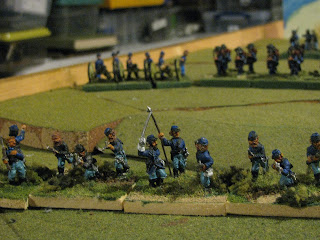 I must go and add paint to trim the bases!  The dismounted cavalry unit is of 4 stands, as under the Johnny Reb rules we used, the fifth stand was detailed off as horse holders. 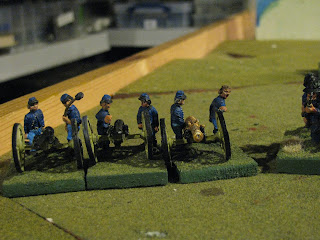 The infantry consisted of five units, and later I added a sixth.  The first up is the NY Volunteer Regiment nicknamed the Garibaldi Guards. 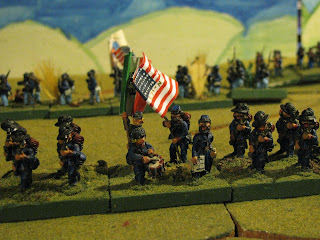 I'll follow up in the next post with the rest of the infantry.
Posted by pancerni at 12:03 PM 2 comments:

Whoa, I had forgotten that I had not posted information on the Swedish Infantry figures.  I am 'in the middle' of rebasing the units, but I did want to share this resource with you

I had earlier painted the Swedish standards by  hand.  The results were passable but I had always thought I might go back and redraw the unit flags.  Recently I found a website which not only provided information on Swedish infantry in English, in a format useful for a wargamer or just an English language speaker who wanted to know a little bit more on individual units.  Best of all, the site has flags for the infantry units.  There are a lot of unit's standards, most from at least early and later in the Napoleonic Wars.  The site owner says he will send a file ( I think in powerpoint) for a nominal fee of the standards----all 77 of them. I have emailed today for the file, and plan to use the flags to 're-standard' ( I know it's not a real word) my Swedes.

There are also a few nuggets of information on the Swedish units from the short unit histories provided, take the time to read them!

So where is this resource?  It's called Sword and Saber.

Some of the standards  printed and mounted (I just couldn't wait): 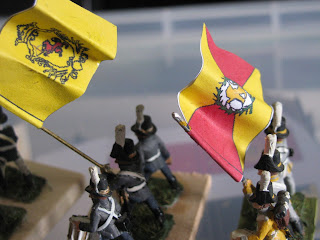 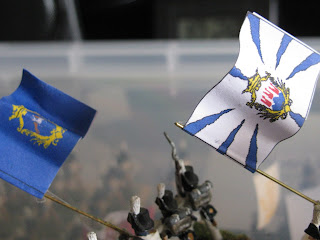 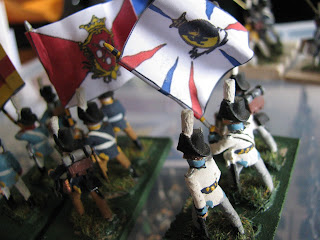 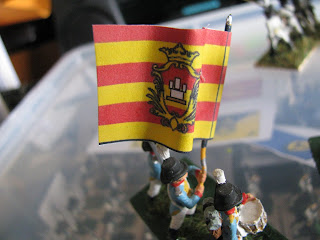