Two units complete.  Ok, one is a cheat as I got it in a trade, but it gets on the table, so it counts!

First up is the easy one.  The 14th Cuirassier, from my friend Roger, in a trade for some various figures. It completes my need for a second regiment at Quatre Bras. 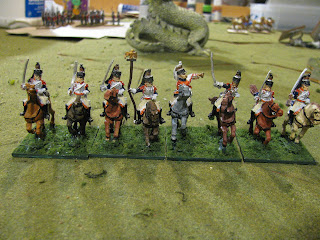 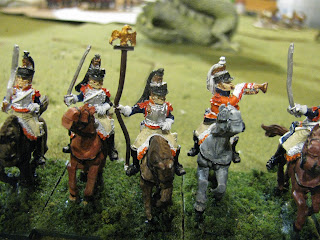 I traded some of the new Perry Light Dragoons, early uniform for Roger to complete his Peninsular British.  Really a win-win.  Now I just need to paint up a Pire for the lights and a Kellerman for the heavies, and the overall structure is there for the French cavalry.


Next up is the first unit of Hanoverian Hussars built up from the Perry plastic set.  I chose to start with the Bremen and Verden Hussars.  Astute collectors will notice the unit is the first on the page of the Perry Brothers enclosed painting guide. Maybe that's why they got painted first. I dunno, and that's my story. 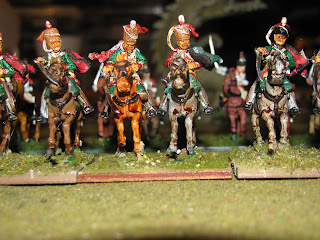 Close up of the trumpeter & Officer 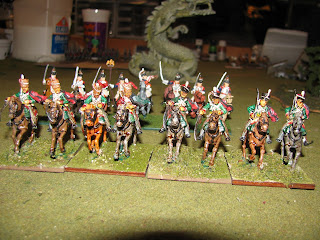 I found that until nearly finished, I did not enjoy painting these figures...the uniform just did not seem to want to be done, with many errors of omission to be repainted as I slogged through the details. Then suddenly effort became satisfying and I am very pleased with the result.  On to the Cumberland and the Prince Regent hussars. 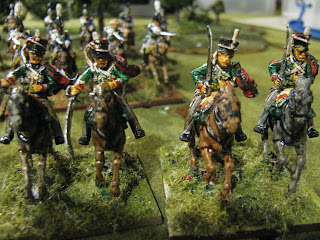 I am also almost done with the third unit of Dutch Belgian Carbineers, I'll post as I complete the unit.
Posted by pancerni at 12:08 PM 2 comments:

Hmm, truth in advertising at work.  I have finished painting all three units for Tripp's Brigade in 1815.  These completed units finish off from the stands painted for the April Snappy Nappy game, as well as the final unit in the heavy brigade of Netherlands cavalry in 1815..

The troops are are Perry miniatures, from the Dutch Belgian range in the Perry Napoleonic group.

First up are the 1st Carbiniers, still in the old uniform with the bicorne.  The 1st regiment had yellow facings and "hound's teeth" on the saddle sheepskin. The unit saw combat at Waterloo, performing counter charges to the French cavalry units assaulting the Anglo-Allied infantry squares. 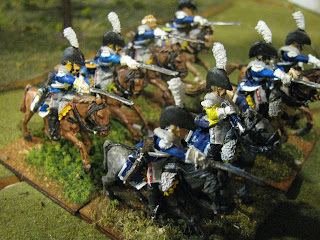 The saddle cloths were dark blue, as were the round valises.  Both had white tape. The bugler was in reverse colors for the jacket. 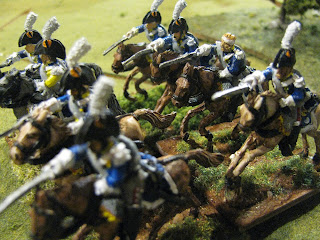 The poses were very active in these, with a cavalryman sporting a head bandage as well.  Obviously the unit has been busy already. All the poses were one piece, horse and rider, with the exception of the bugler, who had a separate arm. 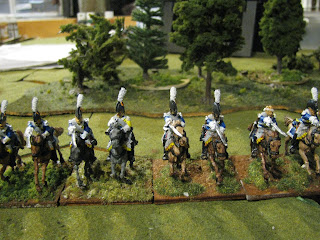 A photo of the unit in line.  Seems I have an extra casting for other projects.

The second unit was aptly enough the 2nd(Belgian) Carbiniers, who, unlike the 1st and 3rd regiments, did use the 'new' uniform.  Rather than the bicorne, the 2nd sported a classical styled helmet in steel. The facings and hounds teeth were red for the 2nd regiment, which is a nice combination of strong colors to paint. The unit was also very busy as a counter to the French afternoon charges on the Allied squares.  Trip's Brigade was the only brigade nominally a heavy cavalry status that did not get chewed up in the charge that the Union and Household Brigades made earlier against the French infantry attack by Marshall D'Erlon. Throughout the afternoon they counter charged the French cavalry attacking the Allied squares. 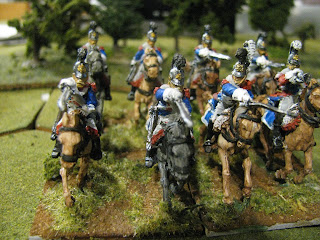 There is an additional pose in this unit as opposed to the 1st Carbiniers. You can see the 'sword down at the side' pose in the rear rank, which includes almost a rearing up with the horse. Neat effect. 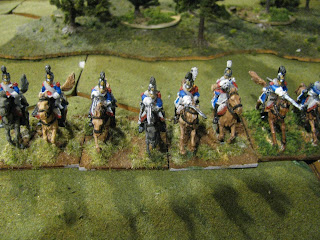 I used my usual collection of craft paints (delta ceramcoat blues, Blick supply black and red; Vallejo for the flesh, steel and brass; tube acrylics for the white and yellow.  The bases are the Litko 2x2 inch thin (1/8th? ) with sand white glued down, covered in a railroad modeler ground cover dark brown, with static grass as the detailing.

Some of you will note I did not paint the red stripe on the overalls.  I get conflicting stories on the stripe being added after Waterloo, so I left it off; always can paint it on later.

Which is almost what I did to the third unit in the brigade!

The final unit in the brigade was the 3rd Carbiniers,  who also sported the 'old' uniform with the bicorne.  The regimental facing color was a 'red pink' which I have shown here in a Blick craft color.  The poses are the same as for the 1st Regiment, indeed, the same line item packs from the catalog were used as for the other unit. 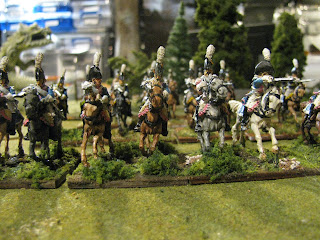 Overall shot of the 3rd Regiment. 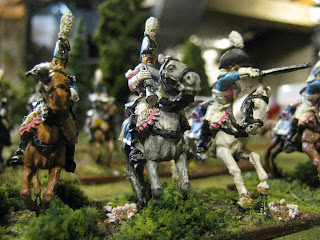 Look, I have remembered how to use the camera's Macro!

I also have a long term project, in that although I have the figures, I do need to paint them all for the full effect. Here is a hint, the figure painting is a work in progress. (Yes, I did buy that many boxes to get the figure. Of course I will paint all of the troops as well. )

After all, I need something to scout the French with in the next Waterloo campaign. 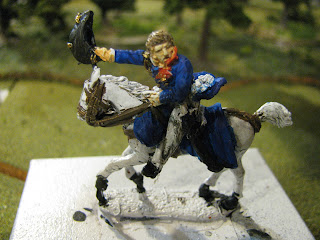