More progress on the painting front, the Grenze regiment Deutchbanater.     There are actually 36 castings, so I will get two battalions on the table.   .

The unit is part of the 1809 campaign build of Austrians in Westfalia. 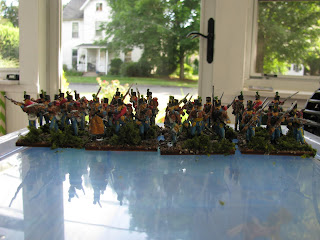 Again, one photo too dark 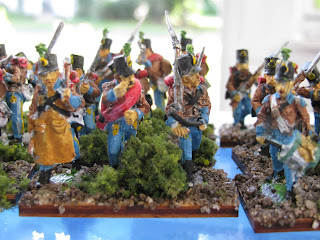 and one too bright.

Since the cataract surgery leaves me with a narrow 'field of view' (sort'a like a cheap camera) to focus on detail, items like the bear claws are very difficult to do well. Shucks, they are hard to do at all.

I am getting lessons on my wife's SLR. Hopefully photographs will improve when I enter the unit on the upcoming page for the 1809 Austrian force.

I have drafted in some Austrians from an 1859 range  I have kicking around into the available units for the Austrians. Specifically Grenze troops, the uniform is quite similiar, the Army was pretty conservative in dress.

More on that later.
Posted by pancerni at 5:37 PM 2 comments:

Having a lot of new castings of Swedes from Perry Miniatures, I have finally decided on which units to paint first for the 1813 campaign. The castings are from the Perry Miniatures range for the Swedish Army. The figures are full of animation in the poses, at least 4 and sometimes 5 different poses in a pack. Even the copper canteens are placed in different places on the belts of the different poses. .

Here are the first completed unit. 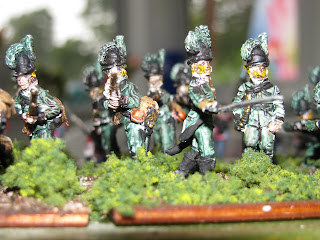 I still am taking lousy photos, this one is very washed out. 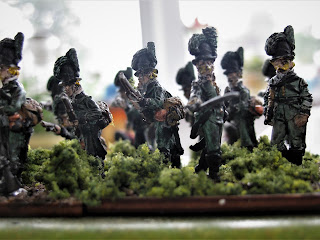 While this one is too dark.

Both are of the Varmland Jager Regiment, with dark green coats and black facings. The cuffs and collars are piped white.


Next up, the North Schonen (Scandia?) Regiment.  I went with a Liquitex color, "Swedish Blue" for the coat.  It is actually less vibrant than the photo shows. I will likely use the color for the 'dark blue' coated regiments, in order to quickly denote them from other 'dark blue (cough, Prussian) units in the Army of the North. The jagers have a green 'brush' the line companies a yellow one. 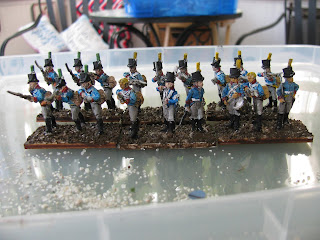 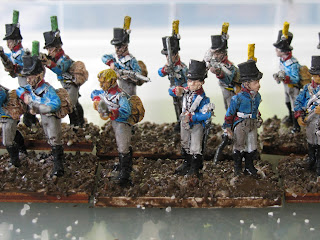 I will be adding a standard and some flocking.  The units will be on the upcoming page on the 1813 Swedish Army. More on that later.