It's not often you can make reference to separate events in popular culture, occurring decades apart.  Rising to the challenge, I present a combination of the 1970's Landshark skit from SNL and the 2013 made for cable movie Sharknado ( my daughter and son in law made me watch the latter,  that's my story and  I'm sticking to it.)
Land Shark Company 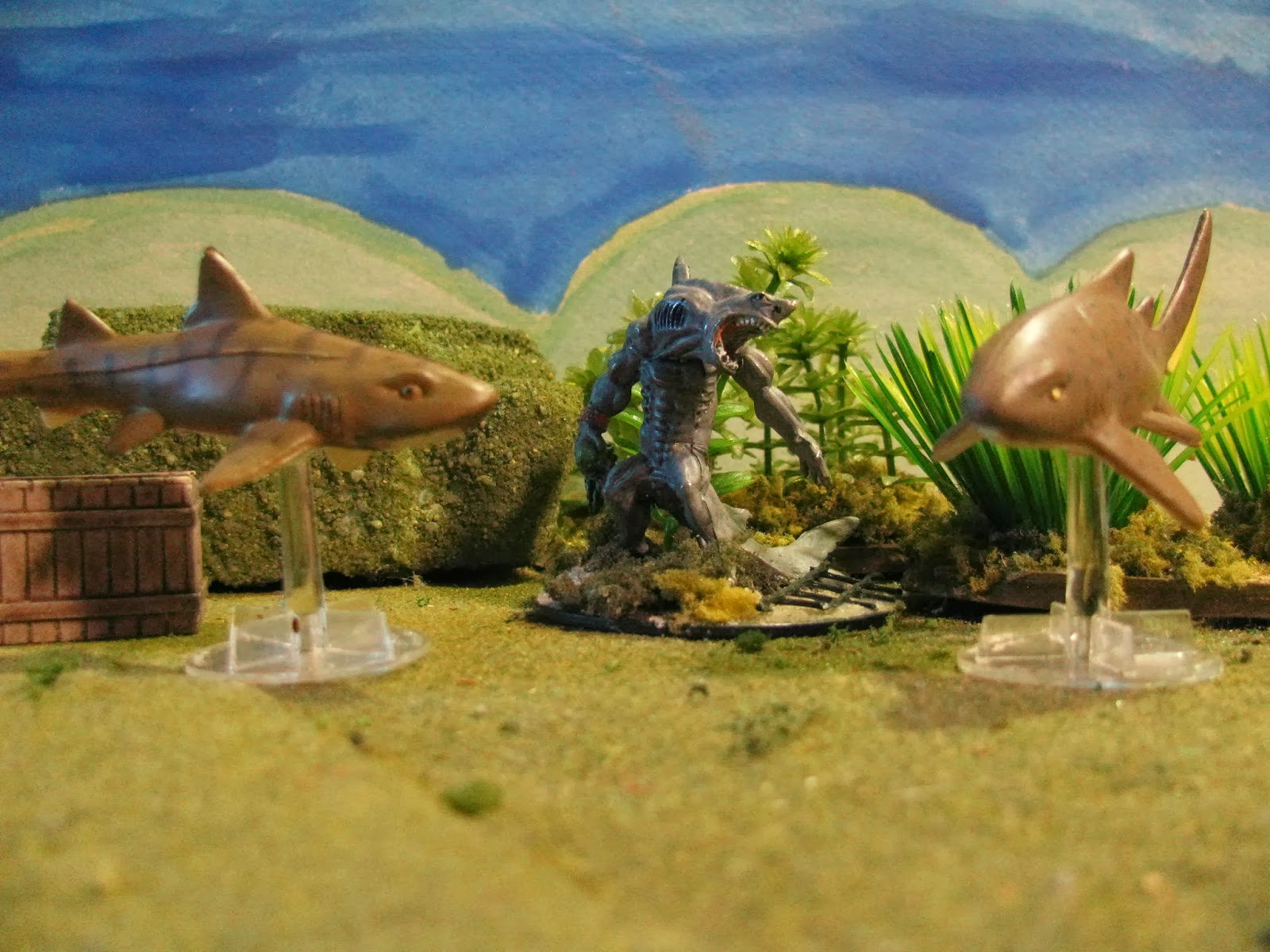 This is a whimsical take on a 'Sharknado' style monster based company for use in games of IHMN.   Nothing is meant to be 'realistic' but I did try to keep the honor in the mechanics.  It could be used with some cultists if you'd rather think of the background as an demon rather than a mutation, albeit Dr. Munro might have considered this after a bad batch of seafood.

Of course we need the Land Shark as the kingpin in the company.  So: 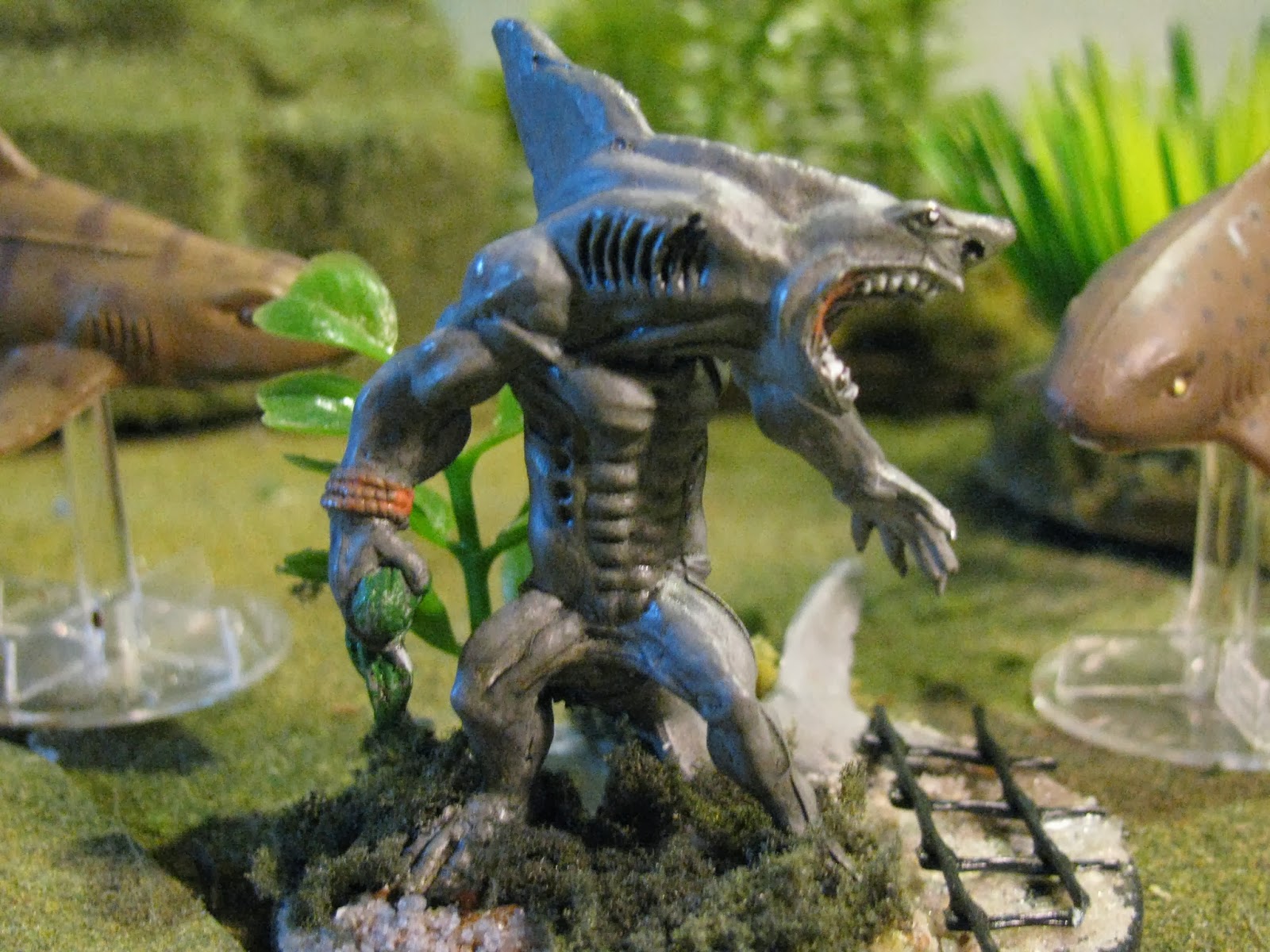 The swimming attribute actually allows the sharks and the Land Shark to move in water or on land.   The ideal terrain for the gang would be 'the Docks,'  a small boat, a coastal area.
So far, there is no Victorian feeling for the crew, so we need the assistance (as does the Land Shark need recon )  of a cult of Shark worshippers, of course. 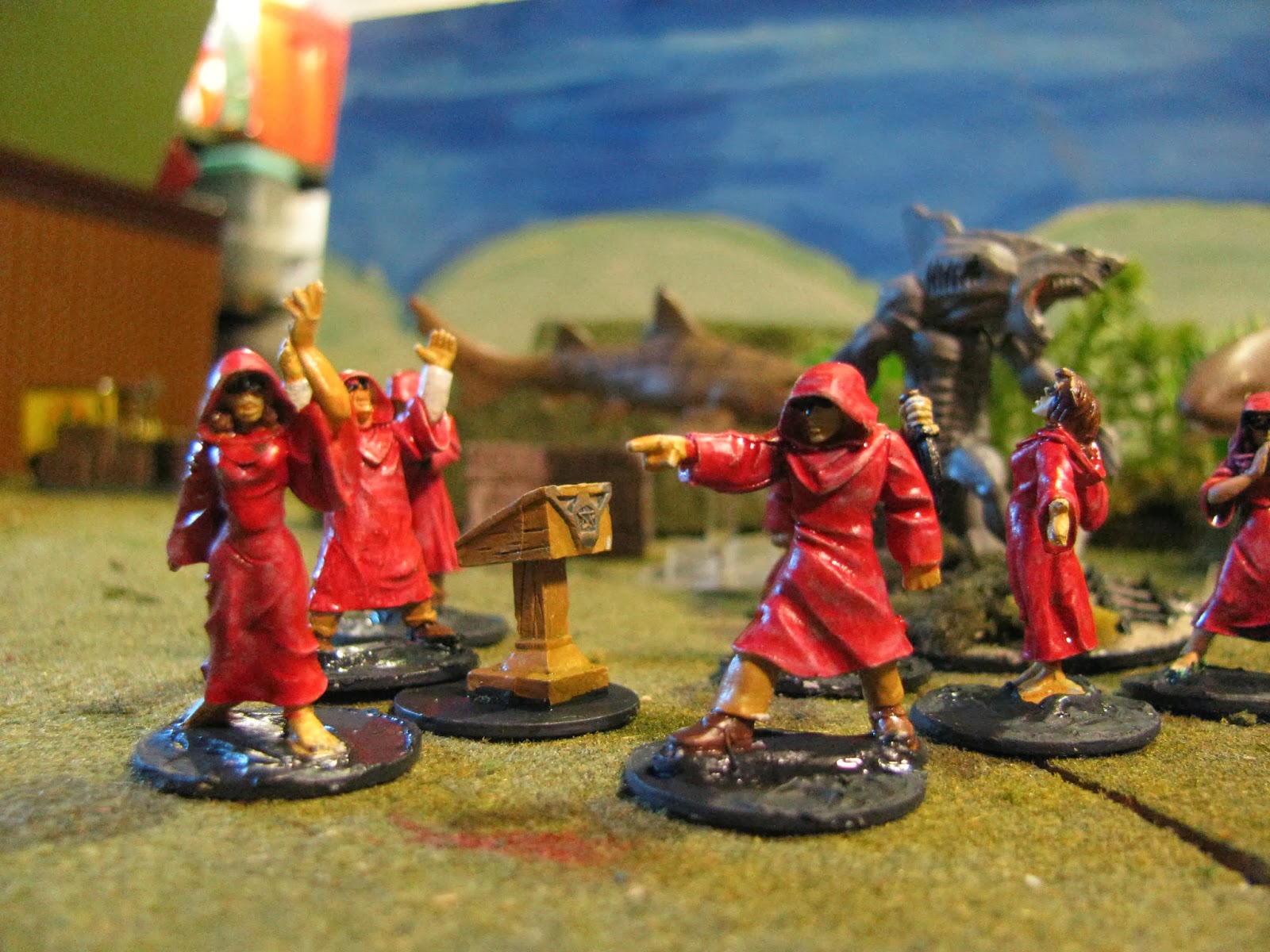 Leaders can be either male or female, on of the few places for equality of sexes in the period. This obviously puts them outside the circle of decent society. 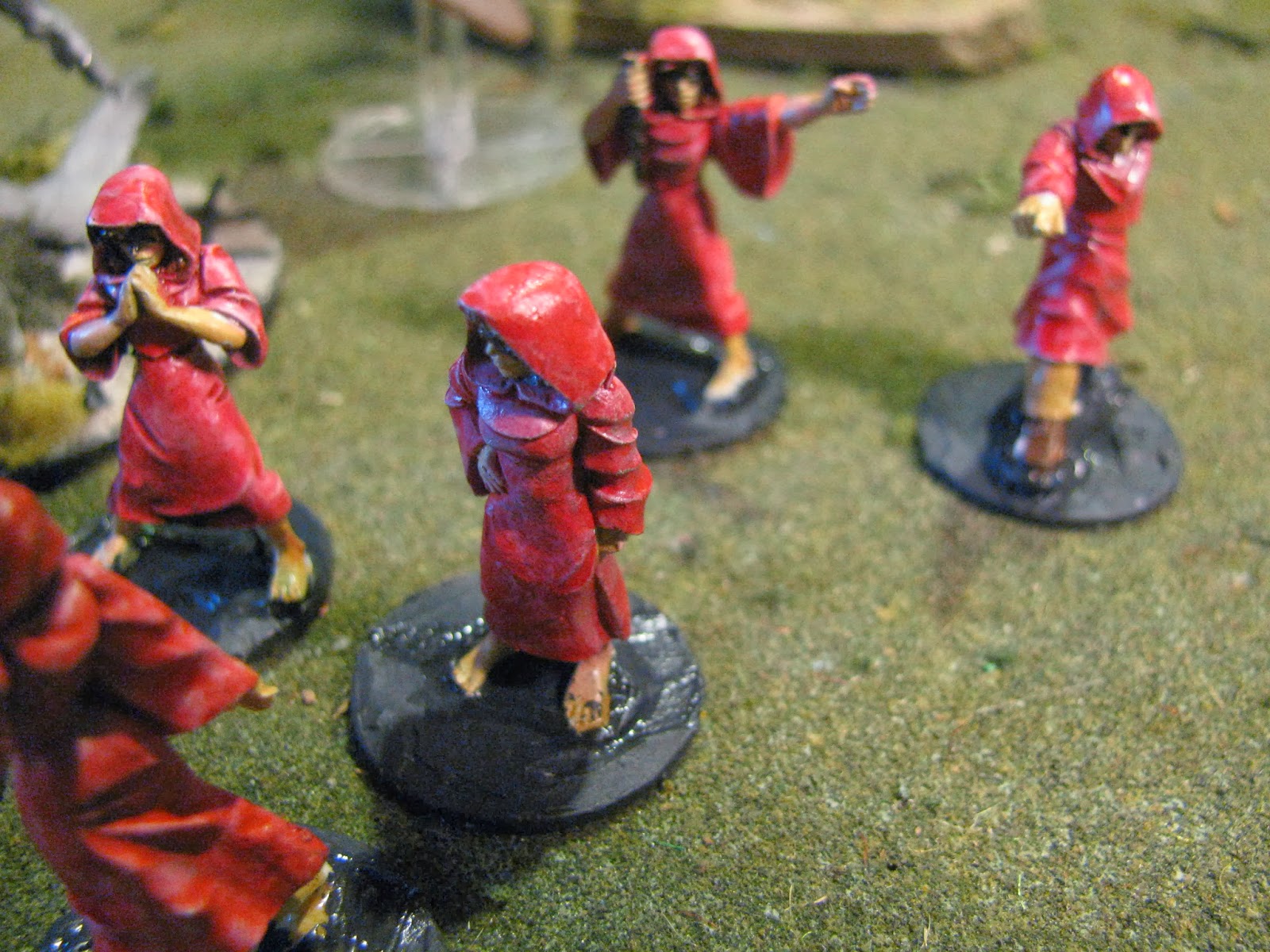 It is assumed either the cultists call the Land Shark from a chanting circle, in which he appears with the accompanying sharks.  Obviously it would behoove the opposed companies to prevent the chant from taking place.  The Leader simply needs to have the cultists in a chant circle, and pass an unmodified pluck roll for the Land Shark and friends to appear. 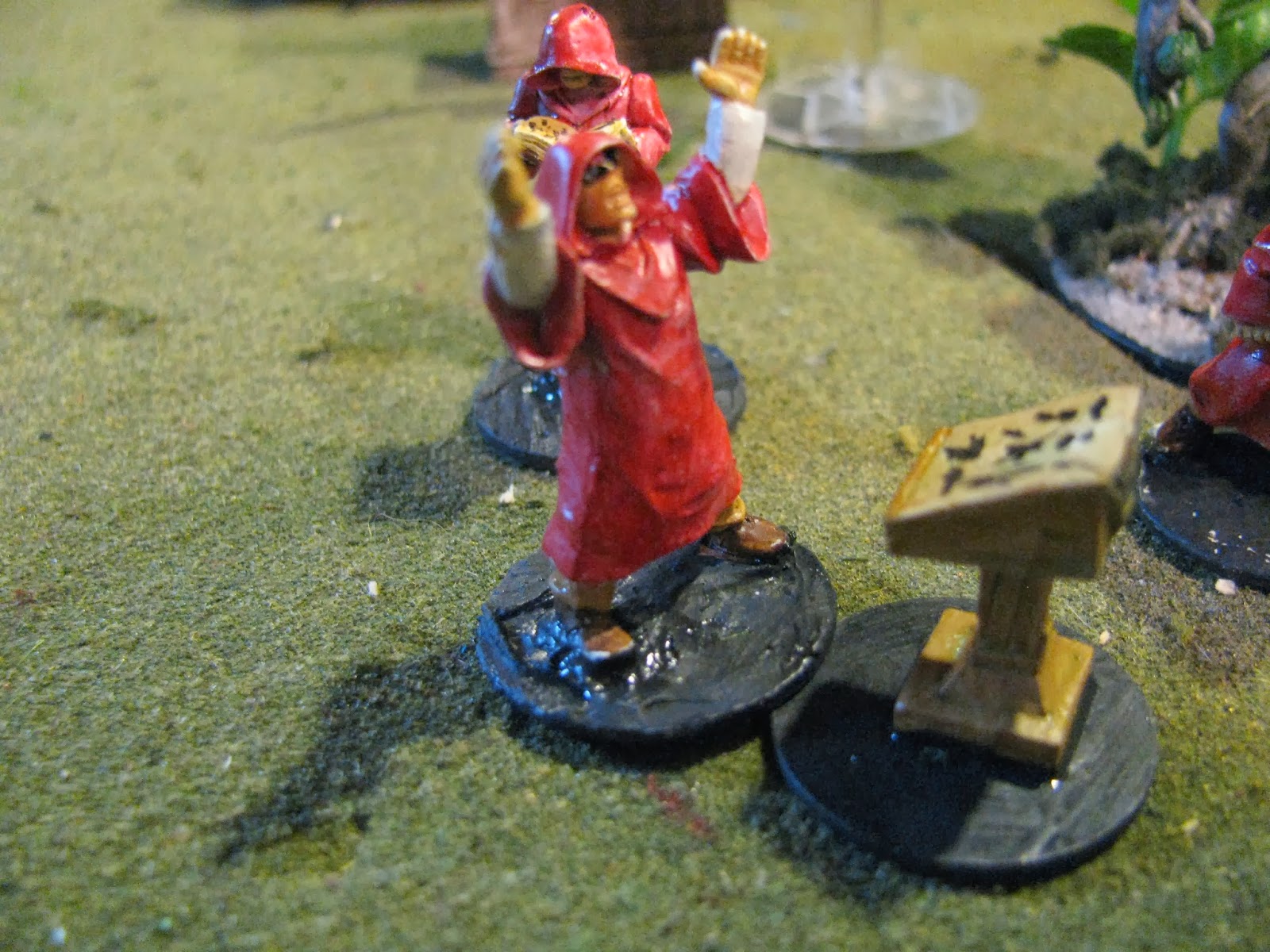 Of course, if the leader dastardly sacrifices a cult member, the sacrifice would increase the Pluck roll by 2.  Sacrifices can be male or female, but are almost always portrayed as a female, newly recruited to the fold. 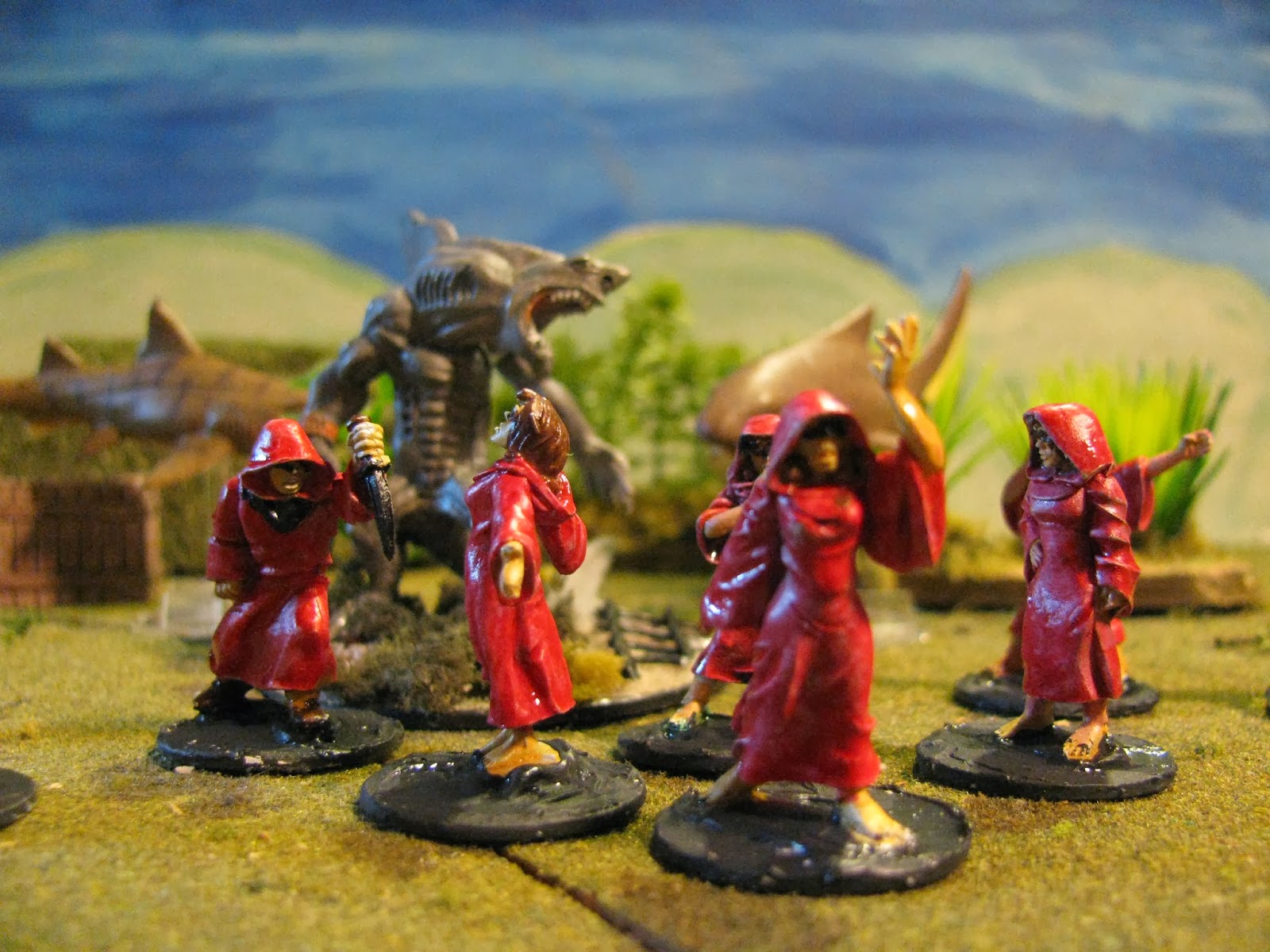 Posted by pancerni at 10:55 AM
Email ThisBlogThis!Share to TwitterShare to FacebookShare to Pinterest
Labels: IHMN

I say, there something Fishy in Kurrmark, what ho? The game is, er, a-fin, Watson!

"Candygram...." should be mandatory part of the cultist's chant!

The game is de fin atively afoot. ( Thanks for biting on that one.) The chant is indeed Candygram, but spoken in Latin.

Oh, by the way, finish your Portugese Hunting party up. They have visitors.

Well, if there's a foreseeable use for them, I could have them done in a week or two. Be my fist completed foray post 1865!

Awesome, I had a vague idea of a shark IHMN army but did nothing about it, of course.

OK, so I dug out my 24 Portuguese and resumed painting them. I have another 24? Zanzibari types (turbans or fez) that I could contribute, plus 2 "pack cammel;s". Somewher I have a Lioness, I think, but I may need some "character" type figures.

We have plenty of turbaned types, but you could always have an opposing force. A Lioness sounds cool, and you can always turn a figure into a 'character ' by playing with the stats. Sounds like they'd have a unique look.

You are, of course, stark staring mad. But I never hold that against anybody :D
Interesting theme that could cause havoc on the battlefield.
Cheers,
Craig.

Glad to be a source of amusement!