Welcome to the second article on the Brunswick contingent of 1815 as such on my table.

The 1815 contingent included four battalions of 'light' infantry, again raised in very early 1814 after the French had retreated from Northern Germany.  Three of the battalions continued the tradition of numbering, being titled the First, Second and Third Light battalions.  The fourth unit was mercifully called something not a number, the 'Avant Garde' or in English 'Advance Guard ' battalion.

The First, Second and Third Light battalions shared a similar uniform style to the line units, an all black ensemble with the units identified with collar, cuffs and trouser stripe in a distinguishing color. At Waterloo the First battalion had buff facings, the Second had yellow, and the Third had orange.

The First Light Battalion, in its buff facings.  According to the information in the Osprey MAA #167, in July the facings changed to red. But in June, they're still buff. 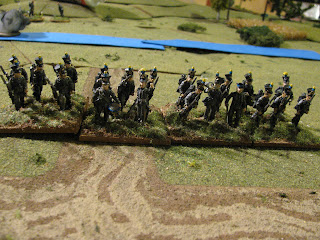 You may notice that the stands are slightly different from the line units in that they are grouped in five figures to a base rather than the six.  I wanted the units to stand out a bit from the line units, and also the adjustment allows me to field some single figures as skirmishers using skirmishing rules sets. 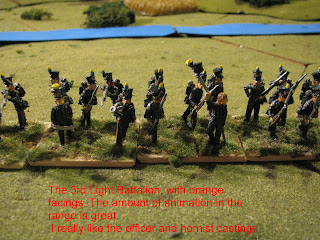 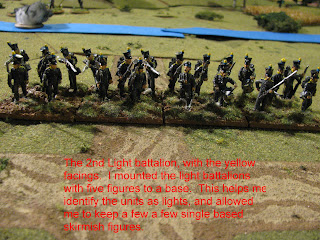 The fourth light unit, the 'Avante Garde' was composed of two companies of light infantry armed with musket and two companies armed with a rifle.  Since these units were normally expected to operate in open order, I mounted the figures three to a stand.  The use of the 'corsehut' rather than shako and the basing help the unit stand out on the table. Some of the range's best animation is again shown in this unit. The officer in the musket armed, black coated light infantry company really does not look amused. 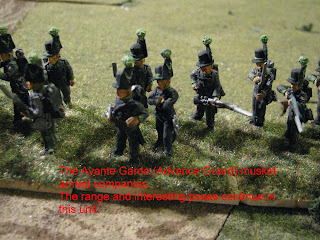 The rifle companies, called the 'Gelernte Jager' were dressed in a grey uniform. Shown here in again, the skirmish order style basing, the poses are what's fun in this unit, as well as a break from the black uniforms.  I used a Ceramcoat grey called 'Dolphin Grey' as the basis of the uniform color as it came the closest to what I had in mind.   Two of these figures, the kneeling figure reaching for a cartridge and the hornist, were actually the figures that threw me over into this project. After all, when you're after toys, the eye candy is what inspires!  I am not as pleased with the paint job on the Jagers, I did not get the definition I had hoped for in the color.  But certainly acceptable to me until I figure out something that will be better. 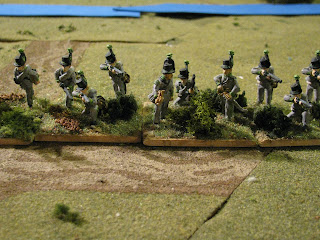 In talking about colors, the black uniforms throughout were painted first in Ceramcoat 'hippo grey', with a stain (more paint than water) of  Ceramcoat 'Charcoal', with a final wash (more water than paint) of black. This was actually the recipe for painting black horses on an old webpage, now defunct called 'Getting good at painting' by a English fellow wargamer  named Martin.  Just shows that you can transfer ideas to various projects, in this case it worked well enough for me, as I am no good at dry brushing as a painting technique.

Next up are the artillery and command, the cavalry units being the finishing article.
Posted by pancerni at 8:14 AM

I suspect you might be able to enhance the jagers a bit by some limited dry brushing of the uniforms with a still lighter grey shade, and using some Hippo grey to shade the folds of the cloth by hand - a bit of a pain, but it's a small number of figures so it wouldn't really take very long to do.

I may try that on the castings mounted singly first. Thanks for the idea.