Looks like another new project.   Recently picked up Stargrave  and heard there would be at least one group at the local store, Tabletop Games. Nothing like another project.

Stargrave    ---the sci-fi version of Silver Bayonet. Similar in scope but differing in some of the mechanics.  Luckily I have a bunch of figures painted that should allow for at least one crew for an initial run though the game.  We have been having a lot of fun with Silver Bayonet so I have decided to check this out. 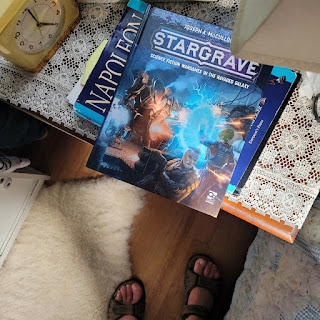 Apologies for the intrusive toes. Should crop for this sort of thing!

Just thumbing through the rules now. May do a walk through with our local group to plumb interest.

Long term I have more ambitious plans for my own campaign setting. More on that after I at least put the skeleton of the idea together.

Posted by pancerni at 6:04 AM
Email ThisBlogThis!Share to TwitterShare to FacebookShare to Pinterest

My understand is, Stargrave us a sci fi version of Frostgrave.....is that right Joe? I have played about half a dozen games of Frostgrave and have enjoyed them a lot, so look forward to seeing what you think of its sister rule set!

The start of a new project provides inspiration and anticipation. Good luck!

Im interested to see how this works out as I am considering it myself, as I have a loft full of scifi figures it should be possible!
Best Iain

Stargrave is indeed related to Frostgrave..share an author. So does Silver Bayonet , which we like here, has the same author.
I have found minis that I think will make a good set of 'soldiers ' in the crew, next is setting up a Captain and first Mate.
My set up for a background is also jelling. More later (including photos.)

Your local store seems to be very "state of the art" which is great for you given your location. Having looked on a map for Kensington it appears to be a bit in the "sticks". Is that fair ???? The inclusion of "toes" adds realism to the photos !!!! Regards

Tony,
The store is very oriented to promoting and supporting via platforms on the web.
Kensington is part of a bunch of small cities & towns that run in an arc from Hartford to NYC. So, small town but in a pretty built up area.
Joe