When we left off, the combined column of S'Gottland lancers and Daharan foot had just left farmer Alonzo, and were about to cross into Orbajosa's southwest corner.

Our first Friday game in November, Greg had a tire go in the morning and was waiting for service at game time. Roger picked up on both units in the column..  Astute readers will note the substitution of Hanoverian Hussars for the Spanish Guerilla lancers.

As the column passed through the murky night in the woods north of Alonzo's farm, three points of light were seen in the woods. Two files peeled off from the lancers to investigate the nearest lights, one on each side of the forest road.  The lights turned out to be fires.  The right hand fire had a scarecrow standing next to it, a silent sentry to the night. Strangely, no post held the scarecrow erect.  Unsure it was really a scarecrow, a lancer poked  at it with his weapon. The lance head returned only with straw.  Unnerved by the eerie sight, the group of scouts returned to the column.

Passing a command roll for the encounter, the patrol was puzzled but not dismayed.

The other patrol was less fortunate, as thy approached the campfire, a wail from beyond the ken of men was heard, 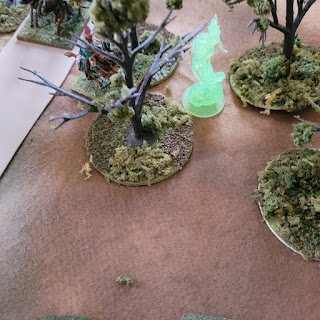 which caused the file leader to return his men near to the column rather in haste. Not what they signed up for, he reported. ( To be fair, Roger asked 'how do they kill it?' To which I replied 'do you have a magical weapon from an ancient Celtic hero?') 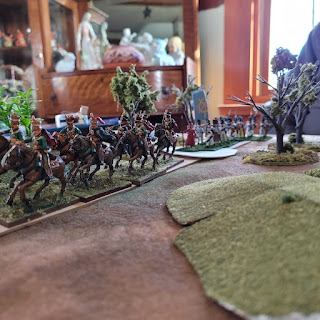 The patrols return to the column, and the column moves North into Orbajosa.  The Ban'shee goes back beyond the physical plane after the horsemen retreated. 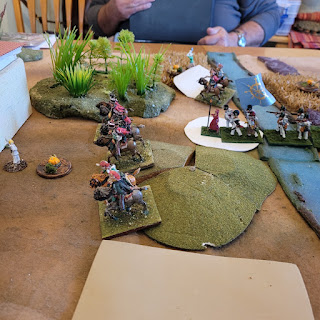 As the night passes the witching hour, the cavalry deploys near a farm. Not taking any chances. 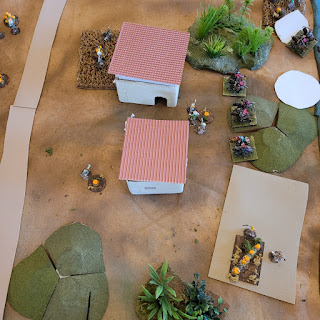 Harvest time is near, and our story continues this coming Friday. Greg will run the cavalry...maybe the infantry lead into the farm.  ( to be continued ).

( Honestly  the story is spinning itself and does not want to be stopped.)

Bad luck for Greg missing your next instalment, which looks to have been a bit of fun! I like your answer on how to kill a Banshee!

Greg had a bad piece of luck, missed the game, had the afternoon waiting for the fix, and worst of all, needed 4 tires replaced. Ouch!
But, now only 2 days till the next installment.
I am not sure what kills a banshee, but it sounded good at the time. Who knows, it mayshow up again.

No "vegetables" on the plate... yet.
I like the answer as well, especially if delivered deadpan!

There is no other delivery method.