The Adventure started with this:

Gentle readers, you may wonder what all the fuss is about.  It starts here.

To his most benevolent Excellency, Czar Elmer, ruler of all the Fudds.

I am writing to inform you that after lengthy discussions with the Brigades Priest, and hearing multiple reports from the Peasantry regarding the local leadership of Dahra participating in vile, heretical, acts of witchcraft and demon worship I am taking a force into Dahara.   Being an Officer of conscience and faith, I am ordering the Polish Brigade (to include q horse battery) along with 4 Regiments of Peasant volunteers, (that I have equipped at my own expense), plus 2 Regiments of local Cossack volunteers, as well as  the Brigade Priest supplemented with additional Priest skilled in the art of exorcism sent from the Church to assist in this investigation, into Dahra.  By the time your Excellency receives this missive, the above fact finding force will be moving  into Dahara at 18B24 with the intent of seeking out these witches reported to be practicing their vile craft in the Village located there.

I confess that I am doing this under my own initiative and without any consultation with your Excellency.  I realize this is akin to treason by not seeking your permission first.  I will present myself to you for punishment as you deem fit upon our return.  However, I ask that if we find proof of this heretical activity, your greatness will take that into consideration when determining punishment.

I further state that I take this action on my own initiative.  The Officers and Troops under my command are simply following the orders of their superior officer as any good solider should, and I plead that you not take your wrath at me out on them upon our return.

I remain always your most loyal servant, but I have a higher obligation to follow my faith.

near map reference 20A21

Greetings to your Excellency,

In some measure of apology for overstepping my position, I report the first glorious successes of our punitive raid upon the unholy so called 'Prophets of the Light' in the southern seacoast province in Dahara.

Utilizing the quick sketching talents of the regimental artist, this series of vignettes shows the head of the column making its way over the wooden border bridge on the way to the Wyndmere village cluster.

We actually crossed at 20A21.  It was closer to my estates.  This will have little to no effect on the mission, the country is lousy with these heretical ministers!  So far we have recovered over 500 ounces of silver and 50 ounces of gold form the 'monastic' centers of heresy.  These treasures are being sent to the provincial capital for the Royal Assessors and Collectors of the Holy See to direct as fitting. 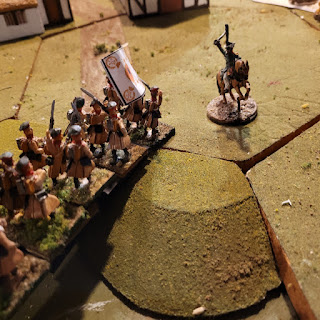 Here is the column commander, Col. Exorcistski, directing the troops. 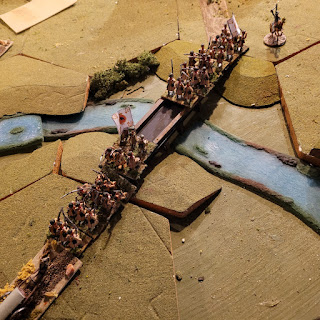 It is said that the Colonel raced across the bridge to be the first Fuddlander  across.

"The column is shown in good order and well supplied.  The force is to collect heretics, not to antagonize the local peasants," Monseigneur D'Arbitrage   (attached to column.) 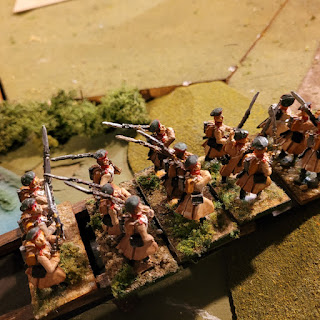 The high spirits reflected in the opening of a campaign.

The column consists of regulars, Cossacks, and militia from the Colonel's own estates.  Pictures of the contingent from the church are to be presented at a later date.

Posted by pancerni at 11:08 PM
Email ThisBlogThis!Share to TwitterShare to FacebookShare to Pinterest
Labels: Imagination campaign

Hmmm....religious intolerance is always a good source of justifications for war and destruction - will be interested to see where this incursion leads.....staying tuned!

Looks like some good old fashioned plundering on the part of Exorcistski, along with a bit of personal aggrandizement?

Although to date he is my favorite character spawned by this campaign. Then again, Barry has a knack....so I should not be surprised.

Thank you both for the kind words.

Very good....plundering and religious cleansing sound like worthy excuses for independent action...but can he collect enough gold and silver and eliminate enough heretics to appease the Czar's wrath ????....Regards

A force comprised of cossacks and militia. Definitely up for some plunder. It should be fun seeing how they progress.

Clearly the good Colonel understands that Silver and Gold are two of the Pillars of the Fuddland legal system (for the aristocracy). For the Common Peasant, the legal system tends to focus much more on the Pillory than Pillars.

Heard in the Court in Orbajosa: "Some people say that the religious practices of the Dahrans release devils which then infest the local flora and fauna, with unearthly results. They say this accounts for much of the strange goings on lately. That's what they say, I'm told".

Orbajosans take their vegetables and their Catholicism very seriously. They also note that the famed Orbajosan Garlic is well known to be especially effective against the creatures of Darkness... or is it those spawned by "the Light".