Roger (the survivor of the"Winsted Chainsaw Massacre"  was over,Greg on a long weekend away, so with only two to please, we selected a quick scenario, 'Get Shorty!'

Roger tried the Order of the Broken Cross, I fielded the Poles Defenders of the Crown.

Lots  of door bashing, a wall or two battered down by Longinus, crummy shooting by both sides.

Too wild and woolly for photos, except this one: 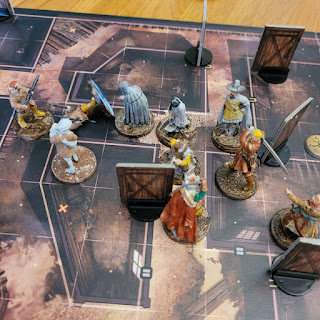 Volodovski is about to kill Fritz, Longinus wound Sigfreid, a dragoon kill a knechte.  Willem gets a go result and has succumbed to the Order's blandishments.  By game end, Agatha and Sigmar were in full retreat and the  remaining knechte giving cover.

A good game, we are forward looking or either a campaign of AD1666 scenarios or micro-armor modern warfare.