Roger ..... The long suffering friend who has shared  more wasted time  :-) with me than anyone else has launched his blog.  This promises to be fun, and will no doubt correct many of the falsehoods I have provided over the game reports all these years.  He has faithfully played the bad guys in any scenario needing such a role. 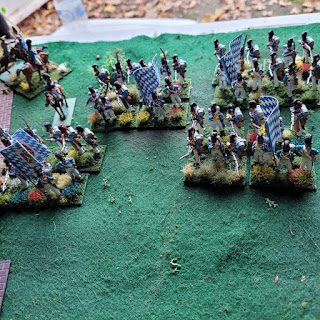 A small sampling of Roger's Bavarians proxying for Daharra in a recent battle.

He is also to blame for starting the recent fantasy elements in our imagination campaign. ( Is fantasy in imagination an oxymoron?  You decide.)

He will post some of his extensive records over the next few weeks, and hopefully add the gadget so we can follow his blog.

Posted by pancerni at 6:39 AM
Email ThisBlogThis!Share to TwitterShare to FacebookShare to Pinterest

I will take a look.

I am off to check it out too!

I'd better head over!
Best Iain

You guys are great!

Dropped by to Roger's for a visit myself; help him add that widget! :-)